On 15 April 2013, I spoke to an author who claims he’s held more jobs than any sane person should admit to — singing in a band, selling shoes, managing a financial institution, throwing newspapers, and designing military manuals, to name just a few. He also hosted a syndicated radio show for ten years, worked in theater and television production, taught both grade-school and college classes, and worked in multimedia for a major computer firm. He is co-founder of an interactive television company, and is currently writing comic books and film and television scripts as well as novels. [drum roll]

WELCOME TO THE LIMELIGHT, TAD WILLIAMS.

WARNING: THIS IS THE LONGEST DARK MATTER INTERVIEW EVER.

At nearly two hours, Tad amazed me with his awesomeness. During the course of this interview I felt some hero-worship developing or at the very least a bromance (yeah, I know, but there isn’t another word with quite the same connotation). Get your popcorn, sit down and enjoy this interview with a really interesting author who may have missed his calling as a public speaker. MP4 and MP3 versions at the bottom of the page. Enjoy.

My planned interview questions as always are not guaranteed nor are they necessarily in the order in which I wrote them, but here they are. I think I asked all of them. 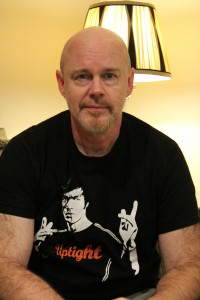 What books and authors have influenced you?

How did you start writing with all the other distractions in your life?

Why did you write Tailchaser’s Song?

After Tailchaser, you started writing a story set in Ancient Egypt: how did you get from there to here?

wolfbrother94 Will he ever write a series based on the adventures of Josua and Vorzheva’s kids, which was alluded to in To Green Angel Tower?

CRYMTYPHON I have no questions; but an observation:

When he is writing well, his characters are good, his dialogue excellent. His plotting is well timed. But the power of his writing is more concentrated in one ability, than in the others: narrative description.

The Otherland series allowed him to describe new scenes like a kaleidoscope turning. They never grew stale. It was a tour de force that made me want to skip the hero, villain, and story-line; and just wander through one world to another.

In your panel on Saturday you contrasted your original interpretation of Otherland with your realisation in Germany after the last novel was published: would you like to share the contrasting stories?

dagnarus75 I’m curious how he feels about if Otherland has stood the test of time, especially because it’s so technology-based.

mage2k How is development on the Otherland video game progressing?

What has it been like to see your work developed into a computer game? Are there aspects of the process that have bemused you or fascinated you?


[For information about Otherland being optioned by Warner Bros, see Tad Williams’s page.]

rrspjames Is the Otherland series ever going to be made into audio books?

Dolores Anderson How do you keep all the plots flowing and correct time wise in your series with larger central casts?

Meyer_Landsman How did the idea for the Bobby Dollar books come about? It’s ballsy to write about a backstage pass to the after life. Did you just feel like writing urban fantasy, or did you come-up with the idea first?

Ahrounmoon How do you feel about each of your respective works? Is there one that was your favorite? Is there one that you struggled with more than the others? Of your completed works, are there any that you feel differently about now looking back at them than when you were initially working on them or when they were first completed?

unsubscribeFROM How does editing work for him? Maybe a dull question but I’d love to hear an in-depth answer.

Nizzleson One of the things that I love about Tad’s work is that his characters can be almost annoyingly human. Renie loses patience with everyone all the time, Theo whines, Simon makes rookie mistakes again and again, Barrick is a jerk with a chip on his shoulder, and Bobby Dollar is a cynical dick who drinks too much. Even the extremely cool-headed Binabik is a bit racist. With all these very human foibles in mind, who does he regard as his most complete, fully-fleshed, believable and relatable character, and why? Which character is most like Tad Williams? And which character would Tad most like to go on a camping holiday with?

What is the thing at the top of your bucket list, either as a writer or as a human being?

Is there anything you’d like to say to fans?