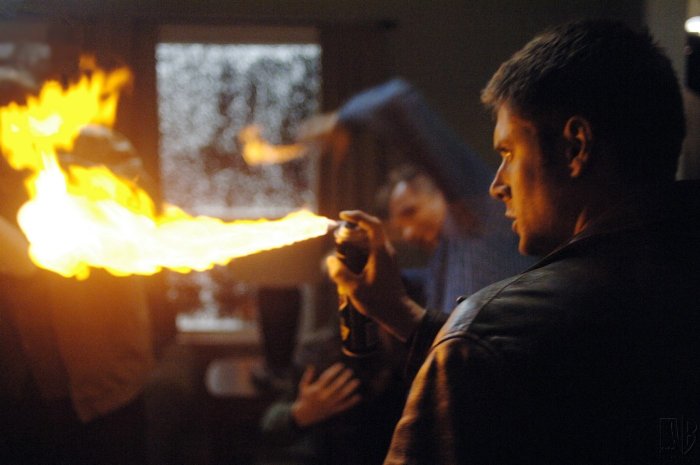 It’s been a while since I posted a Peanut Gallery commentary. Bec, CJ and I are watching Supernatural together as part of Geek Girl Day, a supposedly fortnightly event where the 3 of us get together, we catch up, we eat, we celebrate all things geeky. CJ is a long-time fan of Supernatural so she’s proselytizing Bec and I. Bec and I had actually decided to watch Supernatural, we just hadn’t got there yet. We’re also living under the threat of watching Sharknado so 11 seasons of Supernatural can distract CJ from her mission in life: to convert us to love of really cheesy horror. Either that, or Supernatural will convert us.

I should add: we’re all Australians. Why does this matter, you ask. Because Australians tend to mock, take the piss and generally shit stir when we love something. If an Australian doesn’t say anything or react to something in any way, it’s a bad sign — because boredom or indifference is purgatory for TV shows. Supernatural has our love, which is growing. Especially during last Geek Girl Day because the one-liner jokes sparkle. We loves them!

Anyway, on with the show. Which begins with a man down a hole yelling “Help me, I’m trapped. I broke my ankle.”

CJ: Of course you did. Oh yeah, that’s broken.

R: Why doesn’t he get other people to help?

N: How about the mystery of the hole appearing?

Sam and Dean interrogate someone like police or journalists.

N: And he’s not tipped off that they’re not relatives? They sound more like reporters.

CJ: Or detectives or something.

Dean gets Sam to go down the hole.

R: You’d think with all the shit in their car they’d have decent rope so they wouldn’t have to use the hose.

The Winchester brothers go to Larry Pike’s (the real estate agent’s) barbeque. The sales reps try to sell them a house. “…any race, religion or creed or…” says the real estate dude to Sam and Dean.

Yep, real estate dude thought the brothers were gay. And we learn that the housing estate is new, built on Native American sacred burial grounds.

N: This is poltergeist.

[uproarious laughter from the peanut gallery]

“Do you think he’s our Willie?”

N: What, two between the two of you isn’t enough willie?

N: They broke into a house to stay overnight but they’re parked outside although there’s a garage.

A spider appears in Lynda’s home. She continues showering.

R: As if you’d leave it. I couldn’t sleep in there until I’d hunted it down and killed it.

Lynda has a spider shower and dies. The next day the Winchester brothers drive three blocks. They don’t walk because they have to exercise their outer beast.

CJ: It is pouring down with rain. Look at the water in the gutters. They can’t have good drainage.

The brothers investigate Lynda’s home and find some spiders.

N: That’s because THEY ARE. (Shortly after watching this episode of Supernatural I had a run in with a spider in my home that looked like a live version of one of these rubber spiders. Now I’m not so sure.)

The Winchester brothers meet up with Matt, whose tale of paternal conflict strikes a chord with Beta Brother. Having bonded with the kid, the brothers follow Matt into the woods where he shows them lots and lots of insects converging on a specific site.

N: They don’t hurt anything.

Dean puts his hand down a hole.

CJ: Oh it just got a hell of a lot worse. That’s a weird shirt. In one shot it looks purple but from the front it looks paisley. And now it’s wet!

N: I did mention Poltergeist really early on, didn’t I?

CJ: You guys were ok when he picked up the stick insect.

“You need to leave.”

N: Because your backyard is full of cockroaches.

They don’t leave. Why? Because they’re stupid. And MONEY.

CJ: That’s the sound of BEING WRONG.

CJ: And tell them what? She doesn’t know anything.

Dean picks up a can of Raid.

Bug spray. On ALL THE BUGS.

N: He’s got to be getting low on fuel.

Dawn creeps over the horizon at the last minute. The sun’s first rays herald the end of the Seige of Insects.

Bzzz. An insect survives. Will there be a sequel?