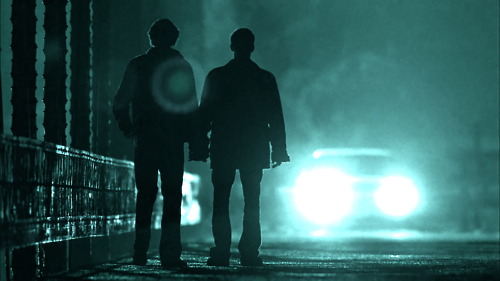 Commentary. Not a musical. May include spoilers.

Once upon a time a couple of months ago, 3 geek girls [eh hem] WOMEN got together for a Geek Girl Day. We planned to watch geek TV programs or movies. CJ has already seen all of Supernatural and has a definite LOVE for Dean and Sam. Rebecca and Nalini (me) hadn’t seen Supernatural but were interested in checking it out.

And so it began.

Initially I did the peanut gallery thing. I felt a bit self-conscious because I’M TALKING THROUGH THE PROGRAM. But I find horror difficult to deal with, especially the kind of blood dripping from the ceiling, dead women bursting into flame, that kind of horror. CJ & Rebecca seemed ok with my flapping mouth.

We got together again and watched more of the thing.

Somewhere along the line we decided to watch ALL THE SUPERNATURAL. And to commentate together.

Unfortunately I didn’t start taking notes until episode 5 so the first 4 zodes will be notes on the series with the (other portions of) the peanut gallery added via email. Starting in episode 5, commentaries will be based on notes from the 3 of us mouthing off while watching.

Sam (Jared Padalecki), the good-looking younger brother, has hot-chick girlfriend. Dean, the embarrassing but very sexy older brother (Jensen Ackles, formerly Alec as in Smart Alec in Dark Angel) shows up to play. Their father has gone missing so Dean wants Sam to help find their dad. Also, Dean wants someone to hold his hand because he doesn’t want to do this alone. Aaaaw.

The acting. The acting is SO. CHEEZY.

I know Jensen Ackles specialises in his frowny eyebrows; he did that a lot on Dark Angel too. But still! I also know Ackles can act better than that! I conclude that cheesy acting was a directorial choice — especially knowing people like CJ LOVE their cheesy horror. Supernatural began aiming at that market. I wonder how long they anticipated the series continuing; 1 season? 2 or 3?

In real life I would despise someone driving a gas guzzler like that. But on TV? In this type of show? Let’s just say “Shades of Angel” but, obviously, the brothers need an actual roof to the car. Because otherwise the demons might get inside.

The music. The music is SO. COOL.

The pilot establishes the brothers’ backstory while they interact, while they rescue some damsel in distress and when they return home so Sam can see his girlfriend. Clips from the pilot episode form part of the recap in every episode so far and CJ assures me that doesn’t change. To catch the full story-arc of the series, the pilot is essential viewing.

Even if I did have flashbacks while trying to go to sleep that night. It reminded me of the aftermath of watching Poltergeist when I was a teenager… Nightmares and wakeful creep-out for months.

BOOM! I jumped during the zode. CJ and Rebecca REALLY ENJOYED THIS.

I put down my drink when I thought I was going to be scared… and splash it everywhere [shifty eyes].

CJ is in luuuuurve with Dean and Sam. Not the actors who play them. The characters. However, she’s aware of the dynamics: Dean is the alpha brother and Sam is the beta brother. This becomes more relevant over the zodes I’ve watched so far as their relationship dynamics are a huge part of the success of the series: their relationship brings drama, comedy and heart to the series.

I think, in the end, CJ and Rebecca were nearly as entertained by my jumpiness as by the zode. On twitter, Rebecca talked about torturing me with further zodes. This was the beginning; the beginning of our voyage through Supernatural and the beginning of beautiful friendships.

And torture. Don’t forget the torture.