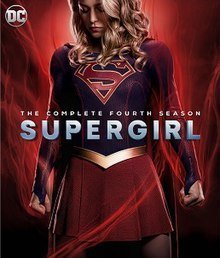 Kara (Melissa Benoist) flees her home planet of Krypton in a space ship minutes after her cousin was launched, heading to Earth. Her parents tell her to look after her cousin but, because of a freak accident, she arrives years later when her cousin has already come out as Superman. Superman meets her and takes her to a foster home where she becomes Kara Danvers.

Initially Kara hides her superpowers because her stepfather works for the government with a deal that ensures her safety for now.

She’s restless, wondering what would happen if she came out as Superman has done, plus she wants to fly again. Then her foster sister, Alex Danvers (Chyler Leigh) is on a plane heading for disaster. Kara does a Sully, landing the plane in the river so everyone gets out alive.

Thus begins Supergirl’s double life: working for Cat Media as assistant to Cat Grant (Calista Flockhart) while popping out of work now and then to save lives and, in her spare time — when she’s not watching videos or playing games with friends — she practically lives in a secret government lair working to keep humanity safe.

Kara loves her sister, Alex, who also works for the secret government organisation under J’onn J’onzz (David Harewood), who’s also an alien in disguise. What is with it and the arbitrarly apostrophes in aliens’ names? Sheesh.

Kara’s best friend is Winn Schott (Jeremy Jordan), the IT guy at work who she’s known forever and who has a crush on her but he’s totally friend-zoned. Which is ironic because he lectures her about being friend-zoned by Jimmy Olsen.

Oh, yeah. About Jimmy Olsen: (Mehcad Brooks) grew up and changed his name to James. Superman’s bestie has moved to Kara’s city to work for Cat Media and, in this incarnation, he’s a total hottie. Kara has a major crush but he’s still entangled with Lucy Lane (Jenna Dewan Tatum), Lois Lane’s little sister. It’s complicated.

Cat Grant is a total bitch but she’s also pretty awesome. She’s a millionaire who owns multiple businesses, every one of which is run by a woman because she headhunts the best women for the job. In her role on Supergirl she’s a bit contradictory: the biggest baddest bitch in town while also playing Perry White to Supergirl’s Clark Kent persona. As if women didn’t already struggle with the “have it all” syndrome.

Calista Flockhart is good in the role but I suspect her contract has CLAUSES. On my 55 inch TV she often has that CGI computer-game-character look; even her neck has fewer lines than her 20-something co-stars and glows with superlative lighting or, more likely, Photoshopping. Although she hasn’t been completely reworked to look like a 20-something, she’s not far from it. It’s a bit sad. I prefer Maggie Smith’s growing old disgracefully to Calista Flockhart’s attempts to stay young. (And yes, I know there are decades between them, but it’s the principle.)

The plots are, as always, unrealistic and varying in quality. Some plot holes are laughable. The series would be helped if it didn’t take itself quite so seriously but then I’m biased towards a lot of humour in superhero stories.

Relationally, Supergirl gets down there with soap operas. I’d go so far as to say it is a fantasy soap opera.

However, Supergirl passes the Bechdel Test with flying colours. Even more than that, Supergirl is Feminism 101 for the uninitiated and for young adults. Some of the worst stories had the best feminist Easter eggs. I’ve never seen a TV show like it.

Supergirl is at least on a par with if not better than every other DC TV series. I was over Arrow fairly quickly — the endless flashbacks to the island grew old fast — so I only kept watching because my partner wanted to watch it with me. Ugh. Flash started well then EVERYTHING was solved with speed, no intelligence required. I longed for the good old days of McGyver.

In contrast, Supergirl has various powers and must learn to use them in a variety of ways, making mistakes along the way. Although I’m not a fan of soapies, I found some — most? — of Supergirl‘s relationship dramas (boss, sister, love interest, best friend) engaging.

Supergirl is feminist fantasy, lighter than some other superhero fantasy stories, aimed primarily at young adult women although catering to other tastes too. The producers know their market and are targeting well. Recommended.