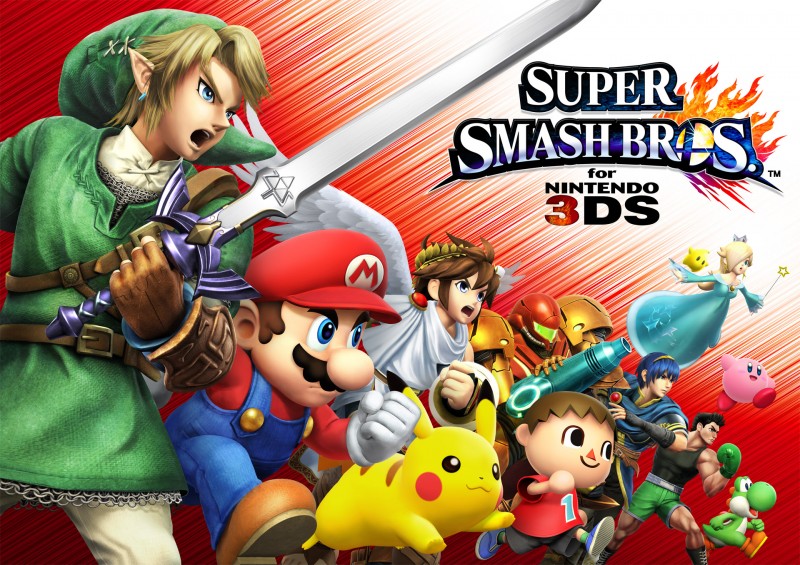 The Super Smash Bros series has been around since the Nintendo 64 days. I was there from day one. Although I wasn’t a big fan of the Wii version of Smash Bros, when news came of a series release for the Wii U and 3DS, I was sold. After a year since Pokemon X & Y my 3DS was beginning to gather some dust, but thankfully the dust has been wiped clean. And, testament to the quality of Nintendo products, my 3DS XL still held a charge.

When it comes to plot for Super Smash Bros, just forget it. Consider this your favourite Nintendo characters coming together and fighting their way to victory. Forget health bars and finishing moves, SSB is all about beating your opponents enough so that each subsequent hit knocks them further and further out of the arena. A lot of skill is required to make sure you don’t suffer the same fate, however, each punch throw is done with a cheer and a smile as 30+ years of Nintendo history (should that be gaming history?) is played out on screen.

I mentioned characters from Nintendo back catalogue. You’ll find over 50 playable characters, ranging from Mario, Link and Donkey Kong all the way over to other franchises such as Mega Man (AWESOME) and Pac Man. And lets not forget Nintendo’s biggest rival back in the glory days, SEGA. They join the fight with the blue hedgehog himself, Sonic. And if you think you’ve seen quick characters, I’m looking at you Fox, you haven’t seen anything yet.

What I enjoy about the characters are the different colours on offer. Although most are a simple colour swap, sometimes it actually switches the character from a different game in the series. So an example would be Samus from Metroid series has her normal colour but, with a few quick changes, you can suit her up in the Metroid Fusion armour. This doesn’t change how she plays, but it does allow you to personally (hopefully) find the look you prefer. It goes a long way to tailor Super Smash Bros you and you alone.

Each fighter in the game can be customised. When I heard this I was sceptical. Would it throw out the balance? Would it gimp some characters while allowing others to perform godlike actions? Well, yeah it does all that. But that isn’t a terrible thing. You see, each fighter can be customised to your liking. Since I really enjoy using Link for his many different types of attacks, I decided to focus his abilities on brute strength. Having only 3 blank slots on offer, I was able to place all strength assets into the slots bumping him up into a real heavy hitter. Doing so made Link’s defence and speed extremely low. So, after a few battles, I fixed that.

This feature allows for some wonderful fun. I wanted to play around with this some more so I made Donkey Kong a speed-type. It was really funny to watch him moving around on screen knocking people all over the place, but his hits packed little punch.

Customisation can even be carried over to your Mii characters. With a total of 8 empty character slots, you can really mix and match a Mii to focus on fists, swords or guns. From there you can do the same as a regular character. It is an ingenious feature that I wish was added into other Nintendo games. Mario Kart 8 kind of does this with kart customisation, but I wish it was with characters also.

Super Smash Bros layout a mixed bag. While all the options and game modes can be found from the main screen, they aren’t all ON the main screen. Nintendo has made the bold choice of hiding play modes within sections and sub screens. Single player modes are split from multiplayer; training modes and mini games are divided into other menus. Smash mode and classic mode are broken into different screens while online mode is in another screen altogether. It is a clunky layout and one that will have people missing some modes of play.

I am a little surprised at Nintendo for this. It is a real issue for me as I’m constantly swapping between screens just to find new modes. It took me and my partner about five minutes to find the menu screen to get into a two player battle, and we were only two seats apart from each other. Even yelling and directing each other on where to go, didn’t help. Eventually I had to have both 3DS in my hands to ‘find’ the play mode. It was a little problematic especially when we tried this after 5 days of owning the game.

Still, after a week or so with the game, I now have fewer problems with the menu screens, but I really wish Nintendo broke the main screen into Single and Multiplayer menus. That way everything would be completely self explanatory.

If navigating menus upsets you, don’t worry because Super Smash Bros has some of the best video game music on offer. Although the main screens have that same generic tune, the fights themselves are amazing. I recommend playing with headphones. I had a smile from ear to ear as the classic Star Fox theme kicked in, and memories came flooding back as The Ocarina of Time theme played. Just amazing amounts of music on offer. I even spent an hour or two in the music selection screen just playing each piece from beginning to end and selecting my favourites.

Since this review is for Super Smash Bros on the 3DS, I think it’s only fair that I discuss the cons of what the handheld can offer. Forget the menu screens which I’ve already spoken about, I’m talking about the handheld itself. Smash Bros has always been about ‘smashing’ the analog stick all over the place to perform power attacks, or smash attacks. With the 3DS analog slider, smashing attacks can often leave you feeling like you’re going to break the slider. At first I wasn’t that worried, but after a solid two months of playing, I’m beginning to feel like the slider has lost the sturdiness.

Plus sometimes when trying to pull off a smash attack, using the slider (no other options for movement), it only works about 7 out of 10 times. This can be a major pain in the butt especially when it can be the difference between winning and losing. I’ve often gotten to the Master Hand battles as the end of classic mode on high difficulty and lost because the slider didn’t work for a smash attack. I know it could be down to me and how I’m performing the move, but I don’t feel this would be an issue with an actual second analog stick. I guess if you own the new Nintendo 3DS XL, good luck to you. I’ve been hearing the second analog button works perfectly.

Another negative against the handheld itself and Smash Bros is the size of the 3DS screen. I’m using a 3DS XL and with four players on the screen at the same time, just forget it. 90% of the time I have no idea where my character is as I’m totally lost in the mix of characters jumping and moving all over the place. While using Donkey Kong during a 4 player game, I was running toward the group and during a smash attack I was completely lost in the mix. I thought I was thrown backward when Donkey Kong was on the other end falling out of the arena. I had gotten mixed up with Captain Falcon and have no idea how that’s even possible.

I’ve found that 3 characters on screen works perfectly and, even then, you can still be lost in the mix. I can’t fault the game, but I can blame the handheld itself. This isn’t something which can be fixed though, as Super Smash Bros is all about big battles with crazy action.

One thing worth mentioning is the 3D effect. I’ve never been a big fan of 3D on the unit. Usually I get a headache after an hour or so, but after many hours with the slider on to full, I can happily report I have had no ill effects. And worth mentioning is the fact the game suffers no form of slow at all even with 4 characters on screen at once. 3D on to full effect, music up loud and a few massive items being used. Not one single drop in frame rate.

With the release of the Wii U version of Smash Bros, I’ve come to appreciate the 3DS version a lot more. I think it’s the pick-up-and-play factor of the game, or maybe some of the different game modes on offer. Either way, if you own both copies, you’re in for some fun. With the 3DS, you can connect it up to the Wii U and use it as an extra controller. Great for 8-player smash. Plus all your charactered Mii and fighters can be transferred between the two systems.

Super Smash Bros series is one of the best fighting games released and on 3DS it’s even better because now it’s portable. Don’t get me wrong, the game has its faults and issues with getting lost on screen during big battles and that does hurt 4 player mode, but it is still incredibly fun. I’ve tackled a few people online and experienced minor issues with lag, but I’m hoping that was only a problem with my internet and not the game itself.

Either way, pick Super Smash Bros up if you want to play an enjoyable fighting game. Even with the downsides, the pros easily make this a MUST buy.

4 out of 5 stars; a smashing good time