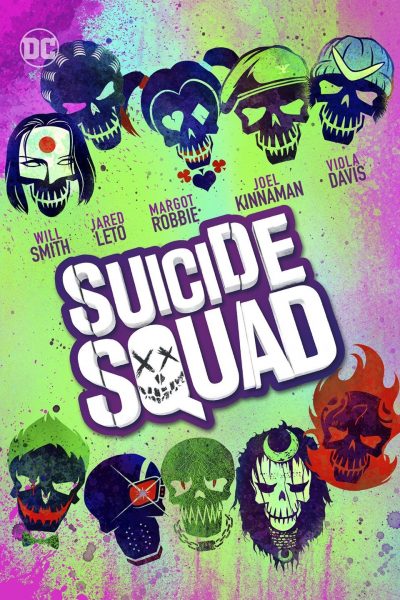 Amanda Waller wants to put together a new kick-ass team to beat the next Superman in case he’s not as altruistic as the last one. She presents her selected team: Harley Quinn (Margo Robbie), Deadshot (Will Smith), Killer Croc (Adewale Akinnuoye-Agbaje), Captain Boomerang (Jai Courtney), Katana (Karen Fukuhara), Diablo (Jay Hernandez), Enchantress (Cara Delevingne), Rick Flag (Joe Kinnaman) and some more military goons. Waller gives a brief overview of all the superheros’ — oops, supervillains’ — origin stories and how they happened to fall into her governmental hands. The Joint Chiefs are coy then the chair gives the go-ahead because nothing can possibly go wrong. (eyeroll)

The first thing that happens — with very convenient timing — is that Enchantress gets loose and runs amok in spite of Waller holding her heart and, therefore, allegedly controlling Enchantress. She releases her brother from his supernatural prison. Together they start to build an army and a weapon to take out humanity.

Our anti-heroes are geared up and choppered in, only to crash and burn — would you believe roll? — when landing. When they file out, Harley says, “What a ride!” Apparently she approves.

The team is supposed to rescue an unknown person from in the zone so in they go, guns blazing, talking double-cross but, with self-interest in mind, they play along. Those who don’t obey get their heads blown off by little incendiary devices implanted into their necks. How original.

What follows is a romping superperson movie with a soundtrack that is very occasionally kick-ass (they spent the budget on 2 songs?) with a couple of (predictable) twists along the way. Is a plot-twist a twist if you know it’s coming? Who cares? Superperson movies are usually as predictable as romances: there’s a formula and if it deviates too far from the formula, you lose your audience. Meanwhile, the audience who might like something very different won’t watch it because they’re expecting it to be formulaic. Suicide Squad sticks to the formula.

My main complaint with the Suicide Squad is how few women are in the DC universe but, all things considered, they haven’t done too badly when including the women, it’s just that most barely get a look-in unless attired for the male gaze. Harley even strips (not shown) then redresses herself in that costume in front of loads of men, all staring. The camera returns to her clad in fishnets, micro shorts and a bra, in the process of donning her tee shirt. There’s no better way to say, “We’re including women but, ladies, you’re window dressing”. Enchantress is more modestly attired for the beginning of the movie then strips into a belly dancing costume for Act II and the climax. Katana is lethal and not scantily clad so she has little screen time and fewer lines.

However, I nearly started bouncing on my seat when Deadshot has a moment with his daughter — WHO MIGHT JOIN THE DC SUPERPEOPLE WHEN SHE’S A BIT OLDER. I will be extremely disappointed if she doesn’t.

Suicide Squad doesn’t do badly by people of color with a diverse cast, however, Waller is ruthless, Diablo murdered his wife and kids (origin story), Deadshot is a cold-blooded killer, Killer Croc is painted as an animal and most of the rest of the cast are white men. Katana is ruthless but she’s painted as being on the right side of the law and fighting for justice and humanity (I think). I’m not a person of color — my disability is due to insufficient pigment, ha ha — but I think Suicide Squad represents better that most movies although I have reservations. I predict flamewars over white people cosplaying as some of the characters of color.

Suicide Squad is a fun superperson movie with a kick-ass soundtrack and lots of splodeys although it’s thin in plot where it’s not holey and the characters are two-dimensional. It’s no Deadpool or Guardians of the Galaxy — Suicide Squad needs more humor to make that category — but it’s about as good as most of Marvel’s movies in the past several years. I’m giving Suicide Squad 3 stars. Please spare us any more Jared Leto.

Roadshow Australia provided DMZ with a review copy: DVDs and blurays will be released soon.