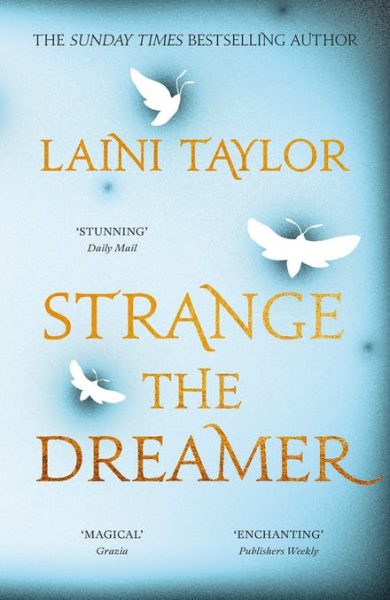 Strange the Dreamer is Lazlo Strange’s nickname because his head is in the clouds and his research is in the mythology of his world: fairy tales, myths and the lost city of Weep. Lazlo was one of hundreds of orphans during a plague in his home city, hence the name ‘Strange’, given to orphans. He grew up in a monastery then, when sent to the library on an errand, he never returned. Once he was found, the librarians said he could stay because ‘if the library steals a boy we let it keep him’.

Now Lazlo is a young man, a second class citizen in a city where wealth buys scholar status. His research was stolen by Thyon Nero, a scholar and the queen’s favored godson. Lazlo isn’t allowed to apply to travel to Weep when an ambassador comes seeking assistance. However, Lazlo seizes the opportunity to step forward, begging for a place in the train upon their departure.

In Weep, Sarai is trapped a floating citadel in the shape of a seraphim. She screams magical moths each night and traverses the distance to the ground embodied in the moths. When moths alight on a sleeper, Sarai enters their dreams. She calls herself the Muse of Nightmares because, in the beginning — after a horrendous massacre — she retaliated, wreaking vengeance on the city below. Now, after 10 years of entering dreams, she understands why humans felt compelled to murder the gods and Sarai’s people, blue-skinned godspawn. Now she enters dreams to learn and to inspire fear of the citadel, a form of aversion therapy in the hopes of being allowed to live in peace or, at least, to be allowed to live.

Sarai’s ‘family’ comprises 4 other godspawn with various powers and some ghosts with solid form. They live under The Rule: they will never give sign of life to the city below so the humans won’t come to kill them. However, events have overtaken them all.

Sexytimes as a passtime

A couple of young adults demonstrate their interest in sex without romance to scratch an itch and occupy their time. This is also written with some complexity — more layers — but without judgement as such. One character’s final comments on the matter are … enlightening. Healthy.

Set in the same universe from which Laini Taylor’s angels and demons emerged in Daughter of Smoke and Bone, Strange the Dreamer has a pre-existing framework but it’s not necessary to have read the previous trilogy. So far only mention of Seraphim and demons link the two separate stories.

Like in Taylor’s previous trilogy, I love the racial (species?) tensions in Strange the Dreamer. Taylor’s exploration of racial tensions, particularly where there’s been a history of racial abuse and violence, is cogent and thought provoking without being judgmental. Even Minya, who comes across sometimes as a child, sometimes as a sociopath, is complex and — when considering her backstory — somewhat sympathetic, even if only in a limited way. One of the greatest strengths of this portrayal is that ‘blue skin’ is not code for ‘not white’: most of the humans have black hair. Lazlo’s grey eyes and Thyon’s golden hair are so unusual they deserve emphasis. I evisage characters ranging from Saxon to Asian to African.

In the city of Weep many people have disabilities. Before the uprising 15 years before the main action of the story is set, the gods used to take humans up into the citadel. Many returned with disabilities in body (missing parts), mind (post-trauma) or both. For two centuries the populace lived with the horror of oppression that made a huge impression on their psyche. No one is ‘inspiring’ because they’re disabled; they’re just people who sometimes have a difference. One woman in particular has a missing hand, a point of discussion because she hosts Lazlo, a stranger to the city. She’s not inspiring because of her disability (a missing hand); she’s inspiring because she’s sassy and forthright, a middle-aged or elderly woman who’s an influential side-character. (Can I get a ‘HELL YEAH’?!)

I’m ambivalent about the prologue: it gives too much away and yet it adds to the tension. Considering where the novel stops — cliffhanger! — I guess it’s good to be prepared.

Strange the Dreamer is part Cinderella, part Rapunzel and part Romeo and Juliet. Lazlo is Cinderella but it is his assertive actions that free him from his servitude, leading to an adventure. Sarai is Rapunzel trapped in a floating citadel instead of a tower but, again, she is an active agent reaching out, she’s no passive princess waiting for a prince to climb her hair. Lazlo and Sarai are Romeo and Juliet, lovers caught on opposite sides of a war, both with agency. Strange the Dreamer is a magical coming-of-age story with romance in spite of adventure and events running out of control. I love this story.

NOW I NEED THE NEXT INSTALLMENT, STAT.