Trigger warning: spoilers and ranting about Stowaway. By me. You have been warned.

The Hyperion takes off for a two year mission to Mars with 3 personnel on board, Captain Marina Barnett (Toni Collette), Doctor Anna Levenson (Anna Kendrik) and the science guy David Kim (Daniel Dae Kim). During launch their rocket uses excess fuel, which is a concern. They nearly abort but go ahead. Then they discover the cause: stowaway Michael Adams (Shamier Anderson).

Michael was on the launch team. He was knocked unconscious for over 12 hours and received a gut wound. This ended up with him trapped inside a tiny space with their life support equipment. And I mean BOLTED inside, Barnett got power tools out to release him. Which begs the question: how the fuck did he manage that?

We never learn how or why this happened. I figure someone had to knock him out and stuff him in there as a form of sabotage if he wasn’t a saboteur himself. However, the captain makes an offhand comment about how “he seems genuine” and the matter is dropped. Also, they continue on their merry way to Mars without even considering food, water and oxygen supplies.

Then the captain investigates the life support equipment and determines that it’s totally munted, crapola, kaput, and not serviceable.

THIS REVIEW CONTAINS SPOILERS ALONG WITH MUCH RANTING. YOU HAVE BEEN WARNED. AGAIN.

The good news is that the ship can, miraculously, support 3 people with the use of algae they brought for experimentation on Mars but it cannot support 4.

Then half the algae dies.

Because science guy is apparently incapable of seeding new algae from the first batch, he used all the algae he brought for his experiments on Mars. So the other half, their final supply of algae, dies.

Now they have oxygen for 2 people and there’s 4 of them.

So far I’ve only had a dig at actual plot holes and irritants in what purported to be a hard scifi movie. But there are so many other things to rant about.

The stupid design of the ship, from “because we need this set” design to a few very fragile solar panels suspended at the null gravity point between two craft tethered together, spinning to provide gravity.

Let’s unpack a little that shall we?

Essential solar panels without which they’ll lose power permanently are so fragile that bumping them could cause a catastrophe. Space dust and debris anyone? Amazingly, the storm at the end – that blew green glowing dust around the ship – didn’t seem to affect the FRAGILE IRREPLACEABLE solar panels.

Two craft tethered together go to Mars but one isn’t in use. Maybe the secondary unit was the launch module that would normally get discarded? It had oxygen in itso they have to space walk there to fetch the oxygen, using empty tanks they just happen to have on hand, for just this purpose. But no one is otherwise using this alternative craft.

Oh, and when they get there, the door to where they access the oxygen HAS NO HINGES. It falls off. Probably because plot because if the door could close, they wouldn’t have been able to justify the next “because plot” sequence.

Essentials they forgot to pack

And don’t get me started on “we have no sealant or, apparently, material or anything with which we could prevent loss of oxygen after plugging into the system to retrieve the oxygen. So of course we’ll plug in the gauge without a tank attached to release loads of oxygen before we even send the tank the last bit of the way…”

Stowaway’s representation of women is good: they’re the doctor and the captain, both competent and caring. Representation of people of color is poor. David, the Asian, wants to kill the stowaway or get him to kill himself ASAP. And the stowaway Black guy seems nice but apparently he’s launch crew, stupid enough to get injured and trapped (and the organization was poorly organized enough not to notice). I guess his representation was ok: he had a rough life, looks after his sister (their parents are dead), and is working towards his dreams.

I’ll stop now. Otherwise you won’t even be able to hate-watch the movie if you choose.

Stowaway is one of the worst scifi movies I’ve watched in a while. Afterwards, I said “I’m giving this two stars”.
Hubby said “that’s generous; why?”
I replied, “Because the acting was good.”
Hubby: “Oh, ok, fair enough.”

Stowaway could have engaged with actual science. But apparently the real-life ground crew supporting Apollo 13 in 1970 were too fabulous – or the writers just couldn’t be arsed watching the damn movie – to factor in to this story. Stowaway could have explored Cold Equations themes but didn’t have the capacity. The ending vaguely reminded me of Melancholia but Lars Von Trier at least explored the human condition and was “Literary” in his writing. These writers? Meh.

The writers don’t know shit about space. (Safety lines? Not a thing. And that’s just ONE of the basics that had me hurling abuse at the screen.) They probably aren’t into speculative fiction as a personal interest. According to IMDB, writers Joe Penna and Ryan Morrison worked on some shorts then Arctic (6.8 stars) and Release, a TV series that rated 5.9 stars.

I don’t know how Joe Penna got this caliber of actor involved in the movie but no actor, not even Morgan Freeman or Helen Mirren, could save this script.

Rotten Tomatoes is surprisingly forgiving but critics say “Pacing problems prevent Stowaway from fully engaging, but it’s distinguished by its thoughtful, well-acted approach to a story built on an excruciating moral dilemma”. And RT audiences say “Although it’s well-acted and beautifully filmed, this cleverly conceived sci-fi drama is undone by its predictable, drawn-out story and a frustrating ending.”.

Me? I want to know if the movie budget extended to polishing the reviews because no way should this be “fresh”. Given IMDB’s rating standard (viewer beware of anything rated below 7), I think Stowaway‘s rating of 5.6 is fair although maybe a bit on the generous side.

Instead of watching Stowaway, I recommend The Fare: it’s a thinky style movie written by a scifi fan who’s “in the industry”. 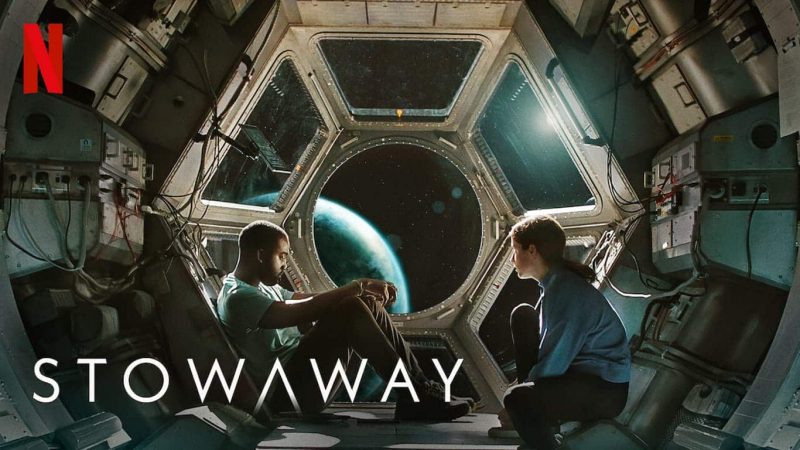