If you want the video without the talky text, go to the Stormdancer playlist.  Otherwise, read on and the individual videos are embedded at appropriate points in the text.

Last night I was on twitter, planning a quiet evening in playing Guild Wars 2, when Jay Kristoff mentioned the launch of his new novel Stormdancer, a Japanese steampunk novel that Patrick Rothfuss has recommended.  Here’s the book trailer.

I remembered seeing something about that launch but it wasn’t in my Facebook calendar or in my Outlook calendar – whew! Ok, I haven’t committed to attending, maybe I was thinking of another launch and I wasn’t invited to this one.  I sent Jay a ‘Goodluck’ and a ‘guiltless wave’, then Braiden Asciak told me it was at Dymocks on Collins Street and I should come.

It was 6:10 pm.  The launch was at 7pm.  I live about an hour from the city on a good day, whether that is getting the minion to drive and park or catch public transport.  I was not ready to go out: no make-up, in jeans and a hoodie.  Even then I guess I was pretty decent for slopping around at home because I wasn’t wearing revolting but comfortable trackies.  I looked at myself in the mirror, cringed, then thought of covering the launch and putting it up on YouTube.

We were out the door in a couple of minutes.  The minion drove to Caulfield where we were planning to catch the train into the city: this was a bad move.  We wasted about 10 minutes driving up and down the car park and the street looking for a parking space then walking back to the train station, only to discover that Hawks and Magpies fans all had the same idea.

When I got on the train, two dickheads were sitting sideways in their seats so their feet and knees were about 10 to 15 cm apart across the aisle (that’s 4 to 6 inches for those not yet living in the 21st Century).  When I walked between them, I tripped over their feet and nearly fell, catching my balance just in the nick of time.  The minion was carrying my camera, so all was good.

When we got to Richmond the football fans poured out of the train taking close to five minutes to get clear, while I’m looking at my watch, cursing the football.  Or my lateness.  Or something. Just wanting to bang my head against something, possibly the train window.

Eventually we arrived at Flinders St Station, where we bustled off the train and down the stairs, only to find that Bloody Metro (their full and correct name, I swear! >.>)  had blocked off the exit.  I had to find the stairs to platform one and exit from that platform…  Getting even more stressed…

We arrived at 7:20 pm for an event that was due to start at 7pm.  People were standing around, talking and laughing, drinking and eating.  I think this was the best spread I have ever seen at any launch or opening: wine and Japanese beer, catering from Pie Face and a few other places.

Once we found a familiar face – Braiden – we learnt that the speeches hadn’t started.  Yay!  I got my camera ready for a quick set up, and looked around trying to spot familiar faces while chatting to Braiden and the minion.

I saw a few faces that looked familiar but I couldn’t place them.  Later I realised that maybe I’ve seen them at Swordcraft events.  I haven’t been back to Swordcraft yet, but I’m planning to do a video (hopefully with camcorder and not a DSLR, fingers crossed for new job very soon) and showcase their awesomeness.

I spotted Nathan from Of Science and Swords, and even pointed him out to the minion.  It was so funny, I recognised the face (not the usual way round) and I’m pointing at Nate, describing his tee shirt so the minion would know which in the group I’m pointing at, and the guys around Nate are clearly picking up on these signals, looking at me uncertainly then looking back at Nate, not really knowing how to react and Nate was oblivious!!!  Later he walked nearby and I waved and called out, only to see him walk up to Amanda and chat.  I gave up.  I figured I’d get to him eventually, and couldn’t believe that there was someone out there more oblivious than me.  When he finally saw me much later, his eyebrows went up, his mouth dropped open, he looked so surprised, it was really funny.

After being told that the guys from Of Science and Swords were there for the launch, I was straining looking around for other people I knew.  I saw a ranga whose hair had a life of its own, and thought that might have been Avi, but no: the guy was too short, even if his beard was strikingly similar.

When the launch time came, Jay broke protocol.  He leapt up on to the stage and started talking without an introduction.  The first bit of the video of Jay’s speech is wobbly while I get the tripod set up in record time: it is all Jay’s fault.  Just for the record.  This time the minion didn’t take the tripod out of the car or anything!

Jay’s speech was serious and funny; I think the best part is where Jay – possibly accidentally – sets the audience to laughter and comments when he says he’ll thank his wife properly later.

Afterwards the speeches, people mingled and chatted some more, queuing to get Jay to sign their books.

Just before my camera battery died, I got this.  Apparently this guy, Andrew Glouftis, played poker with Jay.  The stakes: if Andrew won, Stormdancer would be dedicated to him.  If Jay won, Andrew had to wear a copy of the book all night.

Before the night was over but sadly after my camera batteries died (I did mention that I wasn’t planning to come, right?) I chatted to Jay and got his autograph on my review copy of Stormdancer plus the kiddies picture book that was a freebie for attendees!  Apparently the picture book was a baby gift for his editor, and they had a limited run printed for the launch.  It’s so cute. 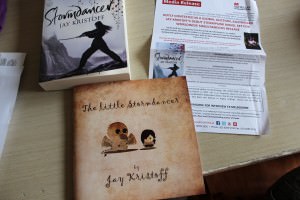 As Dymocks closed up, everyone migrated to the Robot Bar, a little Japanese sushi bar off Flinders Lane that serves delicous warm sake.  Braiden, the minion and I tagged along and checked out the place.  Braiden, who had a few cameras on him and no issues with dead batteries, took photos.  Braiden took one great shot of this mobile with lots of robots casting shadows on the wall behind; hopefully he’ll post to his website later.

Braiden also told me about this.

Once I get organised, I will have a giveaway of autographed Stormdancer bookmarks.  Soon.

Meteor is one year old in two days. He moved in with us in February after being rescued from the streets and malnutrition by @canberrapetrescue. He’s still timid: I’m sure he had a bad experience before he was rescued, but now he’s spoilt rotten and a little overweight. Instead of keeping their kibble bowl full we started rationing their kibble. Since then I think he lost a little fat and has grown even more. He loves games, allows pats and tries to open our door during the night because he wants snuggles and pats on our bed. We compromise: he can come in after 6am. #cats amiright?

Aurora turns one in three days. This is her today, after pointedly knocking the brush off the tv unit. @canberrapetrescue #cats #catsofinstagram