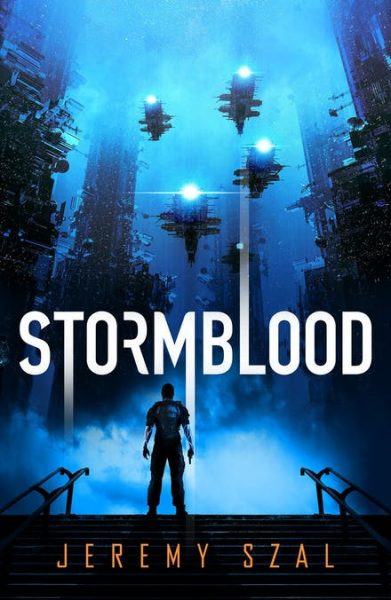 Vakov Fukasawa is half-Japanese half-Russian from a planet that is entirely Asian. He explodes onto page one on this asteroid in a far-flung deep space future in his robotic armor (think Iron Man). Vakov is pumped full of alien tech called Stormtech so I guess his is stormblood. His sidekick, Grim, an irritating nerd, has his back when the chips are down alongside the bombs and other splodey items.

Stormblood-filled people, called Reapers, helped win an intergalactic war for the good guys, known as Harmony. Although, between dialogue, flashbacks and Fukasawa’s musings, you have to wonder if the good guys were different to the bad guys. Now Reapers die in singles and en mass because someone is messing with their stormtech.

Fukasawa robbed a boss-gangster’s home and met boss plus two henchmen on his way out the front door. Kowalski, a Harmony agent, rescues Fukasawa from the ensuing beat-down. She brings him to her boss who manipulates Fukasawa into doing her bidding.

Reapers (war veterans) and skinnies (those addicted to stormtech) are dying. Someone is poisoning their stormblood via drugs used to treat addiction to the alien technology. Vakov already established a detective noir ambiance while robbing boss-gangster’s place so why not actually become a good guy detective? Especially if it means helping his brother out of a jam and getting citizenship for his sidekick Grim.

Gender representation is diverse although it seems Szal may have written all men then gender-flipped some roles. I’m ok with that, especially in the context of this novel. However, I admit I sped-read this door-stopper so I may have missed some finer details.

Szal talks about the stormtech as if it’s another character requiring its actions, moods and observations made separate to Fukasawa. Also, the stormtech seemed sentient and possibly even psychic by the end. This will appeal to some readers, not to others.

Strangely, the stormtech is both an alien entity seemingly separate from the bodies it inhabits and it’s a drug ensnaring its users. I found this contradictory and confusing. However, this ambiguity – especially coupled with veterans’ PTSD – enriches Stormblood.

You can’t get much more splodey than Stormblood, which I’d describe as a splodey detective noir. Or a noir-type book of splodeys. Actually, probably the latter. There are more splodeys than detecting in my opinion.

I’m flagging that race is a feature of Stormblood. Where is the line between representation and misappropriation? Fukasawa isn’t overtly a samurai, Szal avoided ninja tropes and there are a range of races. I’m leaving this one to an Own Voices reviewer and hoping Stormblood gets a stamp of approval.

Stormblood is the whisky of speculative fiction. It’s the kind of book you’ll love and want to try over and over and in all the related flavors or it’ll be the book you need to dilute as a mixer or you’ll loathe it. Just like whisky. Szal is not concise. I usually read Every. Single. Word – sometimes more than once – when I’m reviewing. Although I enjoyed the opening 200 pages as a bit of nostalgia, hearkening back to the SF I read in high school and in my 20s, I confess the pacing, laboring the stormtech’s point of view and the flashbacks impelled me to resort to speed reading. Not to mention that my TBR pile is threatening to topple onto my keyboard.

And, I confess, I prefer my melodrama to be ironic or comedic. Too much melodrama inspires dusting off the speed-reading skills. But hey, even the splodey robotic dude books need their fair share of melodrama, amiright?

Stormblood is the splodey book of many dudebros’ dreams although Szal includes women as soldiers and bosses. With stomping armor and loads of explosions and shoot outs and even armor upgrades, Stormblood is the Pacific Rim of books – if Pacific Rim was of LotR length. Stormblood is just as flawed and will be just as beloved as Pacific Rim (Pacific Rim Honest Trailer here) by those who love their Judge Dredd in space books. Melodramatic musings take this novel from the Starship Troopers genre into Space Opera For Dudes. Throw some drug addiction and a family feud into the pot and you have a spicy gumbo. Great for those who can stomach it, not so good for those with fragile tummies. The novel, at 538 pages, is a workout for those still in lockdown.