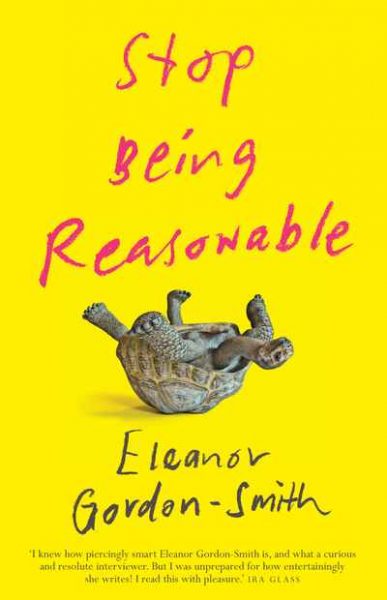 Gordon-Smith is a philosopher and reformed debater. Her mind was changed. She says it’s time to stop being reasonable because coherent logical argument is futile when money-hungry agent provocateurs sell their souls and those of their audiences in exchange for cash and fame.

A variety of anecdotes

Each chapter of Gordon-Smith’s book presents accounts of change or refusal to change by real people. She ventured into Sydney’s notorious Kings Cross to interview men who cat-called women and, in the process, she was (literally) picked up and spun around, sexually harassed and assaulted. Dylan left a religious sect that habitually shuns members for mild transgressions (like drinking or smoking) and that excommunicates those who left; Dylan’s story, his struggle, is told in bite-sized pieces while discussing belief. We hear from the wife of a pedophile while Gordon-Smith balances trust versus evidence in relationships. An adoptee learns of his adoption. Nicole as a child was separated from her parents during a bitter divorce with repercussions reverberating down the decades. Stop Being Reasonable is a short book packed with anecdotes illustrating philosophical quandaries.

During her investigation into cat-calling, Gordon-Smith says women’s words are lost… missing. Men do not hear women when women say ‘we fear you when you harass us in the street; we fear that you will escalate from words or whistles to rape or murder’.

Men reply, ‘But I’m a good guy, I’m not like that’. They continue harassing women in the street in the hope that doing the same thing over and over will eventually render different results. Men dismissed Gordon-Smith’s words or changed her words — her fears — not on face value but as personal accusations. ‘You are accusing ME of being a rapist?!’ So her words are missing or re-invented, reinterpreted. Throughout Stop Being Reasonable Gordon-Smith discusses how different people — people who are not straight white nondisabled men — suffer because their words are ‘missing’ or reinterpreted.

Reason in the face of unreason

Gordon-Smith urges us to stop being reasonable, to stop giving air-time to neo-Nazis and apologists for ‘honor-killings’ because to entertain ideas is the beginning of the process of normalising even the most repugnant of codes. Her use of real stories to illustrate philosophy and social issues is so engaging that I would have completed the entire (nonfiction) book in one sitting had I not been interrupted.

It is time to stop being reasonable. Gordon-Smith’s book is an inspiration for me and I hope it will be inspirational to others too.