Next is the Stella Young Award. Stella Young was a disability activist who died too soon in 2014, aged 32. As an activist, Stella made quite the impact. Her TedX speech is “I am not your inspiration”. In her gentle and polite manner, Stella railed against the tendency of nondisabled people to use disabled people as inspiration. Particularly the “if that disabled person can do that, then I can do this” trope. Disabled people, when not portrayed as villains “because defective body symbolizes character defects”, are often used as inspiration by nondisabled storytellers who too often win awards for “inspiring” writing and, when portrayed by nondisabled actors, for the acting.

Thus the Stella Young Award goes to a story representing disability, potentially educating about disability, but without “inspiration” and other patronizing overtones.

Why “the CripLit Keys”?

I just realized I probably haven’t explained the name of the awards. I wanted something like “Nothing about us without us” but the acronym sounded too much like Nauru, the site of a concentration camp for refugees. The same in Latin was not memorable. I agonized for months if not years; the name of these awards was part of the reason I hadn’t had the courage to launch them.

Finally, I settled on “CripLit” because of “SickLit” and “KidLit” etc placing it firmly in the ranks of a genre. Also it’s a nice short hashtag.

And “CripLit Keys” because I believe good representation of disability is one of the most important keys to unlocking the doors that are currently bolted and barred against people with disability. Fictional representation demonstrating disabled people’s abilities land nondisabled acceptance of disabled people works wonders as role modeling and bibliotherapy while breaking new ground. Just look at classic Star Trek: within decades of Classic Trek we had mobile phones; within 15 years of Next Gen, we acquired touch screens. Not to mention some of the barriers to minorities falling after Uhura and Sulu featured on the bridge with acceptance from their colleagues.

Good consistent representation of disability can work wonders for disabled people too.

Jo Spurrier’s books consistently include disabled characters. Each and every one of these characters is consistent. There is no character with a shattered knee who, by sheer willpower, walks up a flight of steps and wins a fight against a villain. Sometimes characters can exceed their normal capability, like the senior Blackbone witch, Aleida, in Daughter of Lies and Ruin. Sometimes, through use of magic, Aleida can briefly function as if her feet are not disabled. However, there is always a cost to using this magic, rendering Aleida exhausted and ill for some time afterwards. Many people with various types of disability can identify: it’s possible to push ourselves beyond our limits briefly but there is a price to pay. For me, it’s headaches and worse than usual vision, sometimes for hours, sometimes for several days.

I love that Aleida is an active, significant character with a consistent disability that reflects – in some ways – my personal experience of disability and the experiences of other disabled people with different disabilities.

And Daughter of Lies and Ruin is, I believe, Jo Spurrier’s fifth book. Every one of Spurrier’s novels represents disability in various ways, with every character’s disability consistent and relatable.

It is my pleasure to award Jo Spurrier the Stella Young Award for representation and education without inspiration. 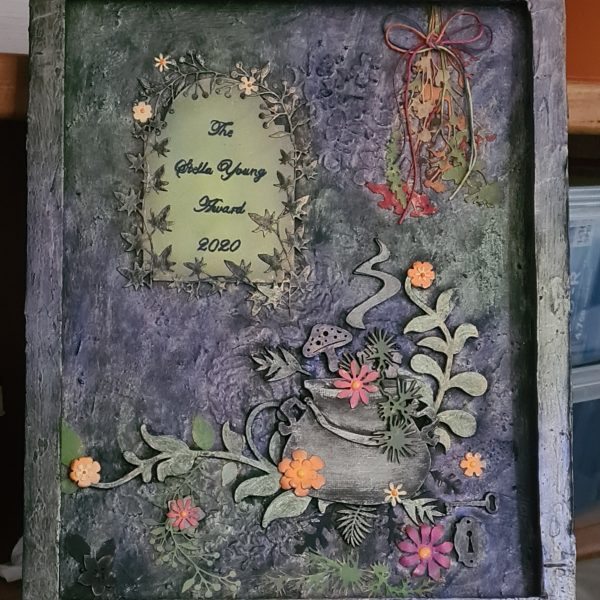 About the Stella Young Award itself

The text printed onto thick watercolor paper, die cut. And then I glued three layers of that paper together to give the award itself more “weight”. I inked the award to age it using, I think, Distress Inks rustic wilderness and vintage photo.

How do I reference the novel? The protagonists are witches who brew potions and sell them for their income so I thought a lovely big cauldron and lots of herbs would do the trick. Also, for background texture, I used a stencil depicting roses and leaves. Using texture paste I stenciled parts of the image in a diagonal down the piece. As always, I glued a lock and key in the bottom right corner to reference the CripLit Keys in the hopes that good representation will continue and will model – and cause – unlocking and opening of doors currently barred to disabled people.

Instead of the scrollwork, for this award I glued scroll-like leaves cut from craftwood and – as usual – painted them black along with toadstools, leaves and flowers.

Other flowers and leaves I cut from either black cardstock or Neena Solar White cardstock that I inked using Distress Oxide Inks in various colors. My colors were largely inspired by  this YouTube tutorial by Kelly Latevola Taylor because I love the colors she uses in this card.

Edward, by this stage, was in the habit of helping with the layout. By the time he sat down I’d already glued a lot of it in place but he completed a significant portion of the layout of smaller leaves and flowers. However, we had an argument. I thought the top right corner needed more and suggested a bunch of herbs hanging from the ceiling as is common in homes of people drying herbs and flowers. He disagreed.

So, without gluing them down, I assembled a bunch of flowers and a bow made from jute to hold them together.

He was like “OOoooh, now I understand” and worked his magic, making it all look tidy and bringing it together.

I also took my courage in both hands and used crystal drops to create dimensional centers for several of the flowers. As a precaution I *may* have done this before The Great Gluing Event, just in case I made a mess and needed to replace the flowers *before* they were glued. Maybe.

After the Great Tissue Problems of the Donna Haraway Award and the Paul Darke Award, hubby dug in his singlet drawer and located a singlet with holes (! seriously, the guy thinks wearing clothes without holes is pretentious! We’ve TALKED about this!!!

). So, when I buffed the metallic beeswax, I didn’t have any problems with tissues or kitchen paper towel “bits” being trapped in the final piece. YAY! Although, this time, I found the craftwood buffer piece holding the backing board away from the glass wanted a bit of the tissue action from me cleaning the glass. Some days I just. Can. Not. Win. Sigh.

Anyone who reads this far is A True Legend and should pass Go, collecting $200 along the way. Thank you for bearing with my rambles. I hope you’re enjoying these awards and, even more, I hope you read the book winners! Thank you for joining me, have a Happy New Year and stay safe.