I read Stealing Time in a few chunks because I can’t read for very long at a time without a break and – during that break – I was distracted by “interview this” and “review that”. Distractions, shiny toys, etc; I might just be part cat.

However, Stealing Time stole my attention. It’s common for me to put a book down and forget about it. This story – a story of evil people stealing life to sell to wealthy people – has all the ingredients to keep me interested.

A sympathetic drug dealer – now I’ve read it all

Marisa, a drug dealer (?!) is A SYMPATHETIC CHARACTER. Admittedly the drugs she deals – time tabs – are as “light” as cannabis and just as beneficial to certain people. She gives some women living in poverty extra hours in their day. They are forced to work 60 hour weeks to be allowed to live past 40. These extra hours mean they can sleep then spend quality time with their kids.

Marisa also attends soirees with wealthy women who “need” time tabs so they can party until the wee hours of the morning then meet their personal trainers at 6am. These same women flaunt their excess – water fountains in a mansion’s foyer is one example – as a “fuck you” to a climate change devastated and overpopulated world.

And yet Marisa is a sidekick, not a major character.

Stealing Time is a “hard” SF story in that it’s character and plot driven but with an integrated technology system crucial to the story. Bowyer uses the life clock trope that I think first appeared in Logan’s Run (1967, the book, followed by the adult movie then a PG-rated TV series and very definitely NOT the 2013 movie). This trope expands into the ability to manipulate perceptions of time in the time tabs.

Because plot Bowyer has a thing called a Time Lock that is kind of like characters living on time tabs with their time sped way way up but there’s a portal from that world to the outside. And, thanks to that portal, we know the characters inside the Time Lock are living in a time-stopped world but the portal exists in real time so, effectively, crossing the portal is time travel… My brain hurts.

Bowyer has taken existing tropes and put an interesting spin on them. There are flaws in the logic but the characters and focus on the protagonists – while other people chase the villains – is an interesting twist.

The plot vs the characters

Mothers, scientists and police race against the clock to save children’s lives. Varya, one of the central characters, is a brilliant but flawed woman. She drives herself to save others while also being her own worst enemy. As my understanding and empathy grew, Varya’s secrets emerged and, in a rare feat of writing, I sympathized instead of yelling at her and thumping the couch cushions. (The cats are grateful.)

Her mother takes up a few chapters chatting to us about various things; she’s delicious. I’d love to do coffee with this woman.

I’m a fan of Chekov’s gun, the rule that when a gun is placed upon a stage in act one, it must be discharged by act three. Conversely, I’m not a fan of books that introduce key characters in act three, something that I’m pretty sure happened in this novel. Bowyer had all the ingredients though.

Stealing Time is a good speculative fiction novel featuring strong characters, most of whom are women trying to care for children, for each other, and for the downtrodden. This novel has representation of disability as a plot point and motivator for key characters, a trope of which I’m not a huge fan. Also, in principle I oppose the use of Paul Darke’s normality genre. (Where the disabled person either assimilates or is removed thus removing the disability-inspired conflict for nondisabled people.) But, in this case, I wanted this ending thank you very much. Stealing Time is not perfect, but it’s only Bowyer’s second book. She is an author to watch. I recommend Stealing Time for those interested in specfic and time-related stories or if you just want a good escapist read.

If you enjoy Stealing Time, you might also enjoy Earth Girl, another spec fic novel that incorporates social issues into a romantic adventure. 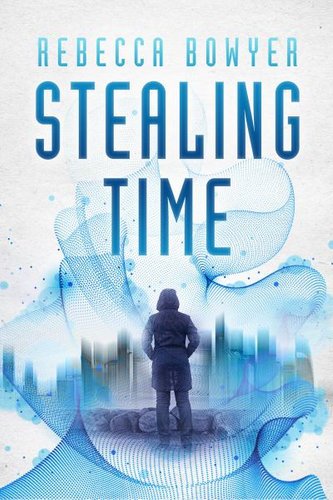