After the settling dust of the demon uprising and two years of peace, rumblings from the Menzoberranzan drow have Jarlaxle nervous. Worried his allies may be pulled into a Civil War between the great Houses, he is eager to ensure Zaknafein is armed with weapons befitting his skill, including one in particular: Khazid’hea. A powerful artifact, the sword known as “Cutter” has started wars, corrupted its users, and spilled the blood of many, many people. Nonetheless—or maybe because of that—the rogue Jarlaxle and a small group of friends will go on an expedition looking for the weapon’s last wielder, Doum’wielle, in the freezing north, for she may be the key to unlocking the sword’s potential…and perhaps the key to preventing the bloodshed looming over the Underdark.

And as they explore the top of the world, Drizzt is on a journey of his own—both spiritual and physical. He wants to introduce his daughter Brie to Grandmaster Kane and the practices that have been so central to his beliefs. But, having only recently come back from true transcendence, the drow ranger is no longer sure what his beliefs mean anymore. He is on a path to determining the future, not just for his family, but perhaps the entire northlands of the Realms themselves.

And no matter the outcome of either journey, the Realms will never be the same again.

Starlight Enclave continues the Drizzt storyline that already consists of at least 36 books. Salvatore assumes a wealth of knowledge from the previous books and probably also from the Dungeons and Dragons game and numerous book series.

For example, neither characters nor races are described. Although I’m familiar with orcs and so forth, I’ve never heard of Drow before. Also there were a lot of mixed species people so I’m curious about what they look like.

In this vein of focusing on telling the story and not expending many words to describe scenes, Starlight Enclave reminds of what I think was a Timothy Zahn Star Wars trilogy from the 90s. If it was Zahn’s trilogy, it would have been the Heir to the Empire books. The earlier book/s seemed to be mostly like chess moves in an interstellar war. The final book focused more on characters with descriptions. Readers seemed equally divided over which books were better: the chess-moves interstellar war or the character-focused book. Those who prefer the former will love Starlight Enclave.

I loved the Dragonlance Chronicles by Margaret Weis and Tracy Hickman back in the day. It’s been a long time since I read them. Therefore I don’t recall how much they relied on assumed knowledge or how vivid their descriptions were. I do remember vividly visualizing a scene outside a tower in a snowscape, but whether that was based on authors’ descriptions or my own imagination I am unsure.

As someone who hasn’t been following developments in Dungeons and Dragons for a while, I am confused. I don’t know what species Drow are, what mixed breed species look like, or whether the king mentioned is a puppet, ruling council, figment of magic or a gestalt being. Starlight Enclave is the latest in an extended series of Drizzt books that, in my opinion, need to be read in order.

Starlight Enclave is written for Drizzt fans, Dungeons and Dragons aficionados and Salvatore fans. I am confident they will devour this novel and the rest of the trilogy. And even in Australia, the publisher is releasing a hardcover version to adorn your bookshelves. 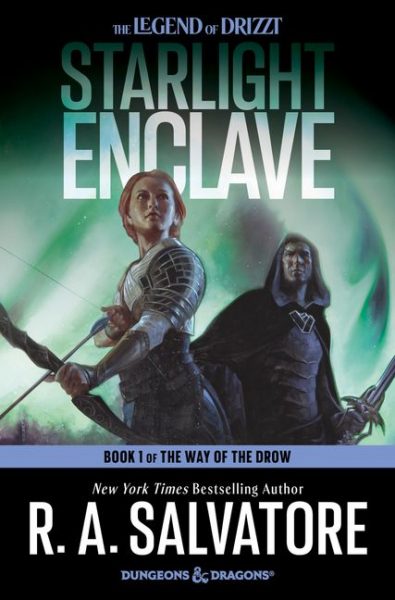