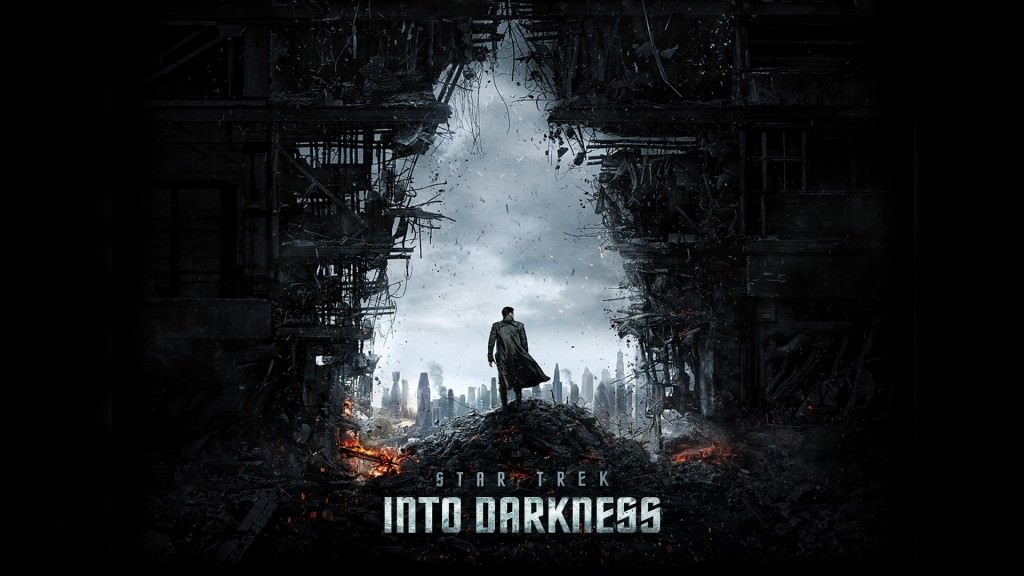 I take my life into my hands as I review Star Trek Into Darkness in the full knowledge that too much information will result in a lynching. This would be regrettable. I, especially, would regret this. So, what can I say? HOW MUCH can I say? I will take great pains to review the movie without spoilers.

The prescreening was held at the awesome IMAX cinema with the world’s third largest screen. At the last minute I received an email telling me that, due to problems with the distributor causing delays, the movie would not be showing in the full-screen film version but would ‘only’ be shown in the slightly smaller digital version. Tragedy! Should I skip this prescreening event and wait until Thursday for the full-screen film version?

So it was digital and not quite as big. It was still a Star Trek prescreening. I would like to see this movie in IMAX 3D film to compare the two experiences, but if it was a choice between digital and waiting, I’d prefer to see it NOW.

A few weeks back I posted about the tour at IMAX and seeing Oblivion. Part of the entertainment that evening was a nine minute trailer for Star Trek. The trailer was mostly the first several minutes of the movie (although not quite in the same order of scenes) with added spoiler-y shots, some from quite late in the movie.

Having managed to MOSTLY avoid spoilers I went in to Star Trek hoping that ST2/12 would be as good as ST1/11.

Has consensus been reached in what we’re calling this reboot series in shorthand? *sigh*

I decided before I saw ST1/11 that I was not going to like the reboot. Too many Hollywood reboots/relaunches/re-imaginings and not enough original story-lines and genuine creativity. Besides, HOW COULD THEY RECAST SPOCK? AND SULU? AND CHEKOV? Nope. I decided I would HATE it. And Sylar from Heroes as Spock? NOOOOOOOOOO.

Much against my will, I thoroughly enjoyed ST1/11. I think Zachary Quinto (the aforementioned new Spock) makes a great Vulcan and I’ll even accept him as Spock, ESPECIALLY as Leonard Nimoy (the original Spock) was significant to the plot.

Anton Yelchin is such an ADORABLE Chekov, I’ll even forgive him for being cast in Walter Koenig‘s place. It’s a tough call, especially after Walt’s performances on Babylon 5 as the evil Alfred Bester, but you never know – one day Anton may even achieve similar acclaim.

Karl Urban as Bones was a delight; I felt he rose to the challenge beautifully. I was pissed off at him for what he said at Armageddon last year about not doing any more SF because he’s ‘done that,’ as if he’s served his time and graduated. I’ll suck it up regardless, albeit with a snigger, as he’s apparently signed up for an SF TV series.

Sulu – meh. John Cho certainly held his own as an actor but he has big, amazing-sounding shoes to fill. Maybe he’ll grow into them.

I have to admit that, for me, Chris Pine has a huge advantage over the aforementioned actors because I don’t have a high opinion of The Shat, his attractiveness or his acting.

Star Trek Into Darkness continues with the same cast, boldly going where so many have gone before in past, future, parallel universes and mirror universes.  2/12 begins in the best Trek tradition with characters consistent with their established behaviours, juxtaposing action with humour, well-laced with SO MANY TREK REFERENCES.

Characters develop during this movie, which is a DEFINITE PLUS. One of my disappointments with the Avengers movie was the lack of character development in spite of Joss’s involvement; it was a fun comic book movie but with no depth. ST2/12 challenges characters, people knock corners off others’ personalities (not always figuratively), and people grow.

The action is Trek is dynamic, utilising the large screen and 3D well. Some of it is spoof-worthy, with spoofs preempting the movie. It is action-y action with SFX galore.

The plot is a exciting and engaging although not entirely surprising: the combination of spoilers on the web and the fact that THIS IS TREK means that some things are INEVITABLE. The non-geek audience won’t notice while geeks will be divided into the ‘love it’/’hate it’ camps as usual. I suspect the ‘love it’ camp and the ‘publicly-deride-but-have-seen-it-multiple-times-at-cinema-and-own-at-least-one-copy’ camp combined will waaaaay outweigh the genuinely ‘hate it’ camp.

[The most spoilery spoiler in this review]

There is a twist. At the end. Some people cried. I didn’t, I sat there thinking ‘the next movie will include…’ but I was wrong.

My biggest gripe: LENS FLARES. Quit it with the lens flares and random light obscuring characters in the foreground already. By the end of the first QUARTER of the movie, I was TOTALLY OVER this as a special effect. Seriously, do they have so little faith in their actors and writing that they need to obscure and distract? By the climactic scene where a character was obscured by a blue light across the neck then a second blue light appeared obscuring the face during a key speech FOR NO APPARENT REASON OTHER THAN: “SFX! LOOK! SFX!” I was almost speechless with rage.

While Star Trek Into Darkness had good female characters treated as equals on the crew I don’t think they managed to pass the Bechdel Test. The majority of speaking roles are still men although a significant proportion of non-speaking roles were women wearing short dresses, even on the bridge. There was gratuitous lingerie that only served to emphasise this.

There were fan services galore: humorous, historical and technical.

One of the saddest things about this prescreening was the FULL CINEMA and most of the time there were only SIX PEOPLE laughing at the jokes. We were all sitting together, in the back row. I get that some of the jokes are for the geeks who KNOW, but many of the jokes are for EVERYONE, even if there is an extra layer added for the geeks. I felt sad for the audience: are they that jaded? Did they feel that showing enjoyment would be unprofessional? COME ON GUYS. WAI SO SERIOUS???

The characters started historically consistent but were challenged and grew. The acting was good; I might even say excellent if only the lens flares hadn’t been so damn distracting. The plot isn’t flawless but it’s engaging and entertaining with humour sprinkled throughout to alleviate the tension. The plot is exponentially better than implied in John Scalzi’s Redshirts, even though redshirts jokes were scattered throughout. The Star Trek reboot has officially broken the Star Trek curse, and it’s not just switching odds for evens. This movie Will. Be. A. Smash. Hit. with geeks and mainstream alike.

For another review that manages to dance around specifics and not give spoilers, see Lilithia’s Star Trek Into Darkness review. Note: there is an embedded video trailer at the top of her page.