The third in the reboot/new universe series, Star Trek Beyond has the distinction of being co-written by Simon Pegg, a science fiction aficionado, fanboy and successful writer in his own right.

The USS Enterprise crew explores the furthest reaches of uncharted space, where they encounter a new ruthless enemy who puts them and everything the Federation stands for to the test.

So, really, it’s business as usual for Kirk and his crew except that Kirk (Chris Pine) is feeling displaced in the black, seeking familiarity by applying for a promotion to a space station. (Deep Space 10, anyone?)

Commander Spock (Zachary Quinto) meets with some Vulcans who tell him his older self (formerly played by Leonard Nimoy) is dead. This is a brief moment, a moving tribute to a cultural icon that is both character and actor.

Chekov (Anton Yelchin) is his usual exuberant self, adorable in all his scenes. I hope the next Star Trek movie pays tribute to his passing and doesn’t merely replace him with another actor.

Spock and Uhura (Zoe Saldana) have broken off their relationship, thank the Pegg-god! Their workplace bickering was enough to put anyone off Trek for life.

Simon Pegg continues to play Scotty, which role is all the more notable for the fact that he didn’t self-aggrandise nor increase the significance of his own role. (Everyone who’s come into contact with Stephen Baxter’s aggrandisement of the Patrician’s role in Discworld plays says AMEN.)

With a ripping plot, lots of ‘splodeys and the crew standing on the brink of immense change, Star Trek Beyond is the most Star Trekkie of all the movies. Star Trek Beyond encapsulates the essence of Star Trek, makes in-jokes and gives fan-service via pop culture references and even goes where Star Trek has gone before: crashing the Enterprise, stranding her crew on a dangerous outpost where the crew must fight for their lives, while said crew is bickering and yelling ‘beam me up’. If you want hole-free plot or a serious science fiction movie, look elsewhere. If you want Star Trek, this is a fantastic addition to the Star Trek series during a bleak year.

AND NO ANNOYING LENS FLARES. CAN I GET A “HELL YEAH”? 😀 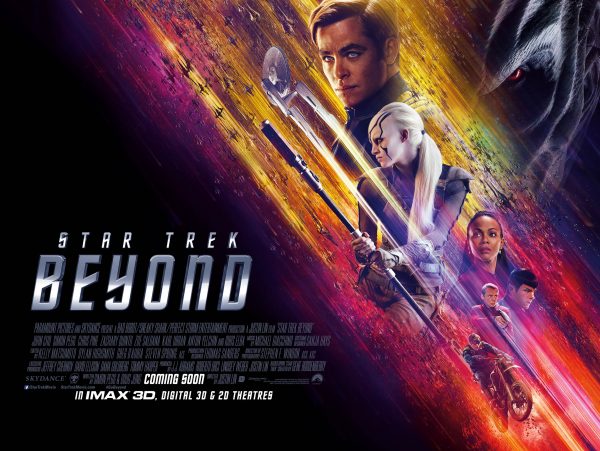