Mara Carlyle is a senior at Covington High School. She’s in pre-calc when seniors start to spontaneous -ly explode early in the school year. No one knows why, there’s no common factor other than being seniors at Covington High.

Mara gets on with life. She has a crush on investigating FBI agent Rosetti and an ambiguous relationship with her BFF that seems to be either mildly bisexual or a male author fantasizing about girls who are friends or both, perhaps? Mara spends her time drunk and stoned while snarking. She fits a boyfriend into her busy schedule and has sexytimes while her peers are exploding all over the place.

In the beginning Mara reads like a sociopath: she’s cold, she thinks the explosions are funny and she does not care about anyone or anything. Then Mara’s voice changes: instead she cares too much, she’s writing a (terrible) novel called All The Feels because feeling gets people killed.

For the first third of the novel Mara is funny along with the blackness and the black humor. Then she becomes repetitive. Students blowing up become tedious. Mara drinking and taking drugs is boring. Mara is boring.

The most spontaneous aspect of this novel is my desire to hurl it across the room. I persevered in the hopes of a resolution or twist, neither of which was forthcoming.

Spontaneous deserves the Bad Sex In Fiction Award for 2016 or, at the very least, to be shortlisted. I have never before read a sex scene that was so irritating or poorly written. “Only” this and “only” that; it makes Charlaine Harris’s win for calling Sookie’s breasts “puppies” look like high literature.

And don’t get me started on the only disabled person in this story. He’s only mentioned after he’s dead so Mara can recap his life and attitude. Labelling it ‘disability inspiration porn’ doesn’t begin to address the problems with this myopic presentation of disability. Worse still, I suspect Starmer was influenced by Me Before You because, in Spontaneous, he says that it’s ok that the disabled person exploded because he was going to die anyway. How do you think Starmer would feel if a family member was hit by a bus and was told ‘He/she was going to die anyway so it’s not a tragedy’? I am sickened and furious.

Starmer may have aspired to write a literary YA novel using spontaneous explosions as a metaphor for senior-year meltdowns but literary novels generally incorporate a better standard of prose. The complete absence of consequences for opting out of life and sobriety (no drug- or alcohol-poisoning and Mara assumes she’ll get into college when she’s ready) normalizes and possibly even encourages acting out. The only compensation is that Mara is a boring Stoner Sloth. The story meanders, the energy dissipates early and the second half of the book is a slog through Shit River, only to be rewarded with a non-ending. The best parallel I can think of is Born on the Fourth of July; that movie was a tedious slog with ‘and then I got saved, hallelujah’ at the end. If Spontaneous has a sequel I am not interested. 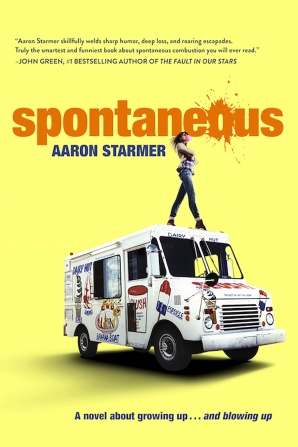