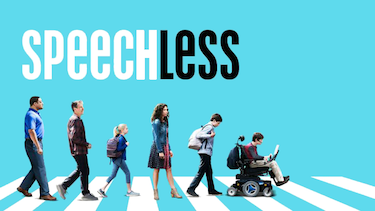 JJ (Micah Fowler) has cerebal palsy in Speechless and in real life. He uses a wheelchair to get around and a speech board to communicate. He’s sharp and funny despite being ‘speechless’. Maya (Minnie Driver) is as nutty as almond milk. She’s JJ’s caring mother who fights for her son every step of the way. Literally. She fights for wheelchair ramps. Jimmy (John Ross Bowie) is the charming and ‘idiot’ (his word) father. Dylan (Kyla Kenedy) is JJ’s younger sister, who loves running and is obsessed with winning. And Ray (Mason Cook) is JJ’s younger brother, a total geek and control freak. Kenney (Cedric Yarbrough) is JJ’s carer and voice.

This endearing family — the Dimeo family — is a much version of Modern Family where the family is much more ‘average’ in terms of income. Speechless also does not feature maternal alienation (mother-blaming for comedic purposes) that drives me crazy in Modern Family.

Accessibility — of the series

For three years I’ve watched the disability community rave about Speechless> while it was not accessible in Australia. Ironic much? After it was cancelled (May 2019 after producing 3 seasons), I discovered iTunes had finally released the entire series. I binged season 1 in two days. At 23 episodes, one season is almost as long as the entire series so far of Santa Clarita Diet. While I’ve loved Santa Clarita Diet (and the minion and I have nearly finished re-watching the series), I love Speechless more. In my opinion, Speechless season 1 is PERFECT.

In the future, when I consume representations of disability like that in Zeroes (Westerfeld, Lanagan and Biancotti) or Elric (Moorcock), I will reference JJ. By the time I review books like these again, I may have seen Speechless so often that I can quote Kenneth and JJ’s comments on misappropriation. You have been warned. JJ IS WATCHING YOU.

Rating: 5 out of 5 stars
Season 1: 23 episodes of about 21 minutes each; 3 seasons in all then the series was CANCELLED.
Creator: Scott Silveri