Turangaleela commented in response to this article on the Guardian:

When I was at art school I was told that the 30% rule applied: no artwork should exceed 30% of content or reference of anyone else’s art; to exceed 30% opens the second artist up to allegations of copyright infringement.  It appears that Games Workshop has not only acquired the idea of Space Marines from a rich history of science fiction literature but they may also be well in excess in of 30% of the content of the original artwork on the left.

The artwork above on the left is one of the current covers for Starship Troopers, still on sale on Amazon.

But Games Workshop won’t allow an independent author to call a character a space marine.

FakeTSR unearthed Space Marine art dated 1936 with the words ‘The Space Marines and the Slavers by Bob Olsen’ on the cover of Amazing Stories, December 1936.  Thanks Pauline Grice for bringing this to my attention. 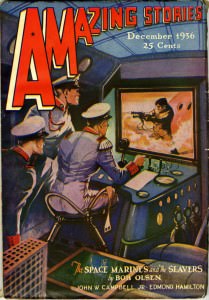