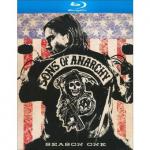 ‘The Charming Brotherhood’ was a panel at Continuum 9 featuring m1k3y, PRK  and Julia Svaganovic discussing the topic: “Sons of Anarchy has been compared to Hamlet and Dynasty, how did a show about a gang of brutally violent outlaw bikies become so popular?”

Although not many people showed for this panel, discussion was energetic with the audience participating [shifty eyes]. There was a bit of talk about season 5, which Edward and I haven’t seen yet. PRK said he anticipates not being able to finish the series, or at least needing a break from it, because it’s going into very dark places.

The parallels to Hamlet were touched upon but generally skirted around as they could be spoilers. Comparisons were made with other TV and written works.

Overall this was an energetic discussion that involved fans of the show discussing their love for the show and their abhorrence of some of the themes.

What do you think? Love or hate the show? How do you respond to issues of concern?