So This is Love is the ninth book in the A Twisted Tale series and it is written by author Elizabeth Lim. I love the idea behind the twisted tale series. Each of the books take a different, and at times darker spin on a classic Disney story. So This is Love is a story based on Disney’s Cinderella. It takes the original Cinderella tale and adds a big twist into the mix… What if Cinderella never tried on the glass slipper?

Evicted from her family home by Lady Tremaine and her stepsisters, Cinderella attempts a fresh start working at the palace as a seamstress. But when the Grand Duke appoints her to serve under the king’s visiting sister, Duchess Genevieve, Cinderella becomes witness to a grand conspiracy to take the king and the prince out of power. Faced with questions of love and loyalty to the kingdom, Cinderella must find a way to stop the villains of past and present… before it is too late. 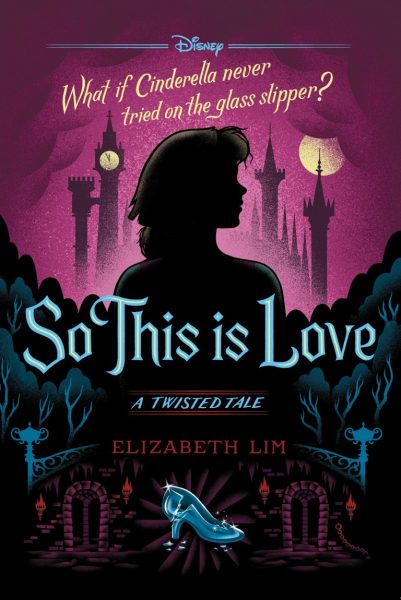 The twist is a big one and I must admit I was excited to read this re-imaging of what was a favorite tale in my younger years. My excitement was justified. This tale was full of twists, turns and suspense. Lim had me completely absorbed right from the first chapter and I could not put the book down, devouring it in one day.

I thought it would be hard to make such a well-known and well-loved tale surprising but Lim achieved this so well. We have all the old characters including loyal dog Bruno and fairy godmother but Lim also introduces a number of new ones and their character development is excellent. I absolutely adored the character of Duchess Genevieve, spiky on the outside but with a heart of gold on the inside. I loathed the villain, the Grand Duke. And Lim’s description of his actions stirred up big feelings. Cinderella’s character is also developed in this re-take. I love how strong spirited she is and her ‘never give up’ attitude works so well in this story.

This story feels like it was just waiting to be told. It takes everything that was great in the original and builds on it. The characters are fittingly developed. New characters really add to the story. The relationship between Cinderella and the Prince is pleasingly fleshed out.

Overall, I am getting a lot of enjoyment out of this series. If you have not yet read any twisted tales, you are seriously missing out. So This is Love is a fantastic place to start as it really can not be faulted. I look forward to more twisted tales by Elizabeth Lim.