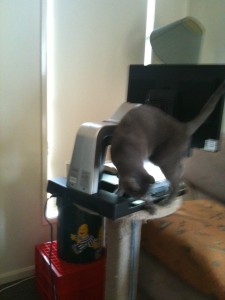 I have been in mourning because I missed reading a book sitting on the couch. Sure, I could read a kindle or a laptop sitting on the couch, but that’s only some of my reading. I receive loads of paper books and, to be honest, I prefer the papery kind. They wave ‘hello!’ and ‘read me!’ unlike electronic copies. Plus they look sexy on my shelves.

Imagine sitting up at your computer to read a paper book. Every. Time. You read. That’s pretty much my life.

Until. John Birmingham posted a pic of his ‘standing desk’, a pulpit, a shrine for his computer. It got me thinking.

At first I used an upturned crate on my crappy old desk (desk: $30 second hand; crate: maybe $5 new about 20 years ago) to create a standing desk for my desktop magnifier. Problem was, on days when I felt like crap I couldn’t sit down. And the desktop magnifier is awkward to move. And bloody expensive if I have an accident trying to move it on my own-some while the minion is at work.

Besides, I wanted to read sitting on the couch. 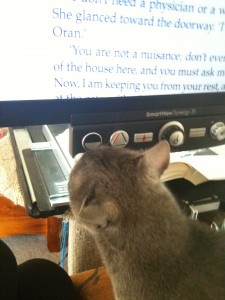 We have two cat scratching posts, one of which — the older, tattier one — only has one platform and is almost the right height.

I pinched it. It’s a bit too tall for the purpose but with a cushion on the couch to give me added height, the cat scratching post serves the purpose until we can get something more suitable.

Smokey was NOT impressed.

She whined. She howled in dismay. She yowled in protest.

Then, eventually, she realised this meant couch snuggles.

Plus it meant brand-new opportunities for annoying me, including walking over the tray, trailing her tail over the book under the camera and pushing buttons to change the settings.

Smokey had a blast being a really shitty kitty. 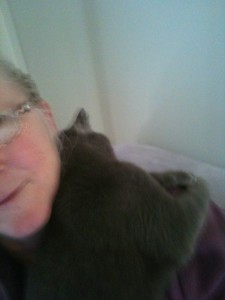 Eventually, after some considerable time, Smokey decided that she’d had enough fun and she — possibly — almost liked this new arrangement, as evidenced by the relaxed snuggle. And that she has actually stood beside the desktop magnifier, looking at me, complaining, asking me to sit the f— down so she can have a snuggle.