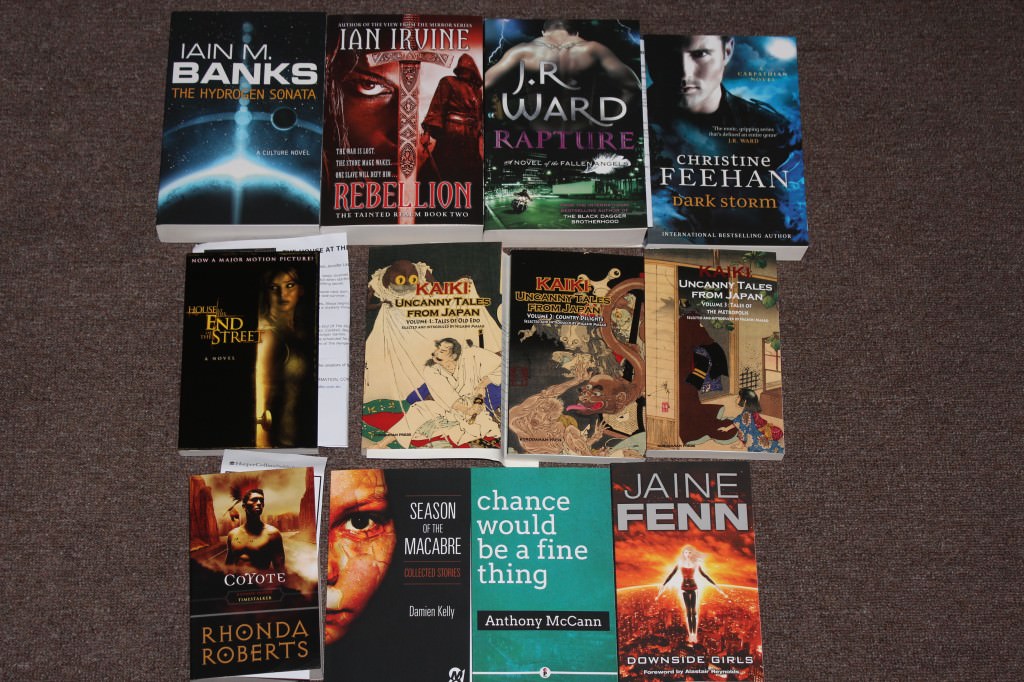 I am extremely miffed.  Today I have been inconvenienced by thunder, lightning and lots of that wet stuff falling from the sky.  When I was a kitten in Adelaide it didn’t rain nearly as much as it does here.  I was extremely traumatised when I flew here – the nightmares! Flying! [shudders]  And then the rain started.  In the past four years it’s barely stopped!  [licks self]  And today, when it finally stopped raining briefly, what should my servant do but go for a walk and come back burdened with parcels?!  Not even any cat treats, just parcels of books!!!

An epic doorstopper science fiction novel (whatever that is), The Hydrogen Sonata is the next Culture novel by Iain M. Banks.  While I’m not entirely sure what the attraction of science fiction is, my servant was definitely excited to put this on that pile of hers that is so tall it started falling over before she spilt – split – it into two or three separate piles.  Although the human hasn’t read all of the Culture series, she’s enjoyed what she has read.  It seems there is broad sweeping background that might benefit from having read the whole series, but it’s possible to jump in and read at least some of them as ‘stand alone’ novels.  I think my servant is hoping someone will send her all the books she’s missed…  I wouldn’t object to spending next winter snuggling on her lap while she reads the entire set from beginning to end.

Rebellion is the second Tainted Realm novel by Ian Irvine.  The first in this trilogy was Vengeance, reviewed by Steve Cameron.  One copy of Vengeance is currently up for grabs in a competition, as long as I don’t do what Tivali, Rhiannon Hart’s cat, did to the cover of Blood Song, mWROwr!

If I, your humble servant, may interject –

hissssssss No, you may not!

But Smokey….  [distracts Smokey briefly with hot, fresh chicken]  This is one time when I like the repackaging of a series.  The new cover images hint of Celtic heritage and the conflicts in ancient times, somewhat reminiscent of the conflict in the Tainted Realm series.  Vengeance is always best served cold, so it’s blue, while rebellion foments in h-

Yes, Smokey?  What did you want to say?  [innocent face]

Mrowving on to the next book.

Fallen Chicken Nuggets – I mean Fallen Angels book 4 – is called Rapture.  On the publisher’s website it says this:

Out of the wickedly inventive imagination of No. 1 New York Times bestselling author J R Ward comes a world where sin and salvation collide in a battle for the future of mankind – where a cynical fallen angel struggles against the seven deadly sins and a demon’s lure over seven chosen souls…

While I prefer the chicken nugget version of creatures with wings, I guess you hoonams need your paranormal romance [sigh]

Dark Storm is book 20 in the Carpathian series by Christine Feehan.  My servant hasn’t read any of this series but this sounds like a paranormal romance crossed with a fantasy with good versus evil as the theme.  Personally, I’m cheering for the vampires; they have the coolest teeth 😛

House at the End of the Street is written by Lily Blake, the same author who wrote the novelization of the movie Snow White and the Huntsman, reviewed here by Evie Kendall.  This is a YA horror thriller that has been made into a movie starring that human from the Hunger Games.  I don’t like being hungry… [pitiful meow]  As this book doesn’t seem to involve cats or people with cat-like teeth, I’m not so interested in this one.  I might allow my servant to give this to Liz Vinton to review.  Maybe.

These books look like they might have something for me to sink my claws into.  All sorts of weird creatures and things to play with…  mmm…..

The publisher says:  Kaiki: uncanny tales from Japan Kaiki series introduces the world of Japanese weird and supernatural literature, Tales of Old Edo presents a selection of outstanding works drawn from centuries of creativity in the field, with an in-depth introduction to the genre by recognized authority Higashi Masao and interpreted by Edward Lipsett.

This cat-friendly cover with colours that remind me of FEWD is of Coyote, a time-travelling detective series by Rhonda Roberts.  The publisher clearly doesn’t understand how to make a novel like this appeal to cats.  Where is the feline with whom I can identify? See this cat-free [sniff] blurb:

A fabulous new TimeStalker novel. A missing diary holding dark secrets, a lost Spanish royal treasure and a serial killer operating in the Wild Wild West… Kannon Dupree, the time travelling detective, is hired to go to New Mexico in 1867 to find the missing diary of a Wild West hero….

I want a time lord to beg me to run away with him!  And to promise me the best, choicest cat food and a never-ending supply of cat-nip!

I’m sure I allowed my servant to mention these books before:

First they showed up in ebook format, now they’ve shown up in paper format, I don’t know… [sigh]  I’m not going to allow her to read them twice, you know!  I am, after all the centre of the universe, I need to be brushed and fed and petted and ….

It’s stopped raining.  I can crawl out of my hiding place and frolic!