Smokey presents Blood of the Zombies 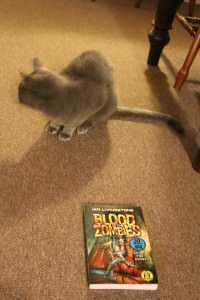 [sniff, sniff] WHAT IS THAT DREADFUL SMELL?!   Urgh  [turns away]  You know I prefer my meat fresh and cooked.   You know I won’t even eat raw chicken or smoked salmon, so why would you present me with some smelly, rotten zombies???

It’s a game for children, you say?  In a book?  You humans have the weirdest idea of fun.  [walks away, head and tail held high]

As Smokey can’t sit still at the thought of rotten meat on the hoof – or foot, as it were – I just thought I’d add that Blood of the Zombies by Ian Livingstone is one of those ‘choose your path’ adventure books that don’t just tell a story but you make choices directing the outcome.  Ian Livingstone is an award-winning creator of games, listed as the 16th most influential person in UK’s digital economy in 2012 by Wired magazine, which may or may not have been influenced by his OBE for services to the computer games industry in 2006.