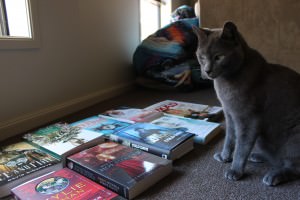 Thursday was hot and horrible but at least the servant stayed at home to operate the air con.  On Friday, however, she DARED to leave me at home ALONE.  In. The. Heat.  No matter how I flopped under the air con vents, no cool refreshing air flowed forth.  We. Are. Not. Amused.

The servant walked to the post office.  It was so humid that, by the the time she arrived at the post office, she was hot and bothered.  THEN she picked up a couple of bricks’ worth of books from the post office and walked the kilometre to the train station.  THEN she carried the books to Writers Victoria where she helped set up their program launch.

Did I ever mention that SHE IS MY SERVANT???  EXCLUSIVELY MINE?!

Anyway.  Where were we?

Oh, yes…  this week’s books, that the servant carted around all afternoon and all evening BAHAHA

Small Shen by Kylie Chan is a part of a multi-media experience.  It’s a dense book, surprisingly heavy for its size, with small, densely spaced print interspersed with comic strips drawn by Queenie Chan.  This book comes with bonus features: a free download of Yunyu’s song Butterflies, as noted in this post last week.

Who cares about words and music and pictures?

Excuse me while I settle into the servant’s lap in front of the keyboard.  It’s easier to supervise her typing here.

Ice and Fire is the fourth in the Chung Kuo series by David Wingrove.

I, the servant, need to butt in here – this is a re-release rewrite and re-envisaging of a series previously published as an 8-book series between 1989 and 1999, now re-written with two prequels, the conclusion re-written as four novels and subsequent books, totalling 20 novels in the new series.  This series is averaging 4 stars on Amazon.  If you’re going to purchase the books, don’t confuse the original series with the re-release as they’re very different.  Ahem – I’m getting the evil eye.

This book looks like it’s set in China.  I’ve heard rumours that cats may be a delicacy in China, instead of more appropriately being treated like delicate cherished lords of one’s household.

The Vorrh by B. Caitling would probably be described as literary dark fantasy.  The Vorrh was given a shout out by the likes of Alan Moore and Niall Alexander but so what?  The picture looks like rabbit food with a trunk like a warped human woman.

THIS BOOK IS NOT FOR CATS!

The Tsunami Countdown by Boyd Morrison is a stand-alone thriller originally published as an ebook, re-released in paper due to its popularity.

Hot Blooded is the second in the Wolf Springs Chronicles trilogy by Nancy Holder and Debbie Viguie.  Random House says:

“…this has all the heat, atmosphere and feudal background of Fallen, and a love triangle to rival Twilight.”

I could not care less about human romance but IT’S RED.  With a FULL MOON.

I’d also accept the fealty of the woman on the cover as my servant.  God knows, she couldn’t be worse than the one I already have, leaving me all alone without air conditioning on a hot, muggy day…

Shadows on the Nile by Kate Furnivall is next up.  Now this book, THIS book I like, unlike that one set in China [mutter, mutter].  THIS book is set in EGYPT.  Where they WORSHIPPED cats.  How apropos!  Admittedly this book is set in 1932 instead of during the height of cat worship, but I’m prepared to be gracious, allowing this incorrect time setting to pass.  Just this once.

The Nile seems to run red with blood on the cover as well.  Bonus.  Hmm, yes, I’m inclined to think this book is cat friendly.

Cold Days by Jim Butcher is the next in the Dresden Files series about a wizard living in modern day Chicago battling supernatural forces of evil and helping the good guys.  I could not care less about THAT, but Harry Dresden has an AWESOME CAT.

AND he got rid of that dog, so it’s EVEN BETTER.

On the down side I don’t like the cold, but at least Harry’s not a ghost any more.

A terrifying psychological thriller – perfect for fans of Black Swan.

Who do you trust when you can no longer trust your own mind?

Emma’s life has always been a struggle and now she’s been accepted at a prestigious music school, she is determined to excel. But when the impossibly chic twins, confident Sophie and quieter Matilde, come crashing into her life – surrounding her with champagne and parties – they demand Emma’s full attention.

Then shy Matilde commits suicide and shockingly, her identical twin Sophie flourishes. Now odd things are happening to Emma: blackouts, waking up in strange places, bizarre dreams. Something, or someone, is consuming Emma’s mind. Terrified, Emma begins to doubt everything and everyone around her, especially the beautiful Sophie…

Let’s cut to the chase here.  If you can’t trust your own mind, TRUST YOUR CAT.  Simple.  If you don’t have a cat, a quick trip to the rescue shelter for cats WILL fix that.

Which brings us to the final book of the day: if you’re not a cat person or if you don’t have at least one cat in your life to serve loyally and faithfully like all good humans should, then you are

[snigger] Fancy carrying that around all day on a hot day? [snort]  JUSTICE WAS SERVED.

This is a pop-culture fest celebrating 60 years of MAD Magazine with iconic spoofs like this one. 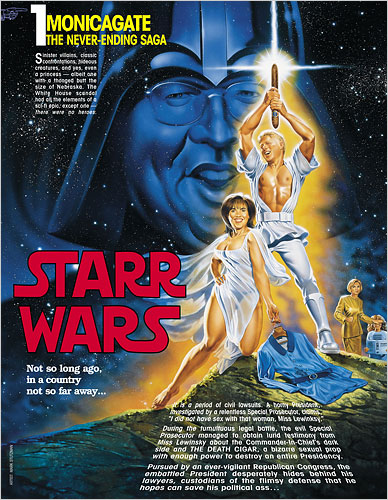 Not much for cats here…

Until next time, may your lives be nine and filled with furry friends.