Emerson is an OCD woman in her twenties running a bookstore and elected as a town councillor. Her family abandoned her years ago and don’t even check in. But her school friends are her “family by choice”, surrounding her with love and support. Then one day something weird happens, blood is spilt. And after she comes in contact with the blood of her longtime crush, she acquires magic. Big Magic. I guess that’s why the book is called Small Town Big Magic.

And her longtime crush apparently crushes back.

The weirdness that isn’t magic

Emerson’s home town is St Cyprian, which is a weird choice of name for a town started by Salem witch trial survivors back in the day. It’s at the confluence of a few rivers, a magical location. What I found unbelievable, however, is that a town dominated by witches would elect an apparently nonmagical person to the council.

And that a girl who trained all her life to be a witch would be found inadequate… only for her crush’s blood to [ta daaa!] reveal that she’s actually an uber uber witch.

There’s a lot of “because plot” happening.

Once Emerson’s magic flows, everything becomes super easy. Even contradictory. Like, these witches don’t eat magical food because real food is better for them, tastes better and nourishes bodies better. Except when they do eat magical food because it’s easy. And they don’t use magic to open and close doors because it’s quicker and easier to open and close doors manually. Except when it isn’t.

Her friends’ betrayal and decade of lies is all ok because it was necessary apparently. But also it turns out that Emerson’s longtime crush about which she’s never done anything was actually her high school boyfriend. The mind wipe didn’t just wipe magic from her mind, it wiped her romance too. But not her relationship with her friends. Go figure.

Her family disappeared, leaving her with abandonment issues, but her friends were happy to stay close while constantly lying and living a lie. Wouldn’t it have been easier for them to “naturally” distance themselves from her after school (and the mind wipe)?

Small Town Big Magic reads like fun fan fic more than a carefully crafted professional spec fic saga’s beginning. Which is fine: we need escapist fun, especially right now. However, it’s important to check expectations at the opening of the cover, to be prepared for a few contradictions, and just to think of this as stereotypical chick lit or a beach read.

If you want more fun fantasy, try Patricia Briggs. Evie Kendal reviewed one of her books here. I admit to binging and not reviewing a lot of her series back in 2016. My justification: if I pays I don’t have to review! But I enjoyed the series. 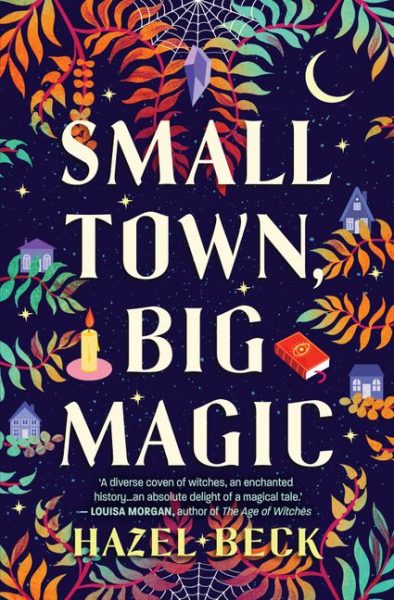