A commentary with spoilers and puns by Edward and Nalini Haynes

A woman, Lena Gilbert (Erin Cahill) rocks up to a house with dead vines hanging from the gutters. Her driver, Sam (Anthony K Hyatt), tells her not to go inside but she rushes in anyway. Sam says it looks haunted.

A raven caws a warning.

Lena cuts her hand on a vine INSIDE then the vines trap her.

Ichabod (Tom Mison) and Abbie (Nicole Beharie) talk about Thanksgiving only for Abbie to talk about current traditions leading to Ichy ranting about what actually happened as opposed to the myths. Ichy is angry and mourning his losses.

Minion says, “Talking turkey leaves him all gobbled up inside.”

Irving (Orlando Jones) assigns Abbie and Ichy to find Ms Gilbert. Apparently you’re not supposed to lose billionaires. Ichy is nonplussed and a bit pissed that one woman owns a billion dollars, the gross national product of the entire 13 states over his lifetime.

Abbie searches the “inner net” because no one has corrected Ichy yet. It must be a running joke in the writers’ room.

Minion crows when he spots the black bird outside the mansion.

Ichy and Katrina visit the mansion in the past. A servant takes Katrina’s coat outside the house.

Ichy and Abbie walk inside.

They find Sam, dead (black dude dies nobly while white people live on trope), looking like he experienced an animal attack. There are bloody lines on the floor that imply Ms Gilbert may have been dragged away.

When Abbie tries to walk outside to get a signal on her radio, the house locks up tight, doors slamming.

Abbie announces they’re in a haunted house. No, really?!

After the intro, the minion says it’s now 3 birds.

Abbie sees a black woman walk away and follows her. Abbie fluctuates between being trying to be constructive and freaking out.

Ichy finds Gulliver’s Travels with a letter that he wrote to his wife.

And there’s a bird inside. I jumped. Minion sniggered. I’m seriously considering arming myself with a cushion. -_-

Ichy finds antique glass goblets in impeccable if slightly dusty condition. He decides the house may have been a sanctuary from the supernatural as well as from slavery (on what evidence exactly?), which may explain the current haunting.

Crane says, “After you.”

They find Ms Gilbert behind a door, trapped by vines.

Outside a vine creature comes to life.

Minion says, “It’s like something out of Dr Who.”

They get her out of the closet rather easily.

Jenny returns a gun to Irving who accuses her of stealing. I’m not sure if they’re supposed to be bantering or falling in love or just wasting time. Is supposed to be sexual tension? It’s as tense as a wet paper bag.

Irving meets a woman with a child in a wheelchair. They seem connected but not intimate.

There’s a lot of talking… They make deductions based on fuck-all that claiming “research”.

Instead of an abandoned old house, now there’s plastic hanging on the walls.

Now they’re inside the walls — Why? How is the space between walls so big? They follow each other’s voices. This won’t end well.

The creature that emerges from the wall isn’t Abbie, it’s the vine man. Minion says, “It’s Steven Moffat.” A pause then “There are more than 3 birds now.”

Abbie is lost. Some sanctuary.

Wheelie girl races through the corridor and gives Jenny a hard time. She accuses Jenny of dating her father so they have to meet. Jenny says she’s not dating her dad. So I guess Irving and Jenny are supposed to be flirting but there’s absolutely ZERO sexual tension. It’s just not working.

The kid is cool though.

Irving’s ex tears strips off him for being a bad dad and not spending time with their kid.

She threatens to file for sole custody — which would change things exactly how if Irving is an absent father?

She leads Abbie into a room where Katrina is giving birth. Ravens peck and fly at the window. The baby is born. It’s a boy. Abbie is stunned then she tries to find her way back.

Ichy is busy talking at Abbie and not listening. Eventually she gets through to him. He’s hard work!

The birds break the window. Something comes after the baby. The vine man is Groot who takes the baby. Lachlan protects them from Moloch’s demon Groot. Groot kills Lachlan.

Ichy wants to know what happened to the baby. Gilbert screams. Now it’s dark and we’re coping with torchlight BUT WHERE DID THE TORCHES COME FROM?

Abbie sees more from the past, Katrina and the baby fleeing with the black woman.

Ichy does a Jack and the Beanstalk on Groot.

Minion says, “Everything’s a bit wooden in this episode.”

Crane has a flare, hany for casting red light on a horror scene. He chops defenseless roots while out of Groot’s arms’ reach.

Ichy emerges covered in blood and says, “I should like to go home now.”

Minion says, “Here come the birds. There have to be a lot of birds or it’s not evil.” Hitchcock would be proud of Sleepy Hollow.

Ichy and Abbie go back to the bat cave. Abbie temps him with Jenny’s terrible cooking and rum then they have a maudlin Thanksgiving conversation so they can bond then go eat.

Lena Gilbert sends Abbie a parcel of papers. They learn Abbie’s ancestor was the black woman who brought Crane’s son into the world.

They celebrate with wine in mugs.

Minion says, “That was no Cabin in the Woods, but there was a lot of blood.”

Jenny is supposed to have all these skills but she never crosses paths with Abbie, doesn’t add anything to the story except to “flirt” with Irving.

“And yet the storytelling and production is better than Moffat. If you took the team working on Sleepy Hollow and replaced the likes of Moffat, you’d get a better Doctor Who,” says the man who hasn’t watched an episode of Doctor Who in a couple of years because STEVEN MOFFAT. 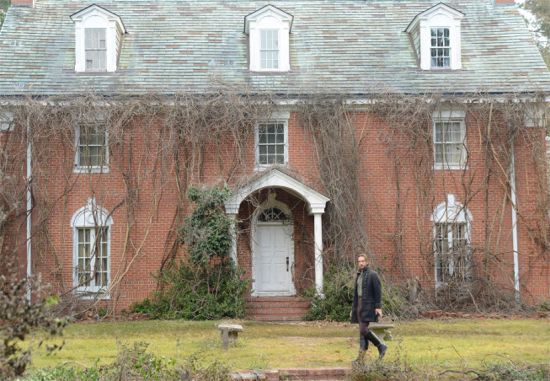