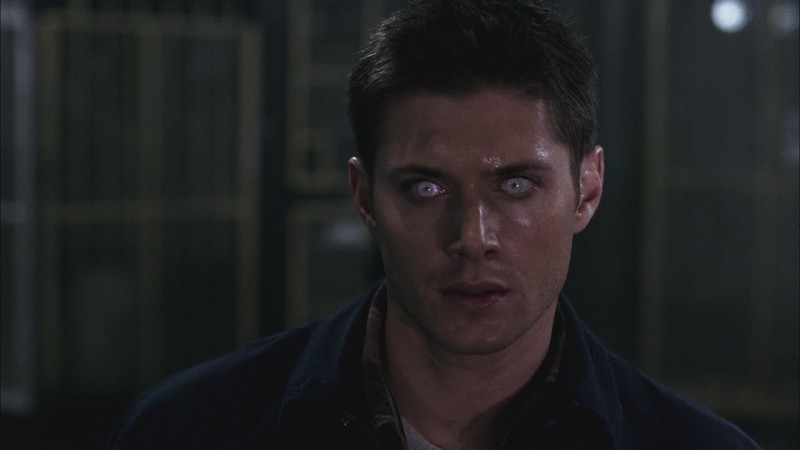 ‘Skin’ is a story about a shapeshifter. I am so surprised.

A pretty girl called Becky emails Sam asking for help: her brother has been arrested for the murder of his girlfriend. Sam jumps on the chance to help her. Because, y’know, pretty girl. And chance of jumping on her.

The Impala (Dean’s car) rumbles down the street.

N: That car is a beast. If I saw that in real life, I’d despise the person driving but in this it’s great.

CJ: It’s like ‘Yeah, Sam and Dean Winchester!’ But you gas-guzzling people get out and don’t drive through my street IRL.

Sam tells Becky Dean is an off-duty cop so she takes them to the crime scene.

CJ: There’s no way police would leave a crime scene unattended like that.

Another attack on a woman by a man she trusts. A doppelganger enters the house.

R: ALL THE CHEESY SFX.

Guess who the “real” person is. Also, guess what happens next.

N: He gets hit with a baseball bat.

Yes, he gets hit with a baseball bat. I actually said it first though. Just sayin’.

R: He has a lump on his head but there’d be a lot more damage.

Sam and Dean descend into the sewers to search for the skinwalker and the weapon.

CJ: And where is the baseball bat? I’ve never been in a sewer but in TV and movies they all seem remarkably clean.

The way to kill the skinwalker is a “silver bullet to the heart”.

CJ: Why is that the way to kill all the things?

Becky realizes Dean isn’t on duty as a cop so she turns on the brothers.

N: She knew that before she took them in, that he was “off duty”.

CJ: And he wasn’t invited in by the local police.

Sam and Dean set off to hunt the skinwalker. Again.

CJ: His weapon is shoved down his butt-crack. That can’t be safe.

N: I thought men preferred to keep their weapons in the front. “Is that a gun in your pocket or are you just glad to see me?”

CJ: Either way, it’s not going to be pretty if it accidentally fires.

CJ: Throbbing for an entirely different reason. Sex aside, that would have to hinder going to the bathroom.

People just walk past while three men crawl out of the sewer.

CJ: How did the gun get from his butt-crack to his boob?

R: He’s just walking along with it. Surely it makes more sense to keep it hidden?

After the brothers separated, the skinwalker joins Sam wearing Dean’s face. Although Sam was suspicious of skinwalker-Dean, Sam is down and taken prisoner.

Skinwalker-Dean ties Sam up in a basement.

R: There are lots of convenient basementy-type places.

CJ: That’s why he’s murdering people? If he’s lonely, why?

R: Or why not murder the husband and stay?

A swat team breaks into Becky’s house to rescue her from Skinwalker-Dean. The swat team are all storm troopers.

N: HOW DID THEY MISS??? They’ve even got laser pointers.

R: You just jinxed it. It’s convenient that he found his way to the exact area of the sewers that the demon went, though.

N: That makes twice that she was tortured.

R: Are there two demons?

CJ: Why don’t you just pick up the knife instead of —

R: We were taught knife techniques at karate and that’s not one.

R: I would have thought he’d melt.

The not-melting-dead-thing is convenient because now police won’t be looking for a live Dean after he was accused of torturing Becky.

Sam and Dean drive off into the not-sunset. Seriously, when do I get my Impala-into-the-sunset scene?

CJ: That’s the worst green screen scene, with the blue around his face.

R: That’s like on Big Bang Theory, they do the same thing and the same scrappy scrolling background.