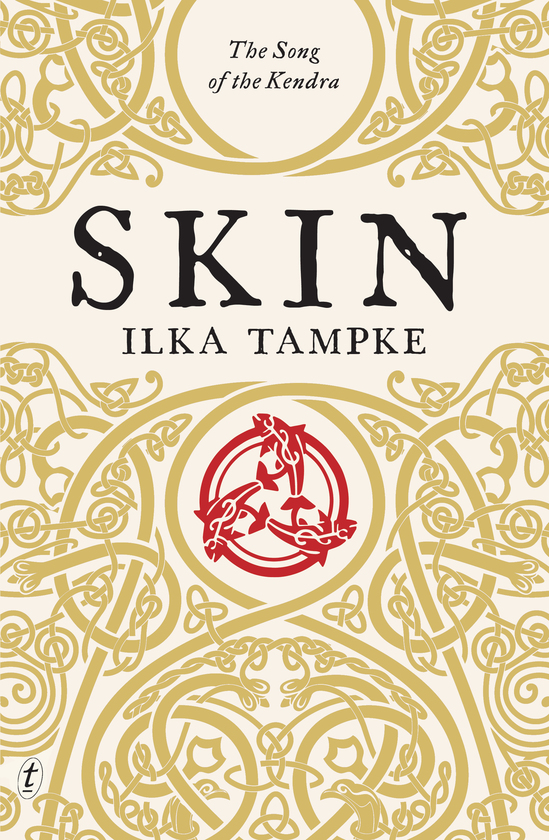 Warning: some spoilers. I’ve tried to keep these to a minimum.

Skin is a YA dystopian fantasy in a historical setting filled with teenage angst written by an ‘unreliable narrator’.

It is 43 CE in Albion (Britain) and the locals feel threatened by an imminent Roman invasion ordered by Emperor Claudius.

Ailia, aged 14, is obsessed with her position in her community. She’s skinless (she doesn’t have a totem), which makes her inferior to everyone with skin. All the other skinless people live on the outskirts of the community in poverty, drinking their days away or selling their bodies for sex to make ends meet. However, Ailia is special. Cookmother raised her in the kitchen to serve. Ailia has learnt the healing craft and she’s handmaiden to the Tribequeen. I’m not quite sure how one teenager manages three diverse jobs but Ailia is special.

On the day of the Beltane festival Ailia catches Ruther’s eye. Ruther is a young man of the tribe who was fostered out. During his time away he’s become enamored with Rome, now advocating that the tribe submit to their new Roman overlords.

It’s Ailia’s first Beltane after her menstruation cycle started so she joins the festivities, coupling enthusiastically with Ruther. Ruther condescends to offer Ailia to join his household as servant; she’s skinless so she can’t marry him. Later he ups the ante to offer her a position as consort until he marries someone else and even to continue as consort after he’s married. Ruther’s persistence and arrogance, his inability to accept ‘no’ as an answer, make him an unsympathetic character and yet I didn’t care about Ruther; I was more frustrated with Ailia for not slapping him down.

I admired Ailia’s enjoyment of sex while retaining her independence during Act 1. Pity she didn’t stay the course.

A fish says hello to Ailia. Later we learn this is A Sign.

Ailia takes medicine to an ailing man but gets sidetracked by Taliesin, a cute guy. The next day she pretends to make a poultice for the sick man to manipulate the Cookmother into giving medicinal advice. Later we learn Ailia didn’t bother to take the original medicine nor any other medicine to the sick man. He dies. Ailia is one of THOSE teenage characters.

After her first meeting with the cute guy Ailia is confronted by Heka, a filthy starving woman. Ailia claims she has no power to help Heka. Ailia’s narrative has previously run in the vein that her position hangs on a thread. She now shifts to being powerful and able to help but choosing to lie instead. She won’t even give Heka food, drink, medicine or a bar of soap to wash in the river, all of which were probably within her power to give without consulting Cookmother or the Tribequeen.

Heka. Hecate? I KNOW this is not going to end well. Even if Heka isn’t a supernatural being, There Will Be Consequences.

Spoilers get more spoilery. If you’re going to read Skin, stop here or skip to the conclusion.

Taliesin disappears and reappears as a salmon.

And has sex with her while in fish form.

After the human-form Taliesin turns Ailia down, he’s in the shape of a salmon like a salmon you might eat and he nibbles on her nipples before swimming up her vagina to bring her to orgasm.

Apparently Ailia can’t access the supernatural world of women unless she passes through the doorway made by a man.

Foreshadowing and duality emphasise the self-conscious Literary nature of this novel so I suspect some of the plot-holes are “because SYMBOLISM”. However, “because SYMBOLISM” belongs right up there with “because PLOT” as justification for puppet-mastery and inconsistent characters. Both transgressions belong equally in the catalogue of Deadly Writers’ Sins. It is possible to write a novel with deep symbolism that enhances without detracting from the story arc; Pure by Julianna Baggott is an excellent example of Literary science fiction for that reason. Her mothers fused with their children were jaw-dropping in the horror, poignancy and social comment.

Quotation marks were most noticeable when misplaced or missing; the same can be said for the second l in “will”. Overall the quality of proofreading wasn’t too bad — I’ve definitely seen worse — but it was a bit distracting.

Conclusion (the bit past the spoilers)

Skin belongs to the oeuvre of Mists of Avalon by Marion Zimmer-Bradley and the Crystal Cave series by Mary Stewart with more than a dash of Epona. (I expected Ailia to be averse to turning widdershins ANY moment). However, teenage angst and self-obsession overshadows the political intrigue and impending doom narrative in Skin, placing Skin in the Young Adult or New Adult category. The prose is somewhat stilted like a blend of King James Bible English (without the thee’s, thine’s and thou’s), mid-twentieth-century fantasy prose and contemporary fantasy prose. Most like the TV series The Originals in flavor, Skin fans will include Literary readers attracted by existential teen angst and readers who enjoy melodrama and soapy-style fantasy.