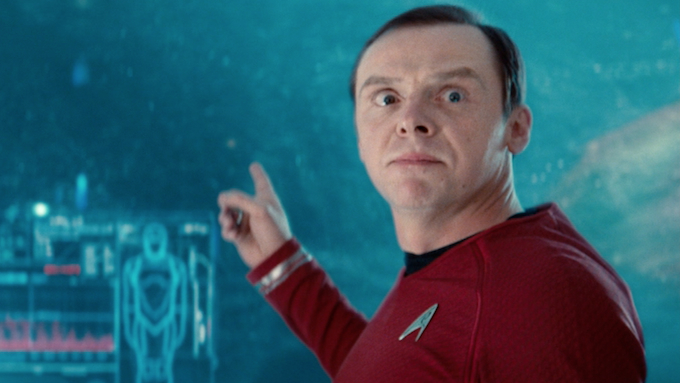 Simon Pegg, that renowned geek who brought us intellectually stimulating movies like Shaun of the Dead, Hot Fuzz and The World’s End, is worried that science fiction is dumbing down society. Apparently it’s the fault of science fiction and fantasy as a genre and the fans. It’s got nothing to do with Hollywood playing it safe and presenting pretty ‘splodey movies to placate the masses like Roman emperors throwing bread at the circus.

Interstellar not only presented some classic SF tropes but the making of the movie helped advance real-world science because the creators put some serious computing power into generating black holes for the movie. But science fiction and fantasy is dumbing down society.

The Almighty Johnsons is a TV series developed specifically to explore men’s issues and it’s a comedy/drama about Norse gods who have devolved into more ordinary people. But science fiction and fantasy is dumbing down society.

Starship Troopers was very splodey and even had naked boobies for those that way inclined but also took a hard look at society, including parental control of adult children and advertising. But science fiction and fantasy is dumbing down society.

Sometimes (I) feel like I miss grown-up things. And I honestly thought the other day that I’m gonna retire from geekdom.

I’ve become the poster child for that generation, and it’s not necessarily something I particularly want to be. I’d quite like to go off and do some serious acting.

I would have preferred some serious acting to your portrayal of an evil albino-type in Doctor Who. But I understand you have to pay the bills and staying in the limelight brings more work, thus paying more bills.

Meanwhile, Pegg somewhat worryingly says that he was hired to rewrite the next Star Trek script because the earlier version was “a little bit too Star Trek-y.” And in order to reach a much broader audience than Star Trek Into Darkness, his solution is to “make a Western or a thriller or a heist movie, then populate that with Star Trek characters so it’s more inclusive to an audience that might be a little bit reticent.”

Simon, lad, it’s been done before. Remember Firefly and Serenity? Joss Whedon crossed the western and science fiction genres to make a successful TV series (axed by Fox) and a blockbuster movie. Serenity even looked at governmental control of people with “unforeseen” affects. But you’re going to be all original-like and make us a shiny new Star Trek movie.

I have no problems with a Star Trek western. I loved “A fistful of Datas” and the other western/Star Trek crossovers and I’m sure I’ll like your movie too. But don’t blame the genre for Hollywood’s obsession with “safe” movies catering to the lowest common denominator.

If you miss grown-up things, perhaps you should try a stint behaving like an adult. Read a book, perhaps? And don’t piss on the fans.

Simon Pegg’s post titled Big Mouth Strikes Again (surely it should have been Big Mouth Strikes Back?) claims that he’s acquired other people’s opinions as his own because he’s bored with his opinions AND that he’s concerned about the dumbing down of the genre for, like, intelligent sociological reasons.