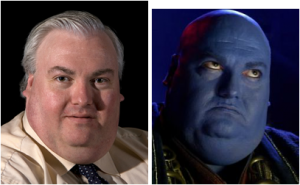 I stood in my living room, wrapped in a towel with water dripping from my hair. I had just stepped out of the shower and bolted for the phone when it rang, just in case. “Is now a good time?” Yes, yes it is. Simon Fisher-Becker had followed up on my somewhat rambled invitation for an interview.

Less than two hours later I was in his hotel lobby, wondering how on earth this was going to work. While I have a background in writing this would be my first interview. And it was with one of the most entertaining actors that Doctor Who has seen since the 2005 reboot. My nerves were soon put to rest – until I began to write this article that is.

The blue man in the box travelled with the madman in the blue box. Dorium Maldovar is the latest in a line of rogues to cross the Doctor’s path. Jack Harkness and Sabalom Glitz come to mind. Both were [somewhat] reformed by the Doctor while Dorium lost his head, rather literally. Fortunately for the fans Dorium survives without his body and thus may return to the series. To clarify that statement let me borrow from Sergeant Schultz; I know nothing! You’ve heard Willy Wonka sing of pure imagination? This is pure speculation. “Whether Dorium is coming back I have no idea. What I do know is the fans want him and I’m very happy with the idea people want that even if it doesn’t happen.” Simon Fisher-Becker is as in the dark as the rest of us.

The interview came about as a result of the convention Armageddon [Melbourne 2013]. Simon was attending with a panel of Doctor Who actors, as well as a zillion other big names. I had made a last minute decision to go; I will be starting my PhD soon [because I am mad] and it would be good research. Ah the excuses one finds to pay convention prices.

We spoke about the quality of scripts that Doctor Who writers provide, Simon elaborated; “each episode I’ve been given there is a fascinating element of Dorium”. We also spoke of lesser quality productions and the choice of accepting the role “at the end of the day it’s what was offered and it paid the mortgage”.

Simon was kind enough to explain the two main types of conventions from a guest star point of view. Either provide your own photos and set your own prices and hope to at least break even, or be paid a set fee and have the convention set the price. The average price in Australia as of 2013 for the big conventions are $30 for autograph, $40 for photo. Simon’s first experience of a convention in Australia [Armageddon] was a positive one; “What I didn’t expect was the laid back friendliness of everybody because in America they’re a little more intense.” Hopefully this means he’ll be come back again soon!

The more famous the guest at a convention is the higher price you pay. Don’t get me wrong, I am not trying to imply the convention organisers are trying to rip us off – they have to pay for venue, advertising, getting the actors there and more. But, with a bigger budget there are more guests and a more comprehensive convention. The downside to the big conventions is the lack of time with the guests. Thirty seconds to get an autograph or photo then move along because there’s another hundred people behind you waiting. “I personally find it very uncomfortable. I appreciate the fans fork out a lot of money, far more than I would! And not only that, but a lot of them that come to the conventions have travelled from the other side of the world … So the least you can do is give them a few minutes.”

The panels tend to be a mixture of anecdotes and questions; the interaction between guest and audience is often well balanced but there are occasions where time runs out before all questions are asked. This isn’t always the guest star’s choice; “There are some conventions that organize guest meetings where there’s a table and about ten or twenty people get to chat, but then there are the big, big conventions that are a bit like a conveyor belt. I go to the conventions if I’m invited but I don’t approach them and ask. I prefer the small intimate ones.”

At most conventions you tend to run into three different types of fans: people attending for the first time and are unsure what to expect; people who turn up to all the cons and know all the tricks; and cosplayers. Generally fans who dress in costume are a little more into a show than the average viewer. I asked Simon how he felt about people who go to the effort of cosplaying; “This year (2013) I’ve met three [cosplayers dressed as Dorium]. A young chap, only about 8 or 9 … the second one was at Salt Lake City, and then here at Armageddon in complete outfit, absolutely fantastic.”

We discussed Matt Smith’s portrayal as the Doctor and Simon said he had “elements of Patrick Troughton about him”, which I agree with wholeheartedly. I explained my theory [before Capaldi was announced] that the Doctor would become progressively younger until we had a five year old running about in the TARDIS. Simon had a similar theory “Doctor Who: The Embryo“. Like many of us, while sad Matt Smith would be leaving he was happy with the announcement; “I’m very pleased it’s Peter Capaldi … and I’m also very pleased it’s gone back to an older, but I didn’t dislike the younger”.  As fun as Eccleston, Tennant and Smith have been I look forward to an older Doctor.

Simon is aware of just how popular Dorium is with the fans; “As for Dorium I know he’s got a huge fan base, for which I’m overwhelmed, really. I’m very lucky, I was a fan of the show, I watched it since William Hartnell and I always wanted to play the Master… but I’ve got the next best thing, I’ve got Dorium.” As a fan of both Dorium and the Master I must say – there can be many regenerations of the Master; there can be only one Dorium. After Dorium’s appearance there was an explosion on social media. The fans loved him. “I think ultimately the producer decides whether a character returns, ultimately, but they do listen to the fans, I’m sure.” Fortunately the cast and crew agreed with the fans; “Having spoken to Steven Moffat he has told me he wasn’t sure what he was going to do with Dorium if at all, but Toby Haynes, director of The Pandorica Opens, he was the first to say to Steven that we have to bring Simon back.”

One huge difference between Classic and New Doctor Who is the romance. Is Doctor Who too sexy now? Carol Ann Ford stated that when she was approached for the 20th anniversary they asked she not refer to the Doctor as Grandfather as they didn’t want the audience to view him as having had sex. Jon Pertwee, the lovely Third Doctor [you’d never guess who my favourite Doctor is], went on record that he thought the Doctor was asexual, that he cared for his companions but was not in love with them. Simon’s reaction was one that much of the fandom felt; “I won’t say I was uncomfortable but I was a bit annoyed to be honest, initially, then I found it was actually quite a hoot.”

So what does this all mean for Doctor Who and the fans? The Doctor is changing with the times. If he didn’t evolve we would be stuck in the 70s with Jo Grant being told to stay out of the way and let the men do the real work. Jo never listened but that sentiment these days would lead to outrage and boycotts. While I am no fan of the romance [get on with saving the world or blowing it up, please] it seems in this era it is a necessary subplot to keep a wide variety of audiences interested.

These days political correctness has become something or other that gets in the way and everyone watches what they say in case they offend. In the classic series they were quite blatant with references to current events: The Happiness Patrol screamed Margaret Thatcher but in the new series current events and topics are incorporated in a much more subtle way. Simon agreed, “I don’t think they’re so obviously political”.

While  current events may be in the background and the first lesbian couple involves a Silurian there is one thing all the characters have in common: they are all beautiful. Simon is certainly a handsome man but he is also a larger one. Despite how far we have come as a society there are still stereotypes. “In the script it said ‘Dorium: large blue man, think Sydney Greenstreet’. As an actor my soap box is that I do get a little tired of the only time I’m considered for anything is if f-a-t  is written in front of the character reference but I’ve got used to it, really … I know I’m not going to be Romeo so I have fun playing other characters.” We certainly have fun watching Dorium in action.

There are some shows that you simply do not watch and then not think about until the next episode. I have found Doctor Who fans especially to be way. We might wear a shirt, a badge, the fourth Doctor’s scarf… something to communicate our enjoyment of the program and let other fans know we’re there.  Whether we express this connection through something simple like talking to a friend about an episode, going to conventions, cosplaying, tweeting, or wanting to write a PhD on it, we are all connected by our love of a madman in a blue box. Some would call us crazy and maybe we are. I believe Simon expressed it best; “If you find anyone who falls under ‘normal’ they’re probably the odd one. We’re all a bit quirky in some sort of way.”

Kathryn is doing a Doctorate in Doctor Who!!! She’s a candidate for a PhD at RMIT – titled “Sex, Aliens & Cosplay: Otherness and the Fan Connection in Doctor Who“.

Simon is currently touring his one-man show ‘My Dalek Has A Puncture’, appearing in a Murder Mystery event in July and more.