Simon Cleary contributed to the Authors For Fireys fundraiser in January 2020. This mammoth undertaking was organised by Emily Gale and Nova Wheetman. They raised $513,149 to support firefighters and to help Australia’s bushfire survivors.

During the Authors For Fireys fundraiser, Simon introduced himself and his book to us like this:

I’m auctioning my third novel THE WAR ARTIST, a tale about trauma and sacrifice and overcoming challenges. Mostly it’s about love. You can’t have enough love, enough generosity. At the extremities of things you often find their essence. The fireys who’ve been busting guts for days and weeks and months now have been so generous, so selfless, and have so often worked through exhaustion to protect communities. Like so many of us, I have family members and friends who’ve lost homes, or had them threatened, who’ve tasted ash and who are incredibly grateful to the fireys who’ve been looking out for them. For me this auction is simply about saying thanks, and being part of a community that says thanks.

Obviously the fundraiser is over but Simon’s book is still available!

I am a novice card maker but I made the pictured card. This is a thank you to Simon Cleary for appearing as a guest on Dark Matter Zine and for supporting Australia’s firefighters. Here is a thank you card for Simon that seemed slightly relevant to his novel. An ‘artistic’ dog! Who’s (not) a good boy then? 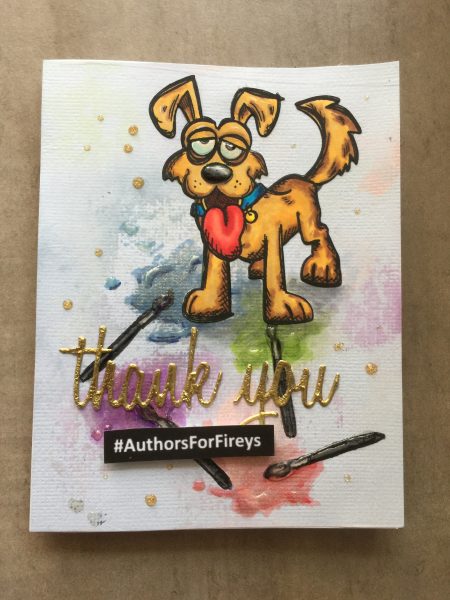 I watch Kelly Latevola’s YouTube channel where she demonstrates how to make cards. Kelly made this. 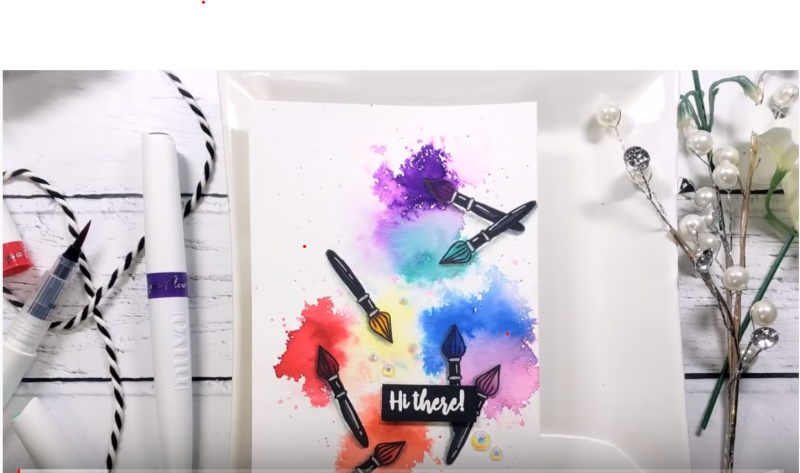 I was inspired. I’m a novice and I’m still building up my stock of crafting tools so I didn’t have the colors I needed or the stamps or… You get the idea. I did, however, have a much smaller stamp of a brush, which I used. I tried using the inks I have but they are duller plus using colored cardstock actually made the image duller not brighter. My bad. (I also put some new, brighter, inks in a shopping cart… Watch this space.)

Also I wanted to give the paint splatters a culprit. I’d already stamped, copic colored and die cut the dog, which seemed to fit nicely.

Don’t use colored cardstock if you want your colors to pop. Also get brighter inks for the splashes of color. The brushes were a little small but I think they worked, especially with the dog. In hindsight I think I’d stamp the dog on the page and let colors from the puddles of paint bleed into the dog because PAINT DISASTER.

I think this was the second card where I die cut the ‘thank you’ and tried heat embossing it to be pretty. Never again. Too messy, too wasteful, too hard, too many attempts to get a mediocre outcome. Various cardstock can replace this option: metallic cardstock, colored cardstock, glitter cardstock…

Because I’d bought ‘glossy accents’ and Nuvo drops without thinking about WHAT THEY’RE MADE OF (I think they’re plastic, sigh) I’m going to use them until they’re gone then I’m not going to buy any more. So I used the glossy accents on the paintbrushes BEFORE gluing the sentiment down so the ‘thank you’ is all lumpy. And I used Nuvo gold drops around to fill in some empty spaces. I’m TERRIBLE at positioning embellishments; I go in with the best of intentions then end up with a card that looks messy or overly busy. Once I’m ‘plastic free’ (or at least significantly reduced), I’ll use paint or copic markers to draw in spots of color instead of adding plastic to cards. See, I’ve been pondering the problem!

Still, every novice has to start somewhere. I’m practicing having a hobby, getting back into art & craft, and trying to get Mum’s voice out of my head. (She keeps telling me cards are useless, a waste of money and putting them down for not being real art. Her imaginary voice in my head is way too realistic.) I’m enjoying the challenge and the change of pace.

Cheers and stay safe. Until next time.