Apparently the new SimCity game was released only to tank, big time, because EA are greedy bastards who failed to provide enough servers and who plan to charge $470 to purchase the whole game, sold in installments, although still not as good as previous Sim games.  Birmo bitched about it and quoted Malor’s one star review.  Basically they’re saying that there aren’t enough servers for demand, the always-online model doesn’t work for this game, you can’t mod the game (modifying the game was one of the highlights) and more.  Malor said:

Fundamentally, SimCity has always been a ‘software toy’. That means that there’s no real end state, no way to win. It’s just a thing that you play and experiment with. You build, and tinker, and mess around. It’s a toy, not a game; it’s a sandbox, not baseball.

So, in this iteration of the game, you don’t even get to buy your toy. Rather, you rent a toy from EA, who lets you play with it only in very limited, circumscribed ways, only on their servers. So you have to have a live Internet connection at all times, and their servers have to be up, and have to have space for you. And the rules for play are draconian. If you want to, say, build a city, save it, blow it up with something terrible, and then restore from save, you can’t do that anymore. That’s an unauthorized usage of their toy. And if you figure out ways of using their toy that they don’t like, they’ll ban you forever.

All third-party modding is shut out. One of the best parts of SimCity 4 and The Sims is that users can create and share content among themselves for free. You will no longer be able to do this. You will be required to run only Official Authorized Content.

Further, you’re not getting the whole game for your $60 or $80, depending on what version you’re buying. EA’s plan is to sell you Simcity 5 over and over and over. They’ve directly admitted that they already have it running with larger cities, but they’re not releasing that now. They claim it’s because it “won’t run on Dad’s PC”, but the real reason is so they can sell it to you again later. Want subways? That’s gonna be $20. Want railroads? Another $20. Bigger cities? Oh, that’s in the $30 expansion.

Right now, if you look at The Sims 3, the game costs $30. But if also you buy all the DLC for it, it’s *four hundred and seventy dollars*. This is what they are doing with SimCity 5; locking you into their server infrastructure, and then exploiting the heck out of your wallet.

This is a lousy deal, and you would be stupid to take it. Always-on DRM, and a deliberately crippled game, so that they can slowly uncripple it, charging you for every restored feature from prior versions.

Simcity 4 still works pretty well. It’s not quite as nice as most current games, and can require you to ‘pin’ the process to just one processor on a multi-core system (ie, most current machines), but if you want a city builder where you won’t have to pay extra to breathe both in AND out, that would be a better option.

But buying this game? In my opinion, you would be wiser to take three twenties out of your wallet, and light them on fire.

According to News.com.au, EA Games said it was “aggressively undergoing maintenance on the SimCity servers and adding capacity to meet demand”.  So they authorised the sale of enough games to overload their servers and AFTER the backlash they started to get off their backsides and do something about it?  Great business acumen there!  Three cheers for the EA bean counters!

Remember Error 37?  That was the error code for full servers booting players off Diablo III AT THE LOG IN SCREEN that caused so much Net Rage in May 2012. 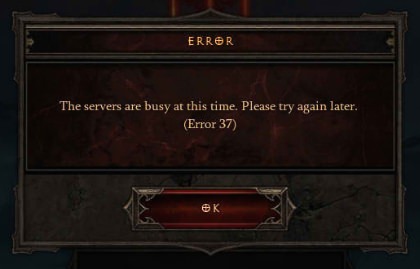 Error 37
We’re aware that some players are experiencing Error 37 when attempting to log in to Diablo III. This error indicates that the Diablo III server is full and is likely the result of high login traffic. If you receive this error message, please wait and try again.

Man, Diablo III is super hard. I've been playing for 30 minutes and haven't even defeated the login screen. #error37

I was torn between bemusement and annoyance while watching this debacle unfold.  Bemusement because some of it was funny and I wasn’t affected.  Annoyance because it was yet another fail by Blizzard ripping people off.  In my opinion, selling games without the capacity to service those games properly from point of sale is ripping people off.