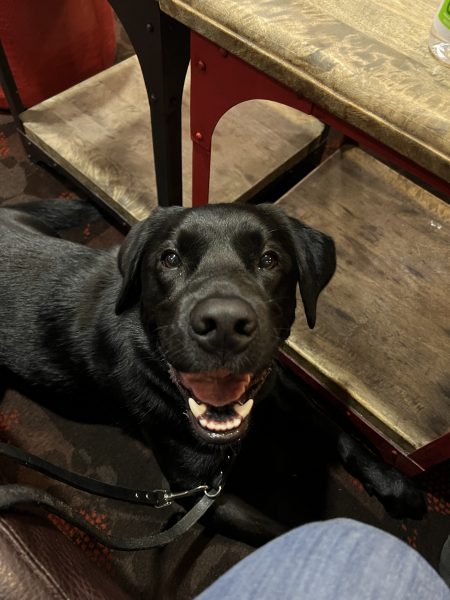 As a seeing-eye dog, Silkie is incredibly well trained. She’s also been personality tested so she’s not a threat to anyone. However, she has opinions and she communicates effectively. And I swear that sometimes Silkie flips the bird but in “doggish”.

This dog has woken me up at midnight, I am, 4 am and 6 am and it has barked all day on various occasions, although not usually all in the same 24 hours. The owner is a very unpleasant woman who appears to consider her dog to be just a lifestyle accessory and not a relational being. I feel sorry for the dog.

Silkie arrived in January. I toilet her in public spaces and in common areas of this housing estate on grass. This involves walking Silkie past the Yapinator’s yard.

At first this didn’t seem like a big deal. Then, just before Easter, the Yapinator disappear for a week or two.

When we walked past to go to the toilet space, Silkie looked through the fence and even stood on the stairs to the gate in order to look right into the property.

But then, like the cat, the Yapinator came back.

The return of the Yapinator

At first Silkie was happy for the Yapinator’s return. They sniffed through the fence then Silkie ambled on her way.

Silkie was happy right up until, at about 10 pm at night during Silkie’s pre-bedtime toileting, the Yapinator went absolutely ballistic barking and snarling and slobbering at Silkie as if she wanted to eat her.

She didn’t like it, but apart from feeling a bit put out – perhaps somewhat upset – she seemed okay.

Then the next day, Silkie started urinating right outside the Yapinator’s yard.

In fact, for the next several weeks, most of the time when Silkie toileted, she did so along that dog’s front fence or side fence. Whenever she needed to “go”, she made sure that she walked right over right near that fence to do her business.

After a while this behavior diminished, and she was much more varied as to where she was taking her dump.

Then the Yapinator barked at her again.

We’re not talking one bark, we’re talking full on ballistic “I’m gonna HURT you” bark, which is ridiculous considering this is a toy dog. Or maybe a little bit bigger than a toy dog but it’s small.

Silkie’s immediate response was to urinate right next to the steps up to that dog’s gate and all around the fence all over again.

She walked up to the steps and turned around so her rear end was nearly touching the steps while crouching to pee.

If she was a boy I think she would’ve copped a leg and peed on the steps. Then she turned around got up and walked across the top step to get to the other side and then walked away.

Silky has a definite way of expressing herself. I have a mental image of Silkie laughing, holding up a front paw then her middle claw extending. Thus I say Silkie Flips the Bird.

In part two I will tell you how Silkie revenged herself upon a human who kept kicking her.

Do you want to help raise puppies?

Seeing Eye Dogs Australia (SEDA) raises and trains puppies as seeing eye dogs and other service animals. They do a kick-ass job! But it’s expensive. If you’d like to donate to SEDA, here’s a link. And if you’d like to learn more about what they do, here’s a good place to start. (Note: SEDA is part of Vision Australia.)