This post talks a little about my training with Silkie. It might help people who are training their own dogs although my focus is really “OMG SEEING EYE DOG. PLUS LEARNING CURVE.” Just the basics took a while to write so the training will take at least a few more posts. Coming soon: handle walk while Silkie whines and howls; Escalators and travellators; scaring the shit out of witnesses while training; and more!

Find all the posts in this series here. The first post in this series has more cats; I will get back to the cats soon, especially cats plus dog, which can be delightful and/or hilarious.

On January 14, 2022, my seeing eye dog Silkie arrived. I was practically glued to the front window all day but she didn’t arrive until late. Well, it felt REALLY REALLY late but was really only mid-afternoon.

My trainers, Yoav and his apprentice Mikaela, talked me through the absolute basics: toileting, feeding and sleeping/tethering Silkie.

Seeing Eye Dogs Australia (SEDA) trains their dogs to accept tethering on a bed inside. The welcome basket included a custom-made tether of a particular length (maybe about a meter?) that is plastic-coated wire with a clip on either end. Yoav offered to install it for me but I preferred to get used to everything ASAP. Basically I looped the tether around a couch leg then clipped it to itself, leaving the other end free to be clipped to Silkie’s collar.

This photo shows Silkie’s collar: it’s mostly an adjustable nylon strap but has a short section of metal chain with three links. The links attaching the chain to the nylon are called “dead links” and the center link is a “live link”. To tether Silkie, I must always use the dead links but attach her lead to the live link. (PS I took this photo today; Silkie is lying beside me while I work on my desktop computer.)

Before placing the tether, we discussed where a good location would be for it. It needed to be somewhere like the living room so she wouldn’t be isolated. But there also needed to be adequate room so I wouldn’t trip over her.

Having clipped the tether to the couch leg, one of the trainers put the cover on Silkie’s FUTON. I never knew dogs had futons! Then we put it next to the couch so Silkie can lie on it when she’s tethered. This is where she was supposed to sleep as well as be tethered during the day when necessary. 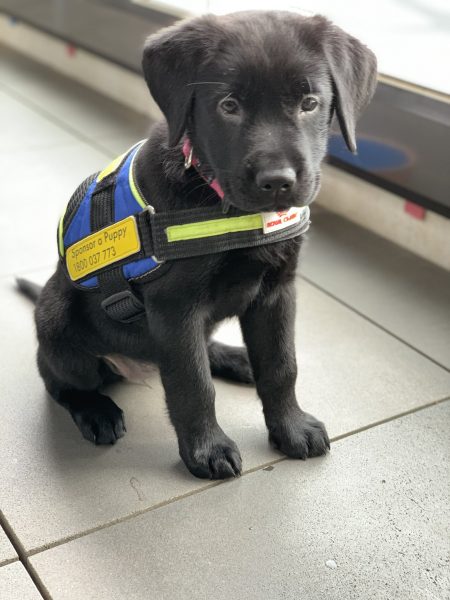 Royal Canin sponsors SEDA puppies, providing food free for them while they’re growing and in training. As you can see from this ADORABLE photo of Silkie as a puppy, SEDA trains their puppies to wear harnesses and those harnesses have the Royal Canin logo BECAUSE SPONSOR.

Yoav and Mikaela said I don’t have to continue feeding Silkie Royal Canin but, because it’s been her lifelong diet, there’s a process to change over. However, after my experience with our previous cat, Smokey, who had stomach problems, I’m happy to continue buying Royal Canin for my furbabies. (This is NOT a sponsored post.)

The trainers wanted to see where I planned to keep Silkie’s food, which is in a plastic bin with an airtight lid that I bought from a pet supplier. And I keep that bin in the garage, so the trainers were very pleased.

Silkie arrived with one free bag of Royal Canin dog food so Mikaela filled up the bin then sealed the bag with the leftovers. She commented that, when I start using the leftovers, I’ll know it’s time to buy more.

The food came with a cup measure that’s really a bit over a cup: it shows where the one-cup mark is before the brim. Mikaela showed me how to fill the measure and check that it’s not overful with my hand. Silkie was to have one cup morning and night. (Since then I’ve replaced that cup measure with an actual cup measure because I give Silkie quite a bit of kibble as rewards while we work. It’s important that I watch her weight carefully.)

Later Mikaela talked about how Silkie, as a Labrador, won’t have that “full” mechanism so can overeat. This makes it easy for Labradors to gain weight and difficult for them to lose weight. Yoav stressed how important it is not to have anything within Silkie’s reach – on the floor, on the counter, on a table – that she might eat.

I’ve heard of couch surfing before but never counter surfing. Counter surfing is when a pet – always Aurora, sometimes Meteor, never Silkie – puts their front paws on the kitchen counters. Yoav was really concerned that Silkie might be guilty of this bad behavior, so issued warnings!

I want to know how SEDA trained Silkie not to counter surf so I can apply that to my cats! Because Aurora in particular is naughty about the kitchen counters, I refuse to wash up alone. I can’t cope with fending her off, doing the washing and wiping up, then potentially getting cat germs on food-related items.

Silkie is guilty of coming into the kitchen with puppy dog eyes when we prepare food but she’s never stolen food she shouldn’t eat. She has, however, eaten food of the floor at home if we’re not quick enough to clean up a spill. And she wants to be a hoover when we’re out, sigh. At least she has the good taste not to eat cigarette butts!

Then there’s toileting. We’re still working on doing that “correctly”, sigh. But that’s actually a funny saga in itself, so I’ll probably write a separate post just on that.

The basics, then! The builder inflicted astroturf upon us and, for reasons, we’re not replacing it, at least not yet. Apparently dogs using astroturf as a toilet STINKS and requires weekly cleaning with chemicals. I have enough on my plate and I’m inherently lazy so anything other than scrubbing dog shit thanks!

My choice means I personally toilet Silkie all the time.

Think of all the times you’ve seen a New Yorker walking their dog on the footpath because they live in an apartment building. It’s a little like that.

Except Silkie is supposed to go on grass.

And her leash is genius: for working, it’s practically doubled over, clipped to itself. For toileting, I unclip it then re-clip it close to the free end so it creates a handle loop.

So I take Silkie out to the grass, lengthen the lead, and say “do your jobs”. She practically urinates on command. Poos are a bit more… biologically timed, shall we say?

Also, ideally I brace my feet so Silkie doesn’t pull me off balance then let her walk in circles around me, moving the leash from hand to hand. This is both training and biological: apparently walking in circles like that works certain muscles, helping move things along.

As I said before, the “toileting Silkie saga” is quite funny, so I’ll do a separate post later. Suffice to say that Madam hasn’t had an accident since she moved in, and I don’t even have to take her out in the middle of the night! Just before I go to bed and when I get up in the morning. Sleeping in is a thing of the past but it’s hard to complain when Silkie is so pleased to see me every morning!

The 14th ended with Yoav and Mikaela organizing a Zoom session for the next day (Zoom because PANDEMIC and other trainees). They also gave strict instructions to take it quietly and stay home the next day to start building a relationship with Silkie.

And on Sunday, day 2 of having Silkie, we started training about 6am so we’d be done and dusted for the day, freeing me up to leave Silkie tethered at home while I went to get my second Pfizer jab. The GP had postponed Friday the 14th’s jab because of supply issues so they rescheduled for the Sunday.

As I said in the intro, posts coming soon include explaining a “handle walk” that had the added feature of Silkie whining and howling although we’d been together for less than 48 hours. Also the “joys” of Escalators and travellators, another saga that really needs its own post. Especially because you need to know why I think Silkie’s current attitude to them is So. Damned. Funny! Also, I’ll talk about trainers scaring the shit out of witnesses while training, and more!

dark_matter_zine
•
Follow
Silkie: what is this place? Me: it’s our club, we just haven’t been here in about a year because pandemic 😷.
View on Instagram |
1/4

dark_matter_zine
•
Follow
Dressed for a night out during a pandemic: sitting outside at the George. #canberra
View on Instagram |
2/4

dark_matter_zine
•
Follow
I’m not quite sure how she manages it but Silkie has these techniques for pinning me down. She was holding on to my arm so tightly that I started getting pins and needles. And when I moved my arm she wriggled and sighed at me huffily, lol. #Dog #SeeingEyeDog
View on Instagram |
3/4