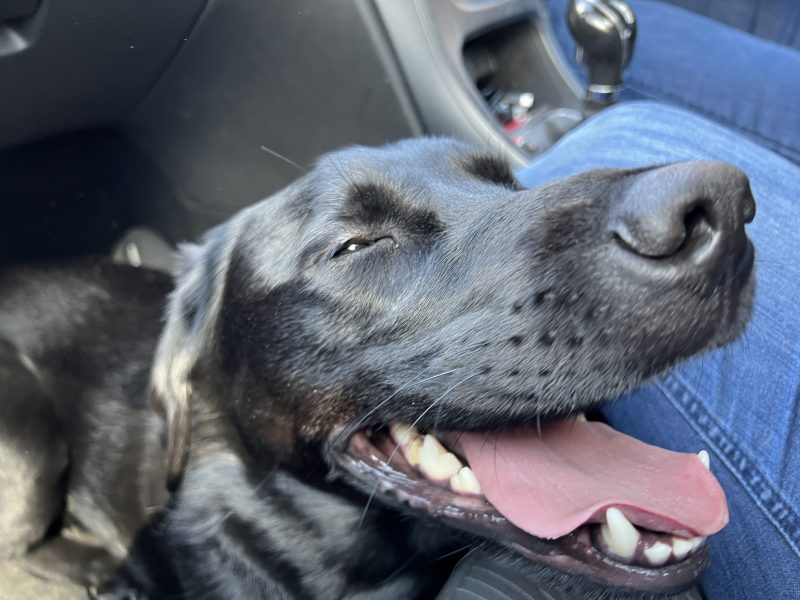 On the 15th of October we took Silkie to the vet for her follow-up leptospirosis vaccine. I’d never heard of leptospirosis before but the vet recommended it because a local dog died of it recently. And that dog hadn’t been interstate, which implies that the bacteria is in the environment. Now, about a month after Silkie’s first shot, I’ve learnt that leptospirosis is a problem during flooding, and people are getting it. So getting the jab was a good call!

Note: We’re not being flooded – at least not yet – but recent rains in Australia have been DEVASTATING.

When we pulled up in the car near the vetinarian’s practice, Silkie bobbed up from her place in the footwell and, as soon as I open the door, she lunged out of the car. First she pulled in one direction so I nearly lost the lead. Then she pulled in the other direction. She was SO EXCITED about visiting the vet!

When I finally got her harness on and we made it to the footpath, Silkie started walking in the wrong direction because we were parked in a different spot than usual. I corrected her. From that point she was fine.

Silkie walked quickly up to the corner, turned right, walked along street, then found the door. When we walked inside, she would have torn around reception and charged into one of the practice rooms if I wasn’t hanging on to the lead pulling back!

She was SO excited! Bouncing up and down! Wanting to play with the dogs in reception, wanting pats from the humans, and most of all WANTING TO SEE THE VET.

While we waited another family came in with a cat and a Small Human. Silkie is scared of Small Humans but she’s getting better. This kid was also a bit shy. With some parental encouragement, the Small Human gave Silkie a few treats from my treat bag. This was great because it’s the next stage in Silkie learning that Small Humans aren’t scary. And Silkie is extremely motivated by food. In our house there is a running joke that she works for food.

When the vet was ready for us, Silkie DRAGGED me in to the practice room. She gave the vet all her attention, bouncing up and down. When she realized she wasn’t going to get pets or treats with that kind of behavior, she sat to attention with her nose in the air quivering with anticipation.

The vet gave Silkie a lickimat with some Kong Easy Treats on it to keep her attention during the jab.

Silkie gave that lickimat her full attention until the treats were gone as was the vaccination needle.

In reception again, Silkie was still over-excited. Even so, the Small Human came to say goodbye and they were both happy.

While the minion paid, I put Silkie’s harness on, then we left.

Once out the door, her behavior was back to her working excellence. I said “find the car” so she went straight there.

In the car she had the post-vet happies, as in the photo.

Online lots of people share their dogs’ fears of the vet. All I can say is you’ve got the wrong vet.

If you enjoyed this story, you’ll love my story about Silkie in hospital with me.