Silkie and the staffers were match made in heaven. So this is that story.

In recent months I neglected DMZ while trying to cope with the aftermath of bullying, harassment and – most recently – medical dramas. My apologies for not sharing my Silkie stories! She is adorable and has had many adventures to warm your heart. So I’m going to try to post more of these here.

Anyhoo, as you may already know, I’ve been in and out of hospital a bit over the last few months. I’m ok: doctors went HUNTING for cancer and didn’t find any. Plus I’m recovering. We (the doctors and I) think we know what happened and why, more or less, a journey complicated by having such a rare disability. So fingers crossed for the future.

However, this isn’t about that, this is about THE SILKIE.

On 10 July I started – pardon the vernacular – pissing blood. Silkie doesn’t like the smell of blood. When Meteor, one of our rescue cats, gets thingy, he tends to fang me. Even though I clean up his fang marks and cover them with Band-Aids, Silkie is all sad and licks and licks and licks the band aid and the area to make me all better.

Can I get an “AWWWWWW, ADORABLE”?

So you can imagine when the blood started coming, Silkie was Not Happy Jan. (For those who came in late, “not happy Jan” is from an advert years ago that entered Australian vernacular.)

I’m a bit vague on how Silkie was behaving at that time because pain, stress and blood. So we’ll fast forward.

We spent SIX HOURS in the Emergency Department on a Sunday afternoon-evening because triage didn’t think internal bleeding was as important as someone visibly bleeding. Charming. Comments were made by the ED doctor later.

During that time, Silkie was a Good Puppy. She stayed by me, wasn’t happy when I went to the toilet without her. (I tended to leave her with hubby because the loos weren’t that big and I didn’t have the capacity to manage her.)

Every time I returned from the toilet, Silkie reacted as if I’d been gone FOR HOURS. But, to be honest, that’s standard for her. At home she usually comes with and supervises.

But Silkie wasn’t just stressed by me, her favorite human, being sick. There were SMALL HUMANS in ED too. Silkie is afraid of Small Humans. Once Small Humans grow into larger humans, like maybe grade 3 (I’m not sure where the line is), then they’re WONDERFUL FABULOUS PEOPLE WHO PAT HER. But Small Humans are scary.

Our theory is that she’s been told off for being overly happy and enthusiastic around Small Humans or maybe someone was once scared of her. Either way, she now wants to hide from them. This is a problem at times, one we’re working on, but that’s for another post.

On the Emergency bed 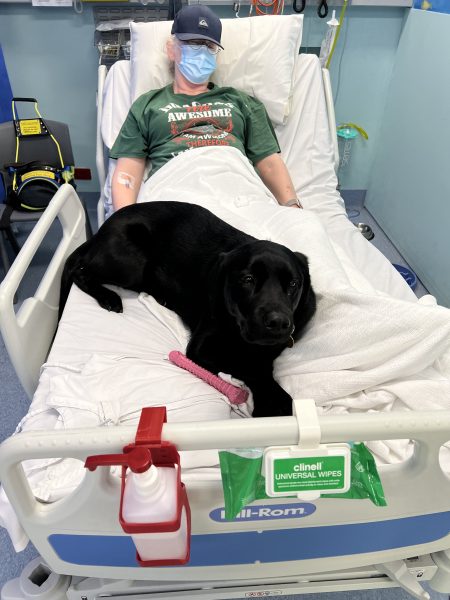 Once we left the waiting area for an emergency bay, Silkie garnered comments.

I explained that she’s allowed most places except theatre.

Nurse: “Oh, ok. Would you like me to lift her onto your bed?” No sneaking of pats agenda there 😉

I was surprised. I wasn’t going to ASK but I was REALLY grateful.

Hubby took this photo of Silkie on my bed in Emergency.

Shortly afterwards, another patient walked into my bay (the curtains weren’t drawn) and demanded “Did that come with the bed? I WANT ONE!”

And loads of staff visited for pats. Repeatedly. We were there for hours. Having a dog in hospital is THE. BEST.

I’m sure Silkie was good for morale.

Of to the ward 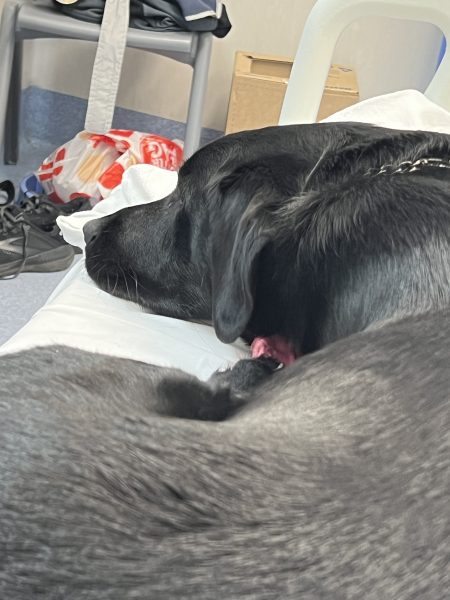 I was out of it, especially the first day or two. So much so that I didn’t realize I hadn’t brushed my teeth or hair until Tuesday, then hubby had to bring in the necessaries.

Silkie spent her days lying on my bed. She didn’t get up and wander around, she didn’t get playful like she does at home. She just lay there, leaning against me or draped over my legs.

Hubby didn’t WFH (work from home), he worked from hospital. Most of the day he sat in a café in the hospital, then came up to toilet Silkie when he thought she’d need it.

Jumping on the bed

The first time a nurse lifted Silkie onto the bed. That gave Silkie permission. Afterwards she was helped up a time or two I think. Early on, she scrambled onto the bed, it seemed a little high.

But, by the last day, Silkie leapt onto the bed gracefully and landed neatly. One of the nurses had just offered to lift her up then was really surprised.

A few weeks later we spent another night in hospital and staff were surprised at how comfortable and entitled Silkie was about the bed.

And then, after my cystoscopy, when Silkie came into Recovery she just jumped on the bed and lay on my legs (that bed was really narrow). “My human, my bed, my human”. Staff were surprised but didn’t argue.

By Tuesday of that first hospitalization (or it might have been Monday), Silkie and I met Mr Ambo Pants. He’s not a nurse, he said so.

I can’t remember any names or much else. I was very high on all the lovely painkillers: morphine, fentanyl, not sure what else.

So I guess he was a ward aid or something? Anyway, I remember his Ambo Pants (the green loose trousers with reflective bands like paramedics – ambulance personnel – wear. Aussies call paramedics “ambos” so he’s Mr Ambo Pants.

Mr Ambo Pants apparently has a tattoo on his forearm of dog paw prints. When he arrived at work, someone said they had a surprise for him and told him to visit my room. He was DELIGHTED. He insisted on toileting Silkie although hubby was available.

In fact, Mr Ambo Pants was so enthusiastic that he took Silkie “for the change of shift BECAUSE WE HAVE TO”. I’m guessing that staff gave Silkie all the pats. However, they only did that once so I’m also guessing that Silkie was too stressed about being away from me so it wasn’t as much fun for staff as it would have been if I was there.

Mr Ambo Pants won because “look I’ve even brought my own extendable lead for her”.

Much as I love Silkie, the thought of the winner of an argument getting to toilet her still makes me laugh. You want to pick up dog shit? BE MY GUEST.

I had to encourage Silkie, STRONGLY, to go with Mr Ambo Pants the first time or two.

After the first few times, she jumped down and went into the hallway when she heard him. Sadly, she learnt that his job wasn’t ONLY to spend time with her, sometimes he’d walk down the hall to see to other patients. She was sad.

So then when we heard him walking up the hallway and her head bobbed up. When he reached our door, she jumped down to meet him. She wagged her tail, enjoyed his pats, and appreciated the breaks he gave her.

I went to the staffers’ desk when we left but everyone seemed busy. And Mr Ambo Pants may not have been there. So I tried to say goodbye but it didn’t happen. Silkie loved those people though! 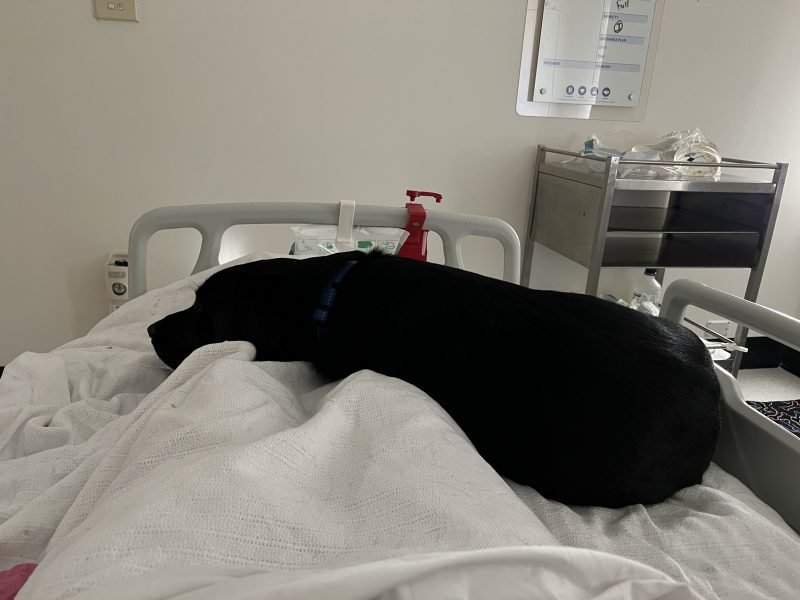 Silkie’s “best of both [hospital] worlds”: she’s lying on my legs while watching the door in case someone comes to give her pats.

Mr Ambo Pants tried giving Silkie a bit of exercise and safe zoomies, hence the extendable lead. However, I’m pretty sure she was too stressed about being separated from me to really enjoy it.

Then we arrived home.

After our overnight stay a few weeks later she did the same.

After the cystoscopy she was pretty happy to be home, also zoomies, but barely. But that was more in the realm of a daytime adventure.

Interestingly, when we went to Sisters In Crime (that I totes must write up too), we stayed overnight at a lovely place… but Silkie did NOT do zoomies when we got home. She was happy to get home but there’s post-hospital zoomies and just “Oh we’re home”.

I suspect she might have been a bit stressed thinking the travel was to be rehomed again, so she was happy to be home and a bit extra cuddly too.

Over the past several months Silkie revealed her personality. We seriously argue without her making any sound. Whole conversations take place! I must write more of these posts to share her with you. I’ll try to do better.

Lately I’ve been struggling, not with lack of material – so many little stories I can tell in bite-sized pieces – but with feeling that it’s all pointless. I feel like I’m shouting into the void. And I’m struggling in many ways, including the fact that I haven’t revealed the 2021 CripLit Keys winners, haven’t made their trophies, and haven’t finalized the 2022 winners. I worry what people think, I feel so self-conscious and such a failure. In April 2021 I was in the process of developing designs and gathering materials to make the 2021 trophies then Diva and the Bigot’s pile on just shattered me personally and destroyed my self-confidence.

Do you want to know who I selected as winners?

Do you think my 2020 trophies were ok? I was thinking about making them a bit smaller in the future but a similar style yet still tailored for each winning story. Which is a challenge in itself. Especially when I’m in awe of the artwork of the winner of winners in 2021. I guess I want to know: if you got one, would you treasure it or bin it?

Do you have suggestions?

After so many people telling me to be silent, to stop working on Dark Matter Zine permanently or at least stop indefinitely, saying I’m not qualified to do this although I have multiple degrees and years of experience… I hear their voices every time I try to write a review, every time I prepare for an interview. God, it’s been SO HARD. It was bad enough when the Galactic Suburbia crew had a go and then, with their friends, orchestrated some bullying and supported a stalker-friend-of-theirs bullying me (she stalked and bullied me online for several years). After all these years and a ton more shit, I just don’t have the resilience anymore.

What do you think? I just want to know if it’s a waste of time and money or if it’s appreciated. After all, no one supports DMZ financially, this all comes out of my husband’s pay packet. Is it worthwhile?