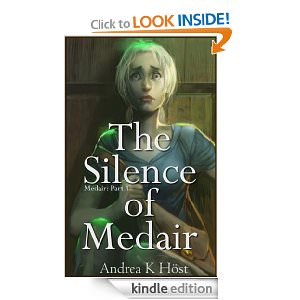 The Silence of Medair is set in a fantasy world of several nations with distinct people groups who all seem to appear European. The colours range from the darkest range of tanned with black hair to white hair, white skin and pale blue eyes of extreme albinism without the poor eyesight. This pale people are called Ibisian and derided as ‘White Snakes’.

Medair, a young woman, lives as a hermit on a mountain whose population has been wiped out by plague. Some people arrive, hunting Medair, so she flees. In her flight from her pursuers Medair passes a fire with a smell of scorched meat. Medair circles around the afflicted area, tethers her horse and then goes back in to investigate the scene with no apparent motive other than curiosity although fleeing from her pursuers should be her priority.

In the ravaged area, Medair discovers evidence of a battle, many corpses, some valuable magical items and an unconscious boy. Taking pity upon the boy, Medair single-handedly – without mention of use of magic – puts him on the horse, mounts behind him and rides away. The boy later puts a geas upon Medair, magically forcing her to take him to a city well out of her way. He shape-shifts into the form of an Ibisian adult male, his true form.

A significant portion of the first 20% of the book is narrative in the form of Medair’s memories to explain the backstory juxtaposed with the above opening story. Medair remembers being a Herald in an empire that went to war in self-defence against a nation of refugees who rejected the proffered asylum in favour of conquest. Medair went on a quest to find a legendary horn that would summon an army in time of greatest need, although many had tried and failed previously. Upon securing the goal of her quest, she slept in a place she knew to be ‘outside of time’, so she woke up five centuries later. When she returned to her world she found that the invaders had become settlers, inter-marrying with the natives to become one with the people. Medair had become a legend among a sect of natives who, as total strangers with no reason to trust her other than calling herself Medair, demanded that she commit an act of terrorism at a wedding. When she refused, this group attacked her. Instead of completely changing her name to prevent further difficulties, she fled civilisation to live alone on a mountain. The narrative revisits the same memories a number of times while expanding upon them.

Medair finds the Ibisian’s companions that he inexplicably left behind in a town before going into extreme danger. The group then travel to the capital city together, fleeing trackers.

Early on I assumed Medair was dark-skinned because of her focus on the whiteness of others, but about half-way through the book Host mentions that Medair has blonde hair. It appears that Host has chosen to deride a ‘white’ people group: Host seeks to separate her protagonist racially based upon a position of ‘other’. Medair is of the same kind of people group as Host and it is politically incorrect to revile people groups of darker skin, so Host has used white people – albinos – instead. This trope has been used so often that there is a group who lobby for more reasonable and equitable representation of albinos in the entertainment industry. Host’s theme of refugees seeking to conquer a country instead of accepting willing assistance plays on the fears of many Australians who fear boat people and terrorism.

Medair’s hatred of the invaders is neither effectively realised nor resolved. Medair begins from a place of ambivalence, hiding on the mountain after discovering the Ibisians had been assimilated. From that point of ambivalence, Host uses broad brush strokes somewhat evocative of melodrama in her attempt to instil underlying hatred in Medair, justifying internal conflict. This would have been far more effective if the story had begun with Medair as a herald, living the story, showing the reader the story development and character development rather than just telling the reader about it in retrospect.

Early in the story, wild magic is introduced as a very powerful, very dangerous magic that is banned. The Ibisian’s homeland was destroyed because someone tried to use this wild magic to bring back her dead child. [spoiler alert] Later in the story, wild magic is used to very different affect, after which it is established that if the wild magic is used a third time it will have the same outcome as the first time. There is no explanation given for this inconsistency. Furthermore, it is difficult and draining for magic-users to use much smaller forms of magic, causing spell-shock and even death. This is why the person Medair rescued was unconscious: he shielded himself from a magical blast, causing spell-shock. Later, he performed a crucial role in a much stronger, more demanding shield; although expected to die, he did not suffer nearly as much as he did after the smaller, simpler shield. Significant inconsistencies like these in the rules of magic detract from the story. [spoiler ends]

Host’s prose is unwieldy, obstructing the reader. I found myself re-reading passages to interpret them correctly. In places narrative sentences omit either nouns or verbs or both, such as ‘Sensitive and disturbingly intelligent.’ The passive tense is used far too frequently; this distances the reader from the immediacy of the story, for example: ‘Thefts usually ended up with the stolen bags and their contents being destroyed in an effort to break them open’ and ‘The road was well supplied with fallen logs.’

An invented system of time measurement was superfluous to the story. I’m guessing that a ‘decem’ was a unit of measurement similar to an hour, with an additional alternative unit that emphasised the metric nature of time measurement with no apparent need for this within the story. Host takes pains to invent a new system of title or address for individuals then, approximately half way through the story, Medair is addressed as ‘Miss’. Within one explanation, Host defines the time of the Ibisian invasion – 5 centuries ago – and the beginning of the Medarist movement as ‘a little less than 5 centuries ago’ and then said, ‘The Medarist movement had begun several centuries into Ibisian rule.’ The unnecessary repetition is worsened by self-contradiction.

In my opinion the Silence of Medair has potential if its problems with the plot and magic system are resolved. The prose also needs substantial work: I want to experience the story with the protagonist rather than read information dumps that are narrative translations of internal dialogue. I want to read a narrative that paints vivid pictures with a more active voice and less unnecessary verbosity. I don’t recommend this story but it was shortlisted for an Aurealis Award in 2010. According to Amazon, the Aurealis judge’s report said, ‘You can read [it] for its strong, conflicted heroine, its playful subversion of fantasy tropes, or its deep, detailed analysis of the nature of racism. If not, just read it for the beautifully crafted prose.’ Amazon reviews rate the Silence of Medair as over 4 stars with 21 customer reviews.

It is a rare event for ‘everyone’ to agree on anything. 🙂