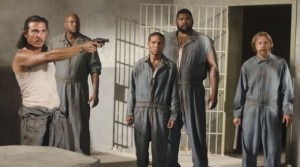 ‘Sick’ begins with Rick (Lincoln), Daryl (Reedus), T-Dog (Singleton), and Glenn (Yeun) leaving the cafeteria with Hershel (Wilson) on a stretcher. The group of convicts who were holed up in the cafeteria follow them tentatively.

While Rick and the rest of the group attend to Hershel, Daryl holds the convicts at bay. Once Hershel is being attended to, Rick rejoins Daryl and explains to the convicts the state of the world. They reveal they have been holed up in the cafeteria for nearly a year — since the outbreak became widespread.

Rick and the convicts’ ringleader butt heads when it comes to living arrangements. Rick ends up agreeing to help the convicts clear a cell block for themselves but only if they share half of the food that is left.

Rick, Daryl and T-Dog attempt to teach the convicts how to take down walkers. Their first attempt is a monumental failure with the convicts trying to beat the walkers as they would a human. The second time around is more successful but one of the convicts is scratched by a walker’s exposed radius. As the two groups discuss what should be done, the convicts’ ringleader beats the infected man’s head to a pulp.

The convicts and Rick’s team push on but after several attempts on Rick’s life by the convict ringleader, Rick lodges an axe into his brain. One of the other convict’s objects then flees into a yard of zombies. Rick locks him out. The two remaining convicts swear they are small time crooks, imprisoned for non-violent crime, and are allowed to live in the newly cleared cell block.

Maggie (Cohan) tells her unconscious father that it’s okay to let go. However, he pulls through the initial injury and shock, waking to grasp Rick’s hand.

The episode ends with Carol (McBride) practising a caesarean section on a dead female walker as she will likely have to perform Lori’s (Callies) with Hershel out of commission. It is implied from the camera angles that Carol is being watched from outside the prison fence.

Rick is becoming more ruthless to protect his traditional and adopted family. I don’t dislike it but I can’t say for certain that I love it. I did NOT see the axe to the skull coming. Though I probably should have.

More of the friction between Rick and Lori has been revealed but it’s still a little bit muddy and I’m hesitant to just assume I now know the reason for their distance.

“Look, I know that I’m a shitty wife and I’m not winning any mother of the year awards, but I need you to know that not for one second do I think there is malice in your heart.”