Shuri is the 13-year-old sister of King T’Challa, Black Panther of Wakanda, who has reigned for the last 3 years since his father’s death. She works in a laboratory, developing splodey technology. Her “friend” (as arranged by her mother the Queen Mother), is Dora Milajae in training K’Marah. K’Marah is the granddaughter of the ruler of the Wakandan Mining Tribe. She enlists Shuri for an (illicit) expedition to a ceremony outside the palace. During this expedition, Shuri has a vision before learning the Heart Shaped Herb that gives the Black Panther his powers is dying. Thus the hi-jinks begin. They race to save the herb while Challenge Day looms ever closer and armies amass outside Wakanda’s border. 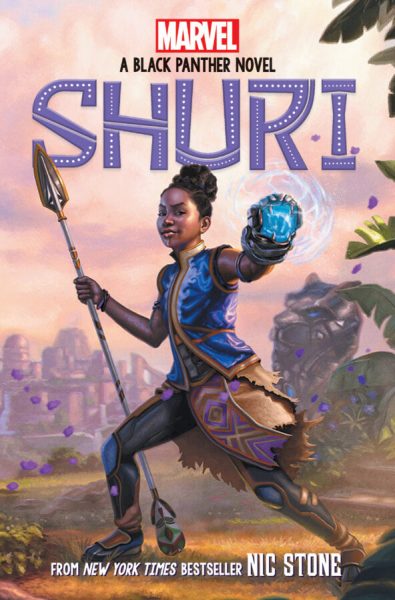 Shuri is a princess whose mother is intent on forcing her to be “ladylike”. The Queen Mother ended Shuri’s combat training and requires her to dress and behave “appropriately”. Unfortunately, Shuri finds mother’s requirements ill-suited to her nature and passions.

Throughout the novel but especially in the early scenes where Shuri submits to ceremonial preparations, she ponders the restrictions imposed upon royal women and the apparent absence of royal princesses and Dora Milajae (Wakanda’s revered warrior women) from memoriums like portraiture and scupltures. She obsesses over the absence of women Black Panthers and her future as an “invisible” princess.

In short, Shuri is a kick-ass feminist questioning the status quo.

A black American wrote Shuri, so she’s an #OwnVoices author. (I recently watched a discussion online where a black guy said not to call black Americans African Americans and why.) The story felt real in terms of race. Shuri notices the occasional white person in Wakanda the way I noticed the occasional colored person in Hobart, Tasmania, after the White Australia Policy was repealed. When in London, Shuri notices other people noticing her for being black, the way I noticed people noticing me when I walked through Little India in Dandenong (white people drive through that area unless they’re old and poor.) Shuri and co’s comments about “colonizers” and worries about white people are consistent with history and the movie.

Furthermore, Wakanda’s near neighbors, African countries envious of Wakanda’s wealth and technology while resenting Wakanda’s isolationist policy, invade Wakanda to seize wealth. This, too, is consistent with the movie although it appears to overlap: surely three years after the events in the movie, things would have moved on? T’Challa planned to become more active, after all.

In terms of race, the combination of an Own Voices author and her storytelling make Shuri an exposé of racism and racial conflict while being a kick-ass feminist and anti-racist novel without lecturing or hectoring.

Various aspects of this novel are inconsistent with the movie. For example, in the movie Shuri is in her twenties. The audio-description specifically says so. However, in this novel she’s 13 but with the independence of someone years older. She even drives her own aircraft.

And the head of science in Kenya is 15.

As a parent, I freak out at the thought of kids feeling entitled and empowered to do splodey stuff inspired by books like this. However, the narrative challenges – and dances around – the inappropriateness and danger of such experiments. All the while Stone uses these comic-book-like and Q-from-Bond-like scenes to equip her heroines for future battle while eliciting smiles from the reader.

Furthermore, in the movie a shaman strips the Black Panther of his powers. T’Challa also sets aside his costume before facing challengers. In this book he keeps his powers and the costume. This is a plot hole: the urgency of saving the heart-shaped herb would be ramped up if the Black Panther needed to take it again after the challenge.

There are significant differences – discrepancies – between the book and the movie, some of which are necessary in order to begin what I assume will be a series of upper-primary to middle-school books that will appeal to many adult readers as well.

I usually only discuss book design if it’s special. Shuri is special. The hardcover is fairly plain purple and white with a lovely dust jacket showing the above image. Purple end-pages precede a few images that are purple-and-white instead of grey-scale.

The text is purple on soft eggshell pages. The color might be a problem for some people but I found the contrast sufficient. Anyone using a desktop magnifier should be able to change the color scheme and/or covert the text to speech.

Shuri uses font variations to differentiate portions of the text like Shuri’s “mission logs” from normal narration. I found the fonts were starkly different and yet consistently read-able. Shuri uses italics a bit, one of the harder fonts for me to read, but these passages are mostly short. I do not know how this would translate to an ebook.

If my daughter was still in primary or even high school, I would gift her the hardcover version of this book. Because PRETTY. Also feminist. And my daughter has Indigenous ancestry, in which she needs to learn to take pride.

Shuri is a teen with intelligence and agency who’s out to save her country regardless of restrictions imposed by dismissive adults. She’s a thoughtful and enlightened role model for young women and young black people developing their identities, and a foil for white boys and men to counter other representations. This novel fits neatly in with Spy Kids, Alex Rider and Percy Jackson while busting boundaries. Shuri is a worthy successor to Hermione Granger. I highly recommend this novel. 4 stars.

This Marvel webpage has an excerpt including pictures.