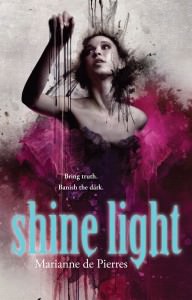 Welcome to the Shine Light blog tour. At each stop we’ll be revealing something new about the characters in Shine Light. What makes them tick? Do they have any secrets? Read on to find out . . .

Naif pulled her hand from his and hastened down the steep steps.

Jarrold and Charlonge were already on the gantry and the pirate Plank stood to one side manning the winch.

‘We’ll make two drops, the second with some supplies for you. Each drop must be done quickly,’ said Ruzalia.

‘When you’re down there, think twice before using the kars. Once you’re on them, you’re trapped.’

‘How will you know what’s happening?’ asked Naif.

‘There are prayer wheels near Illi, Vank and Los Fien. I’ll send draculins to them regularly. Leave any messages on the roof wrapped in cloth. They’ll bring them to me. Now, two more take the first ride so there’s room for provisions on the second.’

Naif glanced at Emilia and Markes. She could not bear to be on the gantry with them. ‘And me.’

The four of them huddled together as Plank began to unwind. In jerks they were lowered into the dark.

Ixion closed its sticky fingers around them as they descended and even the stunning night rainbow of party lights could not distract Naif from her fear. What would happen next?

It had seemed so mysterious when she’d first come. Sinister but beautiful; a place like nothing she’d known, redolent with musk and moonflower and haunted by strains of music that fired her senses. Back then she’d found it hard to resist its lure, but now she felt only apprehension and a desire to make Ixion safe.

‘What are they?’ he asked, pointing at the bright lines that marked the cable kars, and the sparkling clusters of lights around the churches.

‘Ixion’s churches. Vank, Illi, Agios, Goa, Los Fien,’ she listed. ‘And at the top is Danskoi.’

Less brilliant but just as alluring was the cobweb of fairy lights in between them.

‘And those are the clubs. Abraxas, Bella Death, The Drop, Grave Dance and Ravens. There are some smaller ones as well – they’re more like dugouts in the rocks than clubs,’ said Charlonge.

Naif could see Jarrold quivering with excitement and she felt the weight of guilt at having brought him here.

From the moment she’d asked for his help on Grave he’d become marked by the Elders as rebellious. Whatever happened, she must watch out for him. He could never return home because of her.

What happens next? Visit http://bookprobereviews.com/ to find out!

Though Varonessa is a minor character in the series she holds the balance of power among the Ripers, and Lenoir and Ixion’s future hinges on her. In SHINE LIGHT her loyalties are tested, tipping the scales in the final battle.

Varonessa’s position as adjudicator is familial, not won by being more powerful than the others. Though, needless to say, her power is strong and she possesses certain abilities the others don’t. Back on the Ripers’ home planet she is from a line known for their inherited adeptness at being able to steer a steady path in negotiations. The Ripers are by nature an aggressive and dangerous species, therefore the role of negotiator among them is revered and brings with it its own supporters. Varonessa must stop Brand and Lenoir’s factions from destroying each other.  Her task is much more fraught on Ixion than if she had been on their home planet with the resources of her lineage around her.

I would loved to have explored the internal politics of the Ripers much more closely, but I felt it might risk slowing Naif’s story too much. Characters like Varonessa, who constantly mediate are quite fascinating. You have to ask … what is their moral code? Must they subjugate it to get results? How do they feel whole when everything is compromise?

I once had a vivid dream that was all about a long negotiation between two people, conducted with neither party ever seeing each other. The dream had a brilliant ending and I fully intend to write the story of it one day. Maybe Varonessa might be in it. J

Break each code at the end of every blog post on the tour and your name will go in the draw to win a**super mystery prize** basket. Email your answers tomarianne@mariannedepierres.com.

Ready for your next fix? Meet the Ripers at http://bookprobereviews.com/

Did you miss the feature on Dark Eve? See http://paranormal-angel.blogspot.com.au/ 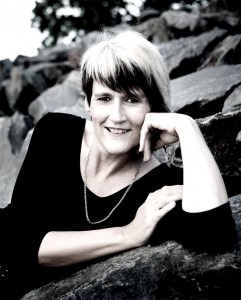