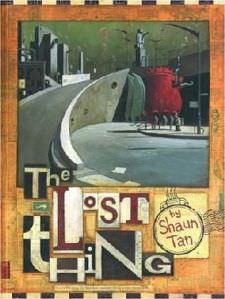 The Lost Thing is a move based on the book by the same name. A boy is on the beach collecting bottle caps, only to discover the lost thing, a creature distinctively of Tan’s creation. The boy tries to help the creature find it’s home, a place for it to belong, but no-one helps him. Eventually he takes it home, but his parents don’t want it around. The boy cares and wants the lost thing to be happy, not swept aside or forgotten in a busy world.

Beautifully illustrated and brought to life by animation, the art was consistent with Tan’s original work in the beautiful soft tones consistent with the gentle tone of narration. At times the animation reflected the original source of material by seeming almost comic strip in form. This was used as a means of telling of a journey with events separated by a little time, and was used effectively.

The Lost Thing is a gentle story aimed at viewers of all ages with a satiric undertone for older viewers. Tan interprets his own book here. Very short, The Lost Thing left me wanting more, perhaps a collection of Tan’s work brought to life on the big screen.