In the epic conclusion to the series that began with the award-winning A Crucible of Souls, Mitchell Hogan combines the wonder of classic sword-and-sorcery fantasy with the grit of the modern masters. Find A Shattered Empire on HarperCollins’s website.

In a battle of armies and sorcerers, empires will fall.

After young Caldan’s parents were slain, a group of monks raised the boy and initiated him into the arcane mysteries of sorcery. But when the Mahruse Empire was attacked, and the lives of his friends hung in the balance, he was forced to make a dangerous choice.

Now, as two mighty empires face off in a deadly game of supremacy, potent sorcery and creatures from legend have been unleashed. To turn the tide of war and prevent annihilation, Caldan must learn to harness his fearsome and forbidden magic. But as he grows into his powers, the young sorcerer realizes that not all the monsters are on the other side.

And though traps and pitfalls lie ahead, and countless lives are at stake, one thing is certain: to save his life, his friends, and his world, Caldan must risk all to defeat a sorcerer of immense power.

Failure will doom the world. Success will doom Caldan.

If you’d like to read the series of extracts, start here at VoyagerOnline.

Hundreds of Quiver cavalry crested the hills and poured toward the jukari — steel-tipped lances gleaming, iron-rimmed shields hanging by their sides, hooves trampling the grass.

Both the trebuchet missiles and the flights of arrows had been a distraction.

The distance between the cavalry and the jukari closed with frightening swiftness. Then the horses were among the creatures. Caldan could hear lances snapping from where he was— although it could also have been bones—along with the squealing of horses and barks from the jukari. Splintered wood filled the air. Shouts and screams erupted. Lances now abandoned, swords were dragged from sheaths and flashed down. Injured horses toppled and flailed.

Riderless mounts bounded away in a lather.

The archers positioned themselves in the corridors between the armies, which were now advancing steadily on each other. Arrows still peppered the enemy, though now they were aimed farther behind and to the other side of the cavalry charge.

Foot soldiers broke into a trot, urged on by their commanders, and then they were in the melee. Shields rose to meet jukari weapons, and more often than not were broken by the force of the blows. Short spears and swords darted out in response. Yells and screams went up. Everywhere, Quivers hacked and slashed, weapons covered with black jukari blood.

More arrows rained down like angry insects. The cavalry withdrew and gathered themselves for another charge, while the jukari milled in confusion. They turned their attention to the foot soldiers, only to once again get hammered with a howling rush of horsemen. They crashed through scattered lines with barely a pause until they found themselves slowed as an organized mass of jukari came to the fore.

Blood pitched into the sky and to the ground, both red and black. It sprayed and spattered. Wooden shields cracked, arms broke. Quiver and jukari scalps split, skulls smashed. Those unfortunate enough to lose their footing or fall injured to the ground were finished off in short order, either by enemy weapons or the trampling feet of those around them.

The soldiers from the ships joined the fray, coming at a rush into the unprotected side of the jukari host, and for a few breathless minutes, all was chaos.

Across the battlefield, injured men dragged themselves back behind the front lines, allowing eager — and some not-so-eager — soldiers to replace them. They hauled shattered weapons and hacked armor, notched swords and shields sporting broken shafts of arrows and javelins.

Thousands sprawled dead and dying — men and jukari and horses, some so mangled they were indistinguishable from one another.

Then the jukari retreated, horns of their own sounding above the tumult.

Quivers dragged wounded comrades to safety, while the cavalry urged their mounts out of the throng and to the side. Men-at-arms surrounding nobles and their sons backed away as quickly as they could. Fallen standards were raised again, dirt-stained and bloody.

And the Quivers kept shooting flights of arrows, with a greater intensity than Caldan had seen before. Shafts made a thatch of the sky, chasing the jukari like an advancing storm cloud, peppering them with injury and death.

This is an extract from A Shattered Empire by Mitchell Hogan which is published by Harper Voyager and available in all good book stores and online now. This excerpt is part of a series featured on various websites to celebrate the novel’s launch.

When he was eleven, Mitchell Hogan was given The Hobbit and The Lord of the Rings to read, and a love of fantasy novels was born.

When he couldn’t stand putting off his dream anymore, Mitchell quit his job and finished the first draft of A Crucible of Souls. It won the 2013 Aurealis Award for Best Fantasy Novel and was listed as one of the Best New Series by Audible for 2014. Mitchell lives in Sydney, Australia, with his wife and daughter. 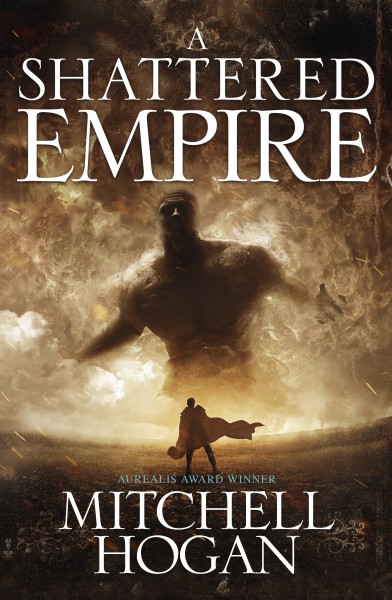