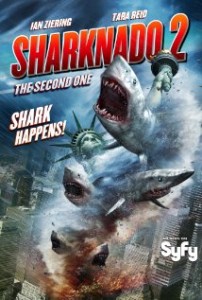 The tagline for this much anticipated film is ‘shark happens’ and does it ever.

Fin Shepard (Ziering) and his ex-wife now girlfriend April Wexler (Reid) are flying to their childhood home, New York City. As they are flying their plane encounters a storm. A storm filled with airborne sharks.

With sharks causing havoc to the plane, its passengers, and the pilots, it falls to Fin to land the plane. As he does this though April has her hand bitten off by a shark. Once he has landed the plane and made sure April pulls through her surgery, Fin must brave the storm to reunite his brother-in-law (McGrath) and nephew (Palminteri) with their family.

Of course, it is also up to Fin to stop the three sharknadoes that are on courses to collide before they merge into a super-mega-sharknado. A storm of ‘biblical proportions’.

My feelings vs cinema purists

I have impatiently waited a very long time for Sharknado 2: The Second One. Let me tell you, dear readers, it did not disappoint.

The cinema purists would likely have a lot to hold against Sharknado 2: The Second One. It has terrible acting. Tara Reid’s acting includes one scene where I’m sure she was supposed to look terrified, but it looked more like she was trying to smile at the shark while struggling with a bad case of gas. It had a character whose hand was bitten off, who had suffered major blood transfusions and surgery, running around the city showing no signs of pain whatsoever. It had a cheesy theme song.

These are things at which a cinema purist would probably scoff. Not this reviewer though. This reviewer was in b-grade bliss.

This reviewer loved the fact that there was a Nightmare at 20,000 Feet homage. The tacky dialogue. The scene where Ian Ziering plays a version of Frogger, leaping on the backs of sharks to cross a body of water, only to be met with Mark McGrath’s joke about jumping the shark. That Tara Reid’s newly amputeed character tied a buzz saw in place of her hand and cut a shark in half with it. The cameos. The bad CGI. The part where Ian Ziering rides a falling shark until the shark is impaled on the Empire State Building.

There were sharks … in a tornado … and Ian Ziering set them on fire.

If you like fun movies, don’t mind a bit of obviously fake blood, and want to laugh a lot more than you should at things that would be highly inappropriate in reality – you need to watch Sharknado 2: The Second One.