If you’ve been into any big toy store in the last several years, you’ll notice that the girls’ aisle is mostly bright pink and lavender.  It’s so monotonous that, in spite of the brightness of the pink, it’s BORING.  The girls’ aisle has hairdressing and home-making toys interspersed with fashion and dolls as if girls are interested in nothing else.

The boys’ aisles have all the cool colours and the best toys, gizmos and gadgets with nerf guns, water pistols, the best Lego products, action and adventure.

This year sexism seemed to reaching new heights when I saw this, a short article with a picture showing a boys’ laptop with 50 functions and a larger screen while the girls’ laptop has 25 functions and a smaller screen with keys that look like contraceptive pills in their packet:  report by Gwen Sharp, PhD here.

My immediate reaction was WTF?!  If I had a little girl, I’d get the boys’ laptop – hopefully without my daughter seeing the alternative.  I’d add a bunch of stickers and puff paints for her to decorate the case as well – why not include creativity to personalise the product?

It got worse though:  apparently in a previous year a girls’ toy microscope was less powerful than the boys’ model (report by Lisa Wade here) as if a girl who is interested in microscopes doesn’t need as much power as a boy -_-  Seriously, people, that career glass ceiling is so entrenched it’s in the TOY MANUFACTURING COMPANIES.

It gets better.  Admittedly you need to move to Sweden but maybe it’ll catch on, like a beneficial virus.

A Swedish toy company produced a gender-neutral toy catalogue which is FUCKING AWESOME.  RUSTY BLAZENHOFF reported here.  Notice the girl with the gun in the pic below!  Other features include a boy and a girl together with home-making toys, cars, vacuum cleaners and more. 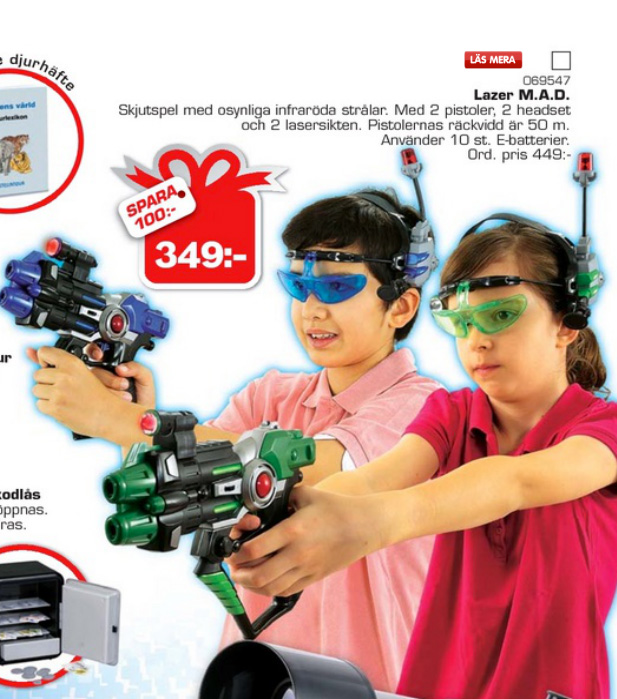 Other retailers have grappled with this issue. Earlier this year, Harrods, the London department store, opened a shop categorizing toys according to theme, not gender…

Lisa Wade, a sociologist and professor at Occidental College in Los Angeles, said Top-Toy’s gender-neutral approach is significant because it challenges common ideas about masculinity by putting dolls and hair dryers into the hands of boys…

In many cases, she says, she suspects the gender-neutral platform is a marketing ploy. “It’s a mistake to think that companies typically do this out of ethical belief,” Dr. Wade said. “Most of the time they are doing it strategically.”

The answer, in my opinion, is to make it worthwhile for the companies to use a gender-neutral platform as a marketing ploy.  If we, the consumers of toys, especially cool toys, support the companies who work with a thematic gender-neutral approach instead of dividing the sexes, then companies’ behaviours will change in an effort to chase the dollar.

I want cool toys, not to be stereotyped based on my gender.  I wanted this for future generations as well.