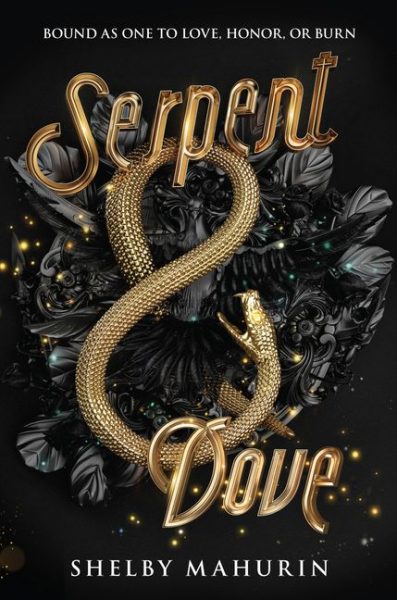 Lou is many things she isn’t proud of, a liar, a thief… and a witch. She spends her life hiding in plain sight. Being a witch will get you hunted and burned. Reid is all the things he is proud of. He came from nothing, an orphan found in the trash. And now he is the Captain of the Chasseurs, a team of God-appointed witch hunters. Serpent & Dove takes place in a setting where witches are akin to terrorists, a terrifying threat against mankind. The Church is fighting to restore peace by ridding the world of the devil’s magic.

In the midst of this tense climate, Lou and Reid find themselves pushed into sudden marriage at the direction of the Archbishop, trying to smooth out a PR nightmare.  Though neither is thrilled, they have reasons to play along. Reid is driven to appease his mentor. If Reid finds out what Lou really is, she will be burnt at the stake. Despite this risk, she needs his protection against something far more frightening.

Serpent & Dove is the exciting first release from American author Shelby Mahurin. This young adult fantasy fiction is a gripping first edition to a new series very much in the flavour of Sarah J. Maas’ A Court of Thorns and Roses series (a link I’m not the first to notice, given the front and back covers quote Maas).

There are two main story arcs to Serpent & Dove. The romance between Lou and Reid, and a threat to Lou’s life.

Romance isn’t unexpected. If you have ever read books of a similar nature, you can see very early on that love will bloom. It’s still fun to go along for the ride as the sexual tension builds and bonds form. But ultimately, the danger that Lou is hiding from is the page turner. The source and history of this threat take time before revealing themselves. This keeps things interesting until the end.

The way magic functions is a strong and interesting point in this novel. A witch has enormous power but for every act of magic she must give something of equal value. “Nature demands balance”. For example, a broken lock costs a broken finger.

Also, the use of magic leaves a distinct smell in the air, meaning practicing magic risks detection.

These details help create some tricky situations for Lou, and add some weight to the magic instead of it just being an easy fix-all, like in Harry Potter.

Christianity vs Witches – Men vs Women

Beyond the plot, the cultural set up of the story is really fascinating. The Church is based on historical Christianity, it’s entirely male dominated, and witches are the enemy. Every woman is treated with some level of suspicion or hostility.

While the Church and the men hold the authority, the women hold the magic, a type of power which rightly terrifies the men. Mahurin expresses and explores this power dynamic beautifully.

Ultimately, the book centres around this struggle for control, and the rights and wrongs on both sides.

Serpent & Dove is a delicious read. It aims at a younger audience (14 and over), though it includes a sex scene and a smattering of swear words. As a not so young adult, I read beyond bedtime on several occasions just to find out what happens. The story is the right level of suspense, fun and easy to read for an audience of any age. 4.5 out of 5 stars.