Seed begins with Daryl (Reedus), Rick (Lincoln), Carl (Riggs), and T-Dog (Singleton) in a house. They clear it of zombies and the rest of the group enters. Obviously a considerable amount of time has passed as Lori (Callies) is now very pregnant.

Walkers descend on the house the group cleared. They must flee. We discover the group has spent the winter scavenging houses they found on planned routes. While stopped to check the next route and hunt for food, Daryl and Rick happen across a prison. Rick decides it will be the perfect place for the group to make a home for themselves.

Andrea is shown to be very sick but has survived the winter with the aid of her still unnamed saviour from the season two finale.

It becomes obvious that tensions are high between Rick and Lori, but it is not yet clear if this is a result of Shane’s death or something else that is yet to be revealed. Lori voices her fears to Hershel (Wilson) about the baby, as well as Carl and Rick hating her.

Glenn (Yeun), Maggie (Cohan), Rick, Daryl, and Hershel go further into the prison to search for the infirmary and cafeteria. In the process, Hershel is bitten in the calf by a zombie. They bring Hershel to the cafeteria where Rick cuts off the lower half of his leg in an attempt to save him.

The episode ends with the group discovering they are not the only survivors in the cafeteria.

A fantastic start to what I hope will be a much more consistent season of The Walking Dead. I was concerned that finding a place to hole up so quickly into the third season would bring about the same stagnation that afflicted season two. However, the first episode is full of drama, action, amputation and new characters. New characters whose motives and allegiances are unknown. All in all, there isn’t much else they could have crammed in without making the season opener feel too full.

I’m eagerly waiting to find out what Lori has done over the winter to alienate both her son and husband. I need to know if T-Dog is ever going to have his moment to shine or if he’s just going to be the ‘token black guy’ for the remainder of the series. And what is the deal with Carol and Daryl’s little flirtations?

Hopes for the future after Seed

Hopefully the answers to all of the Seed questions and more  will be revealed as I delve deeper into The Walking Dead and, to be honest with you, dear reader — I can’t wait.

“How many women died in childbirth before modern medicine? If I come back, what if I attack it? Or you? Or Rick? Or Carl? If I do, if there is any chance, you put me down immediately.”

All of CJ’s reviews of The Walking Dead are here. 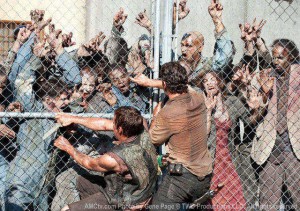 Updated on 30 October 2020 to fix a broken link and to kowtow to Yoast.