In my last installment of the Furbaby Diaries I reached the point where Seeing Eye Dogs Australia (SEDA) was about to assess me for suitability as a dog handler, aka a human who partners with a seeing eye dog.

Due to the pandemic, SEDA organized the assessment around lockdowns. Two staff had to come from Melbourne, which is (or was) – famously – the world’s most “locked down” city. They came in February 2021 to assess me.

SEDA assessment and the kitties (my new band name)

We had only just acquired our kitties, the week or two before. Meteor and Aurora were still really shy, treating hubby and I with caution. And yet, when these people who probably smelt of dog arrived, both the kitties decided they were ok. Shoelaces were a favorite. To be honest, I felt somewhat jealous!

The assessment involved lots of talking and looking at my NDIS plan. But it also involved me walking on my usual route with my cane, which I hardly used because using the cane properly gives me RSI. Which is why the NDIS approved me for a seeing eye dog assessment.

So. I set off on the shared (bike and pedestrian) path around the lake, with two SEDA staff following me.

They told me to walk at my normal pace.

THEY FOLLOWED AND FILMED ME FROM BEHIND.

Wondering if anyone thought this was super-creepy and would anyone say anything?

Then remembering both staff were wearing shirts that identified them as SEDA staff so other people probably realized this wasn’t creepy at all.

And I was SO hopeful and SO stressed about the assessment. So much mental pinball happening while I tried to calmly walk.

At one point I stopped and waited for them to catch up so I could ask which way they wanted me to go.

Their report said I “outpaced” them, lol.

We had coffee at Brew Bar, the best café in Greenway.

Then we returned, with one of the staff – the SEDA staff not the Brew Bar staff – holding a dog harness so we could pretend I was walking with a dog. 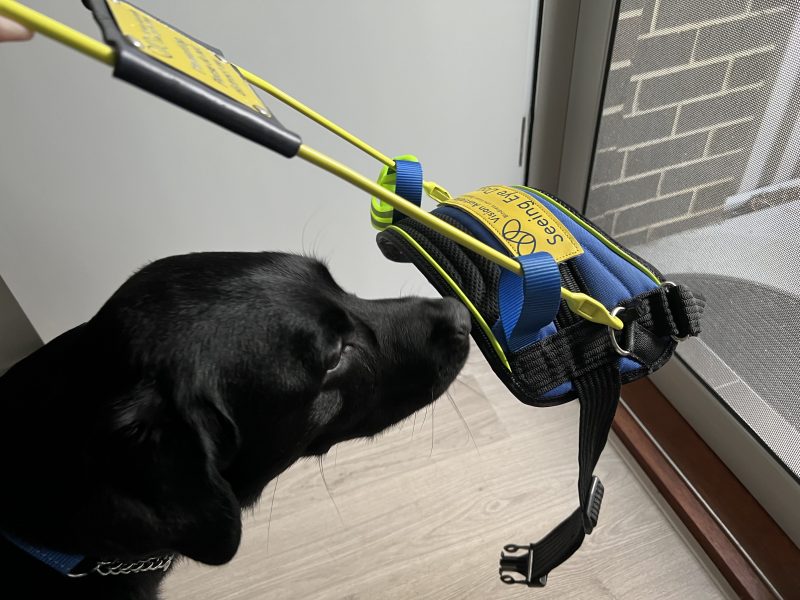 I tried taking a photo of an “invisible dog in the harness” to demonstrate what that looked like for my SEDA assessment. Actual dog, Silkie, says “I’m RIGHT HERE, ready to get into my harness!”

The other staffer groaned. I half wondered if he wanted to catch a taxi instead of walking back, but he persevered. Apparently I’m not the “usual” assessee.

Afterwards we talked some more then they left.

A week or so later, while I was recording this International Women’s Day podcast with Wendy Orr, Tabitha Bird and Elizabeth Knox discussing GRIEF of all things, SEDA phoned. I muted myself on the recording and answered the phone, explaining this was a bad time. And I asked if I could call back.

“Yes but I just wanted to let you know: SEDA has approved you for a dog!”

How do you not squee, not happy dance and not completely derail a discussion of grief after THAT news?!? I did my best.

After we finished recording the podcast and during the debrief and wrap up, I explained the disruption. Everyone celebrated with me! And Wendy Orr reminded me, months later, to include this anecdote in my blog series.

Then I applied for NDIS to cover a seeing eye dog. Another application. Oh Joy.

Next time: A SECOND NDIS application 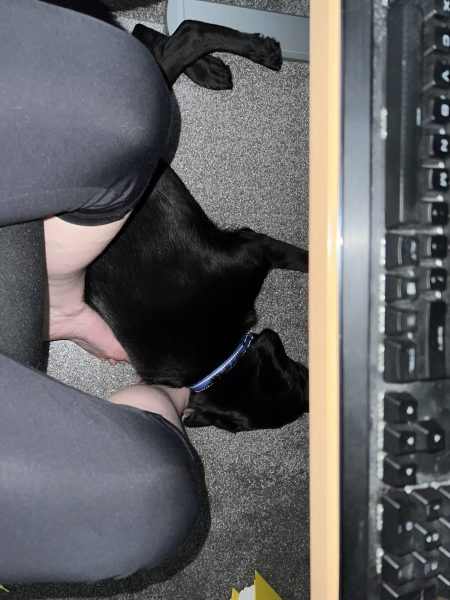 Usually Silkie lies beside me when I’m on the computer or hubby is sitting here. But I think she’s a bit upset about me taking that “empty harness” photo so now she’s lying in front of me and on my foot, telling me again “I AM HERE”. Being Silkie’s pillow just never gets old.