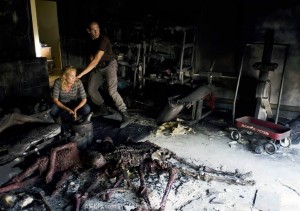 [Spoilers, Sweetie — review includes a synopsis of the episode]

‘Secrets’ begins with us discovering that Patricia, Otis’s widow, feeds the barn zombies with live chickens.

Maggie (Cohan) and Lori (Callies) both beg Glenn (Yeun) not to share their respective secrets. However, Glenn cracks under the pressure and confesses to Dale (DeMunn) that there are zombies in the barn and Lori is pregnant.

Shane (Bernthal) and Andrea (Holden) follow up on a lead for Sophia but instead they find themselves surrounded by zombies. Andrea manages to dig deep and kill many of the zombies. Once they have escaped she and Shane expend their excess adrenaline through copulation.

Dale confronts Shane about his vagueness when speaking about the death of Otis. Shane threatens Dale when Dale admits he thinks Shane is unstable.

Lori swallows several packets of morning after pills, fetched from town by Glenn and Maggie, but throws them up after deciding she wants to keep her baby. Rick returns from target practice to find the empty pill packets.

The episode ends with a confrontation between Rick and Lori about keeping the pregnancy a secret. As the confrontation winds down Lori confesses that she and Shane had been intimate. Rick admits that he has known all along.

When watching an episode of The Walking Dead, I write down scrawled notes as things happen. Then when writing an episode synopsis, I try to focus on the parts of the episode that I felt were most important and likely to affect the story longterm.

Unfortunately, ‘Secrets’ felt like it spent a lot of time stagnant and revisiting the same issues. Lori’s pregnancy has just begun and I’m already over it. If it’s focused on this much for the duration of the pregnancy, this will feel like the longest nine TV months in history.

‘Secrets‘ is not a bad episode by any means, but definitely one of the weakest I have seen thus far.