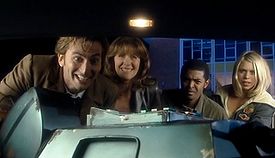 The Doctor (Tennant) and Rose (Piper) have been called back to Earth by Mickey (Clarke) to investigate strange occurrences at a high school where students who should be reprobates with ASBOs (court orders: think Misfits) are suddenly model students. The Doctor poses as a teacher while Rose becomes a dinner lady scoffing chips.

30 years after leaving Doctor Who, after the Doctor dumped her somewhere other than Croyden, Sarah Jane Smith, K9 and the Doctor are reunited. Finally. This is the school reunion.

Anthony Head (Giles from Buffy) features as the villainous headmaster who – literally – eats his students alive. Few actors could strike that perfect balance between villainy and total cheese!

‘School Reunion’ carefully targets the family audience with humor at school level – Rose even mentions how she used to think the teachers slept at the school – to the adults with ‘the missus and the ex’ comedy. The downside of the latter was it favored the male, putting women down, playing into the ‘trophy wife’ or ‘trading down (younger)’ stereotypes. However, ‘School Reunion’ is one of my favorite episodes of New Who, up there with the ‘Christmas Carol’ episode, in spite of its flaws.

I was devastated when Sarah Jane left Doctor who. I was a child. The ‘Hand of Fear’ was scary, Sarah was mind-controlled and mimicked before triumph. Then, when Sarah complained about being ignored YET AGAIN, the Doctor dumps her somewhere…

The TARDIS wheezed away, leaving Sarah Jane in a suburban street. First Sarah commented that it was not the street he said. Then she said it probably wasn’t even the suburb. In my childish innocence I was terrified for Sarah Jane, abandoned anywhere and anywhen. I gradually came to terms with her loss, reassuring myself because she chuckled as she walked away; knowing that it looked like Earth, and UNIT were out there, somewhere…

I didn’t like Leila to start with because of the ignominious manner in which Sarah Jane was dumped.

And now, 30 years later, Sarah Jane accidentally runs into the Doctor again. This was both brilliantly and appallingly handled. Although one of my favourite episodes of New Who to date, I still have issues with how Sarah was presented in this story.

The Doctor mailed K9 to Sarah in K9 and company (1981); K9 and Sarah then had an adventure. Although the pilot didn’t evolve into a series, I always assumed that the feisty journalist and her trusty companion would have continued having adventures, possibly even helping UNIT out over the years.

Instead, in this episode of Doctor Who, Sarah admits she’s spent her whole life – 3o years – waiting for the Doctor to return to her. At one point Sarah talks to the Doctor about the awesomeness of travelling with him and how hard it was to go back to a mundane life afterwards. However, when Sarah talks to Rose they squabble over the Doctor himself, neither mentioning the side-benefits of travelling with him. This was an epic Bechdel Test fail where it could have been SO MUCH MORE.

Jokes about the companions getting younger, the Doctor telling Sarah he didn’t visit because he couldn’t bear to see her getting older while telling Rose that SHE can stay with him forever — this all left a foul taste in my mouth while also making excellent social comment. Is the Doctor just some ordinary guy who dumps his wife once she gets a few wrinkles? Or is he the guy who’s lost EVERYONE he cares about so he’ll treasure those he has left? Is the Doctor an asshat who only cares about appearances? Or is he the savior of the human race who really cares about everyone, especially his travelling companions?

In the closing scene, the Doctor offers to take Sarah with him once more but she declines. Now she’s had her closure AND RECEIVED PERMISSION FROM THE DOCTOR, she’s now going to start living her life again.